Suburban wife Peggy Gravel (Mink Stole) is a paranoid woman who thinks her toddler son has gotten their equally young daughter pregnant, that the neighborhood kids are trying to shoot her, and that her husband Bosley (George Stover) is also out to kill her. Because of her instability, Peggy enlists the help of her hefty maid Grizelda (Jean Hill) to save her from Bosley and the woman ends up smothering him to death. Fearing repercussions from the law, the two escape to the trash town of Mortville, where they take up residence with lesbians Muffy St. Jacques and Mole McHenry (Liz Renay and Susan Lowe, respectively) and eventually run afoul of the strict rule of Queen Carlotta (Edith Massey). 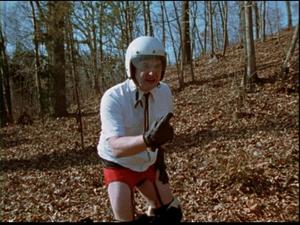 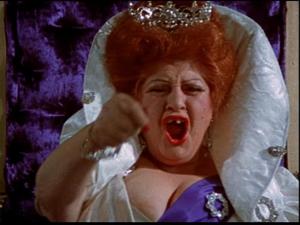 Carlotta despises the residents of the shanty town and proposes edicts that force the residents to walk backwards and wear their clothes the same way so she can ride through town and chastise everyone for wearing their clothes incorrectly. She is also the bane of her daughter Coo-Coo's (Mary Vivian Pearce) existence because she does not approve of the garbageman that Coo-Coo has selected as a suitor. Fearing what she can do to her, Peggy joins forces with Carlotta to infect the entire town with rabies, but they have no clue that the Mole, Muffy, and the residents of Mortville (with Coo-Coo in tow) are planning a revolt that will spell the end of Carlotta's reign forever.

John Waters last fully twisted film before edging towards the world of the mainstream with Polyester, Desperate Living is probably one of his most bizarre films outside of Pink Flamingos. Played out like a fairy tale on acid, the film features some of the most disturbing and oddly compelling ideas of any Waters film prior to this point. Waters already knew the concept of trash art well before this film, but he expands the notion of it to the nth degree here and makes a film just as shocking and satirical as anything he has ever made in the early part of his career. 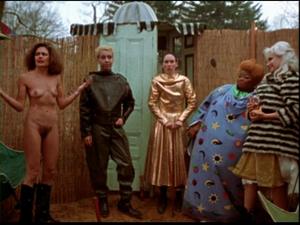 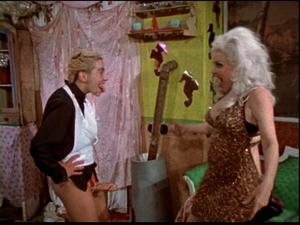 Waters satire in this film focuses on fascism instead of the horrors of suburbia and the results are interesting, to say the least. Waters regular Edith Massey, in her most important role as Queen Carlotta, portrays the fascist queen with so much anger that one expects her head to explode from the sheer hatred she gives off. She demands complete control over her subjects and death is commanded for anyone who shuns her. After a particularly rousing taunting of some backwards clothes wearing townsfolk, an angry Mole throws a mudball at her head and she immediately starts planning to give the residents rabies simply because she can't find the person who did it and wants revenge on all of them. Carlotta's iron fist is one that demands constant polishing.

As per usual, Waters holds nothing back when it comes to peppering the screen with some of the most disturbing visuals ever imagined by a filmmaker (and this is a comedy!). The first thing that comes to mind is the sex scene between Carlotta and one of her Nazi-like cronies. If you have never been introduced to the "specialness" of Edith Massey, then you have no earthly idea why this would be so creepy. If you do know who she is, though, then I think you may have a pretty good visual idea of such a scene going on in your head as you read this (and I pity you). Other creepy scenes are a lesbian tryst between Grizelda and Peggy, a cop who likes to wear women's underwear and french kiss their owners at the same time, and a climax that features rabies bites, vaginal gunshot wounds, and a cooked corpse that will serve as a banquet for a multitude of celebratory people. If any of this stuff sounds like entertainment to you, then this film should be right up your alley. 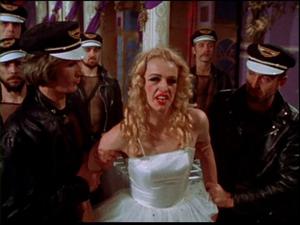 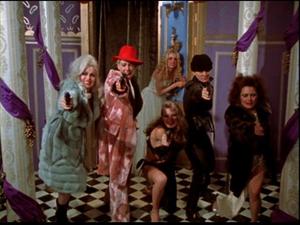 Amazingly, the film puts most of John Waters' later films in complete perspective and should be essential viewing for anyone only familiar with his more recent mainstream works. After seeing this film, most of the films that came after it seem positively normal and I feel safe in the knowledge that I can challenge anyone who hasn't seen it and thinks stuff like Serial Mom and Cecil B. Demented are "weird". This film makes absolutely no bones about its chaotic insanity, and that is perhaps the most interesting thing about it.

Desperate Living has been released on DVD as part of volume two of New Line Home Video's The John Waters Collection. The film (which is featured alongside Waters' 1981 film Polyester) is presented in its original full frame aspect ratio. The transfer is pretty decent for a low budget film and very few flaws can be found that werenít originally part of the source print. 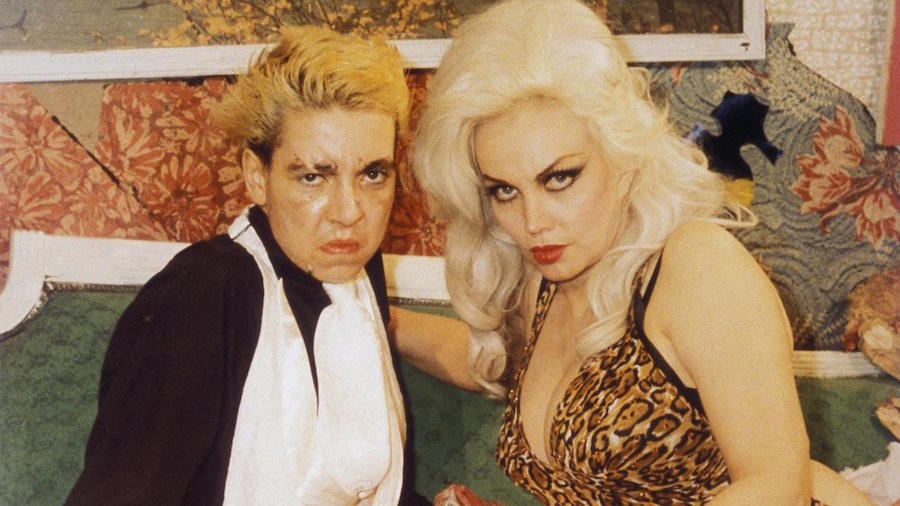 The only extras present on the disc are the original trailer (which reveals a little too much about the film) and a feature length commentary by John Waters and actress Liz Renay. The two were recorded separately and then edited together, with Waters dominating the track. This is kind of a good thing because I almost feel bad listening to Renay's portion, as she talks about time she spent in prison for lying on the witness stand during a mobster's trial and that she will pretty much accept any role she is offered. She also makes a plea for John to put her in whatever his next film happens to be. Waters, on the other hand, is his usual affable self as he discusses his last great paean to the world of trash culture. He also points out that the actor that had to perform the sex scene with Edith Massey was terrified to do the scene, which I don't find hard to imagine. Overall, it is a great track and one of the most informative I have heard for a film in a long time.

Though the film is a little rough around the edges and it certainly not for every taste, it is still an essential inclusion in the world of cult cinema and is required viewing for any Waters fanatics that have yet to see it. Coming packaged with Polyester and its Odorama card also makes it a disc well worth purchasing no matter what your take is on the film itself.