This is the first of several sequels to Demons, the 80s Italian horror film. Two key players also return in the form of director Lamberto Bava and co-writer/producer Dario Argento. Subsequently it comes as no surprise that DEMONS 2 also contains the same onslaught of gore, kick-ass 80s soundtrack, illogical sensibilities and WTFness that made the original so popular. They've even brought back actor Bobby Rhodes, albeit as a different character than the memorably pissed-off pimp of the first film.

DEMONS 2 takes the same basic concept -- People fighting off a multiplying horde of demons -- and relocates it from a movie theater to a high-rise apartment complex in an undisclosed German city. Just about everyone in the place (including a ten-year-old Asia Argento in her film debut) are watching the same horror film on their TV sets. 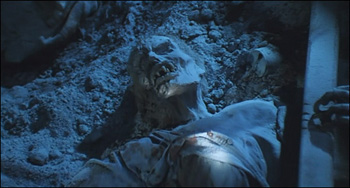 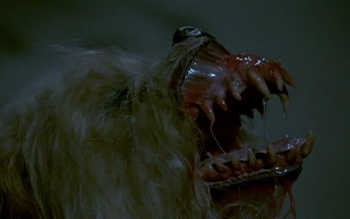 This is where things get a little muddled, so please bare with me here. The movie is supposedly the same one that was screened at the movie theater and helped in unleashing the creatures. However, certain references indicate it actually be taking place in the aftermath of the first DEMONS movie. This would mean that the reality of the original is now the fictional of the sequel with both coming from the same fictional movie. While you chew on that for awhile I'm continue. Don't worry the remainder of DEMONS 2 doesn't require a whole lot more thinking.

In one of the apartments, "drama queen" Sally (Coralina Cataldi-Tassoni) celebrating her sixteenth birthday while her parents are away. Her "teen" (read: mid-to-late 20s) friends are just starting to party-hardy when Sally throws one of many shit-fits and locks herself in her bedroom. They inexplicably attempt to get her to come out and rejoin her shindig. However, on the other side of the door, Sally becomes entranced by the horror movie when a demons bursts out of the T.V., VIDEODROME -style. Next thing you know there is are bloody jelly shoes and skinny ties everywhere...And several of the now-possessed guests stalking the corridors of the building. 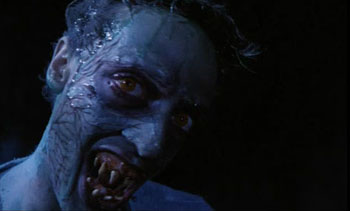 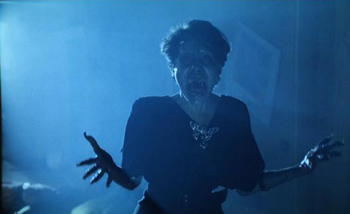 As normal tenants struggle for their survival the demons are revealed to have acidic blood (a la ALIEN) that is potent enough to eat through the floors and short circuits the building's security system, sending the place into complete lockdown.

Pretty, pregnant Hannah (Nancy Brilli) finds herself going mono-a-demono with a winged, baby demon whose only reason for even existing was the enormous popularity of GREMLINS a few years prior. Her husband George (David Edwin Knight) arrives and they struggle to figure a way out of the sealed building. 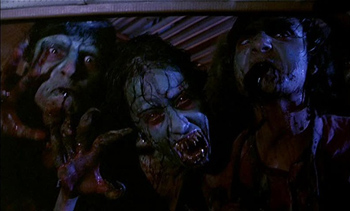 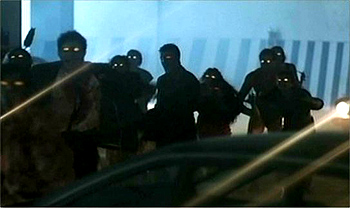 As they make their way down, they come across the clientele of the sub subterranean health spa fighting off the growing horde of demons. Leading the way is the previously mentioned Rhodes, now playing a pissed-off fitness instructor, who unleashes all out war against them in the underground parking lot. The result is a widespread fire, numerous vehicular destruction and a few of the creatures unleashing newfound acrobatic skills.

The couple are able to escape the building through an adjacent T.V. station (Yeah, I don't know either), where Hannah gives birth to a perfectly healthy baby. But what awaits them outside the studio doors, leading out to the world at large?

Comparisons have been made between DEMONS 2 and David Cronenberg's THEY CAME FROM WITHIN/SHIVERS since both share the same concept/scenario (A much better one could be made to the recent-years, Spanish [REC] series). This, however, is purely an apples-and-oranges situation. The former is one of the director's first forays in what would become his recurrent theme of the physical manifestations of horror. Its takes an intelligent, ground film with low-key violence. The latter, on the other hand, is a balls-to-the-wall splatter film with nothing more on its simple, little mind than to entertain...And that it does with such bizarre instances as a possessed dog and the previously mentioned baby demon.

DEMONS 2 also makes for the perfect "Backdrop movie" -- Something that plays during a party in the b.g. that'll occasionally catch the attention of your guests during one of its many moments of cinematic insanity.