Why horror fans and critics don’t make a bigger deal over Lamberto Bava's fantasy-becomes-nightmare horror romp Demons beats the hell out of me! I haven't had this much fun watching an 80's gore flick in quite a while and Demons matched the gruesome insanity of fellow demonic splatterfest The Evil Dead every step of the way. Demons is shamelessly loaded with plot holes, something that actually adds to the fun that you will have while watching it. Produced by Dario Argento and directed by Mario Bava's son, Demons is never just coasting along. It isn't particularly concerned with establishing much of a plot or any real underlying meaning; it's just out to have a head banging good time. If you don't find yourself possessed by the madness here, you are way too uptight. 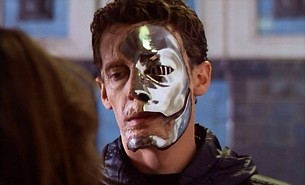 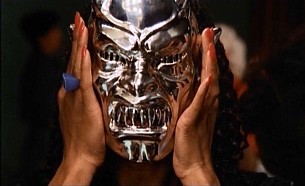 Demons picks up in a Berlin subway where a college student named Cheryl (Played by Natasha Hovey) bumps into a mysterious masked man who resembles Kano from Mortal Kombat. The man hands her two movie tickets to a recently renovated movie palace and then disappears. Cheryl decides to attend the movie that evening, bringing along her friend Kathy (Played by Paola Cozzo) who complains that the movie that is showing better not be a horror movie. Kathy's worst fear is confirmed when the girls arrive at the theater but two young men named George (Played by Urbano Barberini) and Ken (Played by Karl Zinny) offer the girls comfort during the movie. In the lobby of the theater, there happens to be a mysterious promotional set-up for the movie that features a bizarre mask. A young woman decides to put on the mask and when she takes it off, she ends up with a strange cut on her face. The movie begins and sure enough, it is a horror film about demonic possession. Shortly after the film begins, audience members begin finding themselves infected with a strange virus that turns them into demonic killers. As the demonic numbers rise, Cheryl, Kathy, George, and Ken have to band together and stay alive until help can arrive. 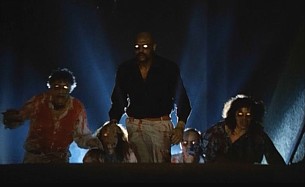 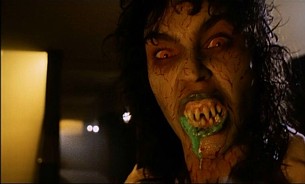 This variegated bloodbath is a pure 80's artifact, a film that packs the macho hero, relentless carnage, a samurai sword (of course), and a blaring heavy metal soundtrack to get your adrenaline pumping. It packs tons of impressive special effects and make-up work, the ghouls ending up simple yet foully intricate. Wounds ooze pus and blood and the ghouls vomit out green slime, any gross touch thrown in just to show off what the special effects crew is capable of. The film also manages to be a little freaky at points, Bava's camera peering down foggy staircases and dank alleyways, a silhouetted ghoul creeping in the shadows here and there. Demons turns out to be an energetic kaleidoscope of fury that is undeniably contagious. The lunacy reaches its max when our hero begins chopping off heads with the sword and a helicopter comes crashing through the ceiling of the theater. Are you intrigued yet? 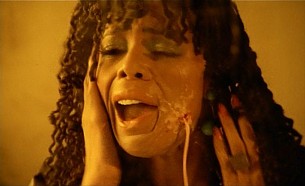 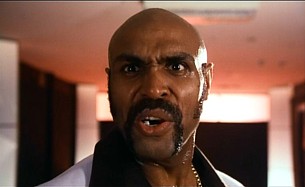 Demons has lots of incoherence littered about its eighty-eight minute runtime. Who is the strange masked cyborg man handing out the tickets? Are these people from the future? Another realm? And what about the suspicious theater usher? Don't bother trying to figure any of this out and just roll with the punches. Demons hearkens back to a time when going to the movies was an immersive event, to a time when the seats where rigged with a vibrating device to spook audience members (The Tingler) and barf bags were provided for the stomach churning insanity (Zombie). This is a film that should play in theaters today and feature some kind of gag to get the audience involved, much like The Rocky Horror Picture Show! The film is cool enough on its own to watch in the comfort of your own home, but if you showed this to a theater that interacts with the screen while downing a few beers in the process, you'd have a hell of a night at the movies. 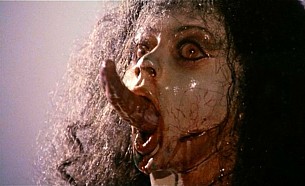 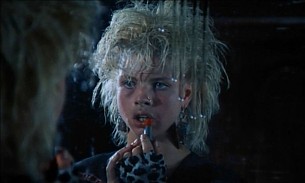 Demons doesn't ask much of us as viewers and is only concerned with our enjoyment of the content. The embellished final act is a must see, especially since while watching the first half, I couldn't imagine things getting any wilder. The fact that the film is game to take this twist on is enough to call this a blemished horror classic. Demons turns out to have all the makings for the craziest party you've never been to. Even a white suited pimp with a Fu Manchu shows up to play hero for a while! If you are a person who detests horror, believe me when I say there is enjoyment to be found in the gross out shticks that Demons is so fond of. This is, without question, an infectious experience, making it very easy to fall in love with this beast of a horror movie.