Director Dario Argento's masterpiece Deep Red borrows ideas from Alfred Hitchcock (Spellbound, Vertigo, Psycho and Rear Window) and Michael Powell (Peeping Tom) to deliver a unique, influential and still effective horror film. As originally released (at 126 minutes) Deep Red almost succeeded in combining a suspenseful horror film and whodunit detective mystery involving paranormal phenomena into a believable story. Unfortunately, the film was butchered for it's 1975 U.S. release into a 98 minute film DEEP RED HATCHET MURDERS which made little sense to critics and audiences. Anchor Bay beautifully restored and released the film on DVD a few years ago on a disc superior to the 120 minute version that was on Japanese import laser disc version of the film.

Genre film-makers throughout Europe, and particularly Italy were updating, and re-defining the horror film throughout the 1960's and early 1970's. Several years before John Carpenter's Halloween and the Friday The 13th films ushered in the new wave of slasher films in the United States; Italian film-makers like Mario Bava (Bay of Blood aka Twitch Of The Death Nerve) , and Dario Argento were dealing with similar ideas in films which usually include generous amounts of blood much more realistic than the gore which shocked audiences and outraged censors in such early 60's films as Herschell Gordon Lewis' Blood Feast and Two Thousand Maniacs. Argento's films, while easy to market as gore films were more than that. He established a name for himself with: The Bird With The Crystal Plumage (1970), The Cat O' Nine Tails (1971) and Four Flies on Grey Velvet (1972). Argento was dubbed the Italian Hitchcock and received some critical attention while developing a large cult audience. Usually his films show-cased his interests in parapsychology, new scientific theories and discoveries, and horror (pre DePalma's Carrie). Note: don't forget about Argento's Phenomena (1985) aka Creepers.

The film begins with an odd, pre-credit sequence resembling something David Lynch might have done circa Twin Peaks or Blue Velvet. A gruesome domestic murder witnessed by a child is staged in a manner where the actors seem like mime performers. The scene seems to have to little to do with the rest of the film until it is tied into the film near its conclusion.

Then the Tubular Bells sounding electronic produced theme begins as the credits roll. The soon to be better known group of studio musicians named The Goblins (Romero's Dawn Of The Dead) created a loud often jarring synthesized score for the film which was quite innovative and controversial in it's time. 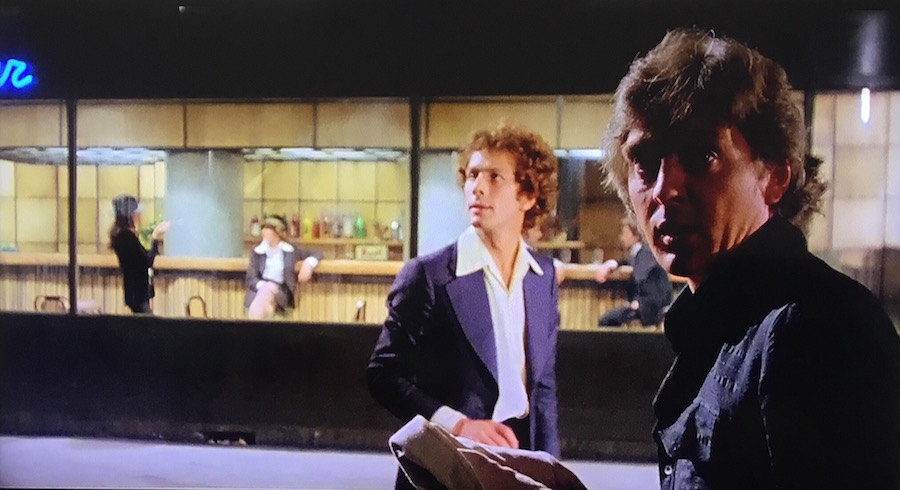 Helga (Macha Meril) a famed psychic, and other experts are discussing the existence of telepathy among animals and insects at a symposium on para-psychology in Italy. Helga demonstrates her psychic ability by picking a man out of the audience, telling him his name, what's in his pocket, and more. Suddenly her thoughts are disturbed and she 'feels' the presence of a violent killer in the room. The killer apparently is letting her 'see' a violent murder. She is very upset with this and before she can identify who is invading her thoughts, the person responsible flees the auditorium.

Later that night, Helga is murdered in her apartment. As this occurs, her jazz pianist neighbor, Marc (played by Blow Up's David Hemmings), is outside in the plaza, several floors below. He looks up at Helga's apartment and sees her being attacked. In fact, Helga and Mark seem to make eye contact (impossible because of the distance and it is night). Mark rushes to her apartment but Helga is dead.

The police arrive and question Marc, who isn't able to give much assistance but can not help feeling that he has seen something he can't quite remember --an important clue he is sure will reveal the killer. Although he is supposed to leave the country, he is compelled to stay to find the murderer with the help of a very aggressive and beautiful female reporter, Gianna (who likes him of course). Daria Nicolodi does not play Gianna as a victim but as a strong, quirky, aggressive woman. Marc and Gianna will work together to uncover clues which reveal some character's secrets and lead them to the killer. In the process other brutal murders occur.

The acting is uneven. David Hemmings is underplaying his character while Daria Nicolodi has too much energy and comes across too hyper and annoying at times. Argento and his cinematographer Luigi Kuveiller create a third character with how the camera is used. At times the camera meanders over everyday objects, making them somewhat menacing and directing our attention with too close, close ups to various clues. The editing at times is quite jarring. Did we just see a flash frame of the murderer's face? Is there someone lurking in the shadows there? Cutting to odd angles also keeps us off-balance. The use of vibrant red colors predominates throughout the film.

The occasional brutal violence has greater impact because we can almost feel the victims pain. We all know what it is like to be burned with scalding hot water, so the murder of a woman involving a bathtub of boiling hot water is quite disturbing. Everyone has experienced bumping into the sharp corner of a table and so the scene where a man's head is brutally slammed into the corners of a table and mantel is instantly unsettling and disturbing.

The film's pace at times is too slow, giving us too much time to think about the plot loopholes and inconsistencies. It will seem odd at first that Marc's character is a jazz musician rather than a vacationing police detective whose hobby is jazz. Florence and to a lesser extent Turin is a European center for jazz lovers, but Marc acts more like a movie version of a police detective than a jazz musician through most of the film.

However, a valid way to look at the film is to recognize that Director Argento has quietly set up the motivation for the character in an earlier scene and we've quite possibly missed his too subtle attempt.

During the scene when Marc witnesses the murder of his neighbor Helga (the psychic) they seem (illogically) to make eye contact.

I believe Argento means to suggest that a psychic connection between the two has been made and it is this connection which affects Marc's behavior and is the reason he is obsessed with solving the murder before he leaves the city.

Later on Marc recalls he saw something in his neighbor's apartment, yet he doesn't quite remember what it was. Perhaps what he 'saw' was what his neighbor somehow telepathically show him where the last things she saw were, as she was killed, when they made the eye contact?

Marc reacts to hunches, and seems to almost have some sort of psychic ability later on in the film, though he refuses to completely acknowledge it. Almost instinctively, he is drawn to an old house he believes holds an important clue. Yet at first, because he is trying too hard, thinking too much and not 'feeling' he is unsuccessful in finding anything. Yet, he is drawn back to the house a little later and is successful in uncovering a secret.

In another scene, Marc's alcoholic musician colleague speaks with him about psychic impressions. Then, Gianna talks to him about his nervous tics and quirks which Marc tries to explain away (wonderfully) as being a perfectly natural part of being an artist -- A musician whose sensitivities lend themselves to be more sensitive to para-psychology phenomena perhaps.

The "House of the Screaming Child" that is featured in the film is Villa Scott an art deco mansion in an elegant Eastern suburb of the city. At the time of filming, it was abandoned and rumored to be the place Witches gathered and held 'black masses.' Profondo Rosso was the second biggest Italian domestic box office hit of the 1970s and played theaters for several years. Cab drivers even call CLN Square, Piazza Argento (Dario Argento).

Thanks to Luca Signorelli for providing some additional information for this review.