The 1980's was the era when movie franchises got weirder and weirder. Take a look at Rocky for example, it started as a really good inspirational sports-drama about a guy who wants to prove himself. Then there was Rocky IV, the most over-the-top Cold War movie in history (but entertaining as hell!). Death Wish is another franchise that falls into this category. The first Death Wish movie is really dark, disturbing, and realistic, while Death Wish 3 is literally a post-apocalyptic movie. I'm not kidding! It's the Cannon version of every 80's Italian Escape From New York knock-off you could imagine meets the Death Wish franchise.

Paul Kersey returns to New York City once again, but this time it is overrun by punks and gangsters. After one of his old friends is killed by Manny, the sadistic leader of a gang, Paul is mistakenly arrested by police. Luckily (or not), Chief Richard releases him and offers a deal to Paul: that he can shoot any criminals he wants, but he has to give up info so the police can bust more of them and make the news. Then, like clockwork, lots of Paul's new friends are murdered by Manny & Co. so he just takes revenge on all of them.

We have to look on the bright side, this movie shows us how corrupt the cops are. They can't protect the city and are scared of the gangsters. Not only that, they take away the citizens' guns (they claim that "You can't carry them in a limited zone"). Really? You can't protect yourself from gangs since the cops won't do it? This is why I call the film a dystopian version of Death Wish. These gangs are so ruthless, they might steal your TV or kill you right on the street without repercussion. 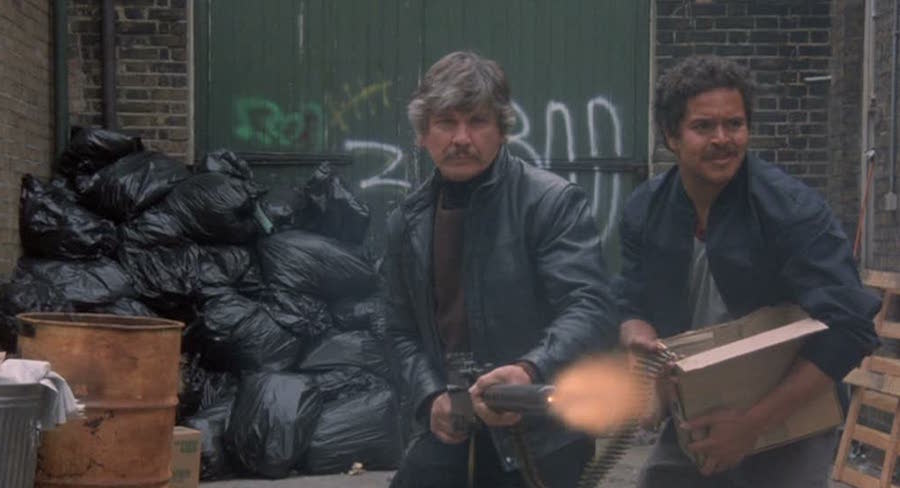 If that's not crazy enough, the finale has Paul and his friends shooting TONS of criminals. I think at this point it's not even a movie, it's just a live action video game! Honestly, I wouldn't be surprised at all if I find out that this film inspired NARC, a classic run-and-gun arcade game from the late 80's. Both are really violent, over-the-top, and extremely cathartic. And as I said before, the cops take away your gun while our hero can protect the small town with his. I'm pretty sure that this film could be a propaganda for the NRA. Why? We have a good guy with a gun to fight bad guys with guns...just like the NRA motto. And we have the "negative" effects of taking away people's right to bear arms. I mean, I'm not a gun nut, but I think everyone should be able to have a gun to protect themselves while government controls gun ownership at the same time....just to make sure that criminals won't be like they are depicted in this film.

There are two small details I'd also like to point out here. First, there's a scene in which Maria (played by Marina Sirtis, a.k.a. Deanna from Star Trek: The Next Generation) is raped by a gangster. Some people, especially Trekkies, might find that disturbing. Another is the fact the soundtrack for this movie was done by Jimmy Page. Yes, the same Jimmy Page from Led Zeppelin. It's cheesy but still awesome and really memorable.

Keep in mind that this film was made by Cannon, a studio that made B-movies on Hollywood size budgets, so you'll be satisfied for sure! In fact, it shoots straight to the top of the list as one of my favorite films from Cannon Films (beside Invasion U.S.A. and Invaders From Mars 1986). Recommended!