Dawn Of The Dead/European Cut Review 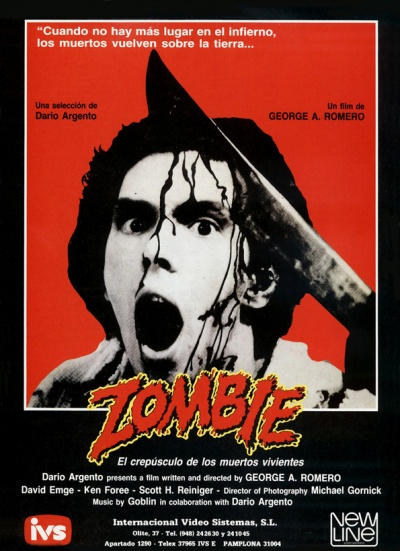 Dawn of the Dead is one of my favorite films of all time. Not only does it give us an exciting storyline, but also asks many questions about humanity and consumerism. As all of you may know, there are several cuts of the movie and today I'll tell you about the European Cut. It was edited by Dario Argento, one of the producers of this film.

The basic story is still the same. A group of four people including Steven, Peter, Roger, and Francine decide to escape from the zombies in a shopping mall. Unfortunately, this huge place will soon become a prison of consuming. Although some of the original scenes were cut (I'll tell you about that later), there are several that don't exist in the US cut. For instance, after they get stuck in the mall for the first time, Stephen brags that they are more clever than the rest of other citizens because they've managed to escape the zombies while Peter warns him not to underestimate them. As you can see, this shows us how self-indulgent Stephen is. Also, there are several alternate camera angles featured in this film. Believe it or not, some look better than the US cut!

Since this version is shorter, there are several scenes that were cut to give a fast-paced Action/Adventure feel, while the US cut gives us more of the Horror atmosphere. For example, the zombie helicopter scene and the very final scenes in which one of the bikers gets bitten by a zombie while he has a blood-pressure test. To me, some of the scenes that were cut are necessary to give more dimension to the characters. One of the scenes that isn't included in the European Cut is when some police officers ask our heroes: "Do you have any cigarettes?" and our heroes say no. Then, one of our heroes smokes! It shows us that people are sometimes selfish when a disaster happens. Also, some of the black comedy elements in this film were cut. For example you could hear a mall announcer telling about the latest promotions. I say it's a black comedy because the tone of the announcer's voice is very deep and slow...just like a zombie (another social commentary, by the way). If you've seen the standard US version before, you may actually think that this cut is too fast and awkwardly edited.

What about the music? Since they didn't have rights from De Wolfe Music library, all of the songs are done by Goblin. In my opinion, some of them are much better and more appropriate. Like the final scene in which **SPOILER ALERT** Peter decides not to shoot himself and then fights the zombies. The music in the US version is too campy while this version has a kick-ass rock theme which is more appropriate. Unfortunately, there's a song that's played over and over and over and over and over again. It's called "Zombi" which is the second track on the soundtrack album. You might think that I'm totally exaggerating about how many times that this song gets played, but trust me, you could play a drinking game (in which you have to drink every time you hear this song) while watching this film.

Although it has some flaws, The Argento Edit is surprisingly better than what I expected. In fact, this one is almost as good as the US cut. It might not have the social commentary or full dimension of characters in some aspects, but it's still very entertaining and enjoyable. Recommended!