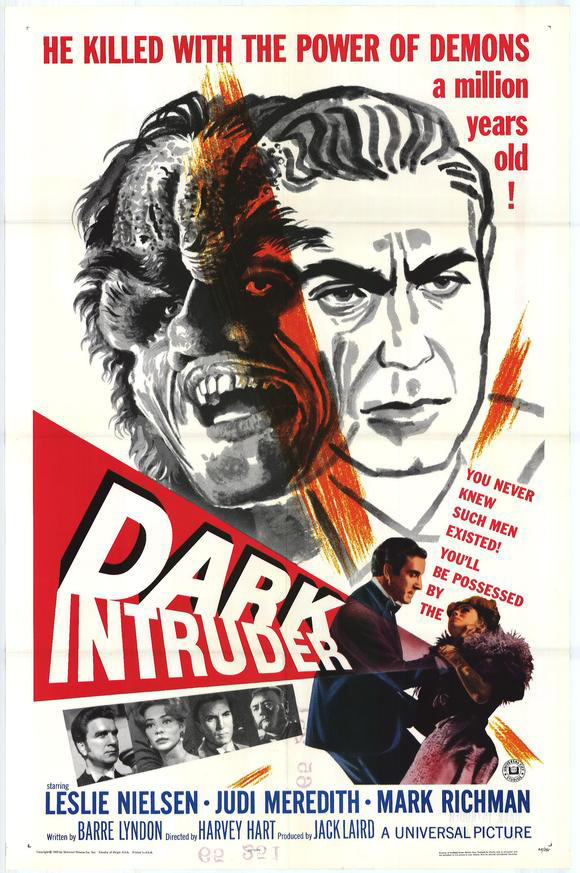 Dark Intruder (1965) is a horror film made for TV that was released theatrically, and starring Leslie Nielsen, Mark Richman and Judi Meredith. The film is set in San Francisco in 1890 concerning playboy sleuth and occult expert Brett Kingsford (Nielsen). This atmospheric black-and-white film is only 59 minutes long, was directed by Harvey Hart, and was the pilot for a failed television series called The Black Cloak and was written by Barré Lyndon. The Black Cloak was to be produced Alfred Hitchcock's television company, Shamley Productions, which also produced The Alfred Hitchcock Hour and Thriller. When the show was deemed too scary and violent for mid-sixties television,[dubious – discuss] NBC sold it to Universal, who sold it to drive-in theaters as the second feature on a double bill that also included William Castle’s I Saw What You Did (1965). Dark Intruder showed up from time to time on late night TV through the 1970s, and it received a release on VHS, but it has never (officially) been released on DVD. In plot and character it greatly resembles Chamber of Horrors (1966), which was made the next year and had a similar fate. Critic Leonard Maltin wrote that Dark intruder featured: "Intricate plot and exceptional use of the time period blending with suspense" and that this made it "a one-of-a-kind movie." The movie appears to be unreleased on either VHS or DVD. (Wikipedia)