The late Italian Director Mario Bava was best known as the king of gialli and gothic horror cinema in the 60s and 70s (take another look at classics like Black Sunday, Black Sabbath, The Whip and the Body, Planet of The Vampires, Dr. Goldfoot and The Girl Bombs). With his 1967 film Danger: Diabolik, Bava took a dip into a new genre: the comic book movie. Diabolik showed that Bava could truly do it all. By bringing his incredible design talents and atmospheric visuals to the project he took a low budget production and made it something truly unique. The film was produced by Dino DeLaurentiis who was looking to bring the immensely popular Diabolik "fumetti" (Italian for comic book) created by the sisters Angela and Luciana Giussani, to the big screen. A young up and coming star John Phillip Law (Death Rides A Horse, Barbarella) auditioned and he got the lead role. Law was a tall, lithe actor and his features were strikingly similar to the comic book character. 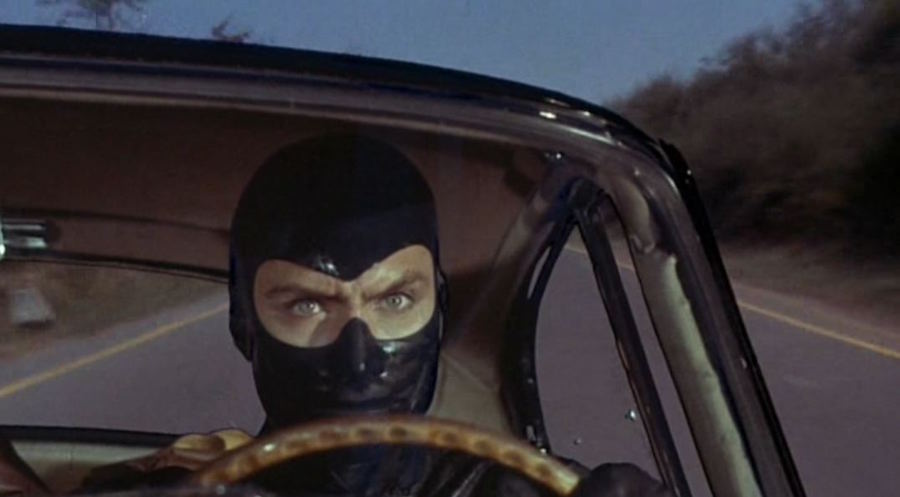 Diabolik is your true anti-hero. There is nothing about him that is particuarly good since he is merely out for himself. He is like an anti-Robin Hood in that instead of stealing from the rich and giving to the poor he steals from the rich and gives to himself! His partner in crime is the beautiful Eva Kant (Marissa Mell). Together they are the perfect criminal team. The film's depiction of the Diabolik character is actually more humane than the comic book version who was very violent and known to kill his enemies at any cost.

Mario Bava creates an incredibly psychedelic world for the cinema adaptation. When we first meet Diabolik he is trailing the police who have set up a trap (a car holding a load of cash) to lure him into the spotlight. When the police motorcade reaches the docks, Diabolik sets off a smokescreen and steals the automobile holding the cache of money. Diabolik throws the bags of dough into his speedboat and then dives into the water. This is where we see the trippy opening credits roll as Il Maestro Ennio Morricone's equally strange Diabolik theme plays accented by a fuzzed out electric guitar and female singer Christy's voice repeating the words "deep deep dowwwwn".

Diabolik speeds off in his boat, then Bava cuts to the highway where we see Diabolik in his black Jaguar being chased by police helicopters. This sequence showing Diabolik driving like a bat out of hell is partly done using rear projection which gives it a real "movie movie" look. Diabolik manages to elude to police helicopters and he picks up his partner Eva in a tunnel and they speed off in her cool white Jaguar. Diabolik enters his secret underground lair through a electronic door which is made to look like a piece of the landscape (similar to the entrance to the Batcave which was used in the 60s Batman TV show starring Adam West). This secret moving mountain entrance is another trick shot by Bava. While the car does move down a hill, the actual mountain is a fake foreground image. 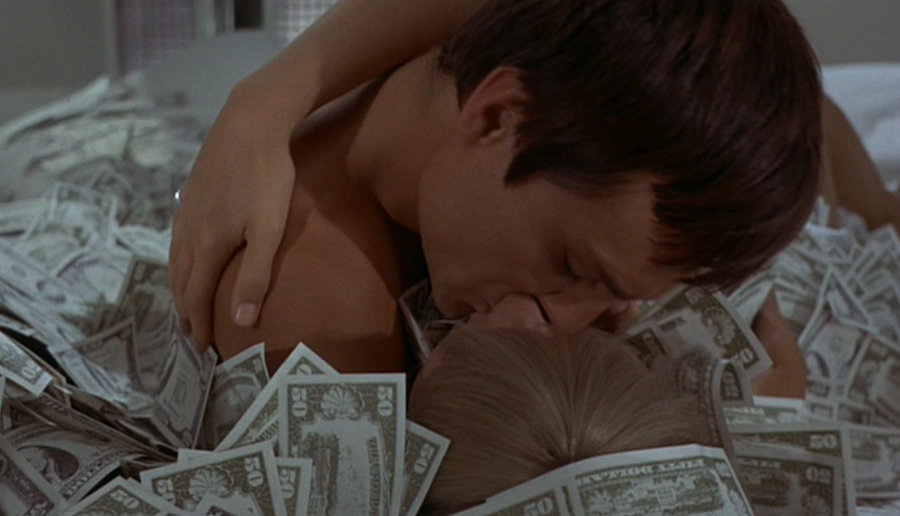 Watching Diabolik and Eva being transported to the depths of the secret lair while they kiss passionately is a really amazing look at Bava's incredible set designs. He utilized all kinds of trick photography including using a lot of matte paintings which were placed in the scenes to cover the empty backgrounds. Look closely at the first wide shot of the lair, it is an inserted matte painting!!

Diabolik opens his secret underground safe to deposit the cash, but then he stops and thinks. Diabolik doesn't put the stolen money into the safe right away, he instead chooses to make love with Eva IN the money (NICE!) The round bed spins around as we see the mounds of cash spread all over it. Suddenly Eva's naked body rises up from under the moulah. This is one of the most popular scenes from the film.

Both in the comic book and in the film version, Diabolik's main enemy is Inspector Ginko (Michel Piccioli) who's out to stop him by any means. Not only is Ginko after Diabolik in the film, but another crime figure named Valmont (Adolfo Celi) is also looking to get rid of Diabolik so he can keep the crimeworld under control. Throughout the film, Diabolik has to contend with Ginko and Valmont and his henchmen as he tries to steal everything from priceless diamonds to an immense gold ingot. The film never stops its rapid pace and theres a chase, a fight or a heist happening at every turn. 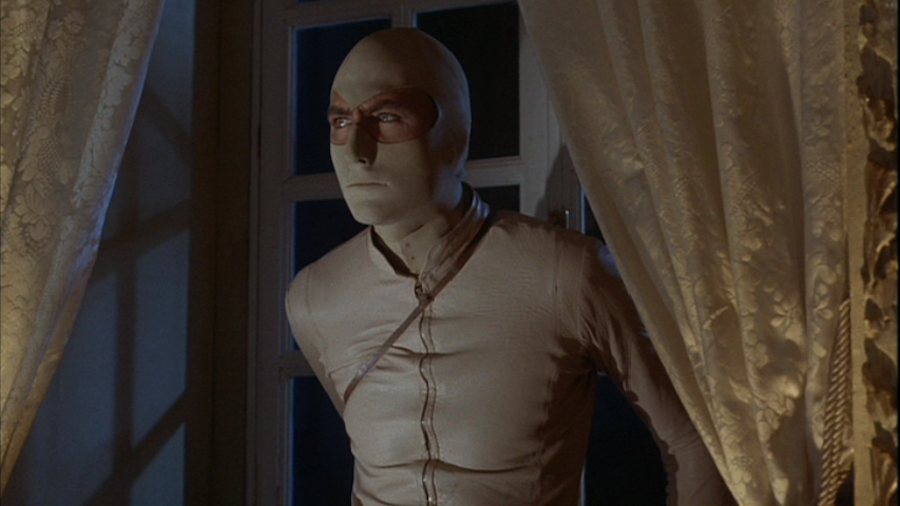 One of the highlights of the film is a cameo by British character actor Terry-Thomas (How To Murder Your Wife) as one of the heads of finance. Diabolik and Eva disguise themselves as reporters and attend one of his speeches in the city. They then set up a diversion with laughing gas which makes the whole crowd laugh uncontrollably and the finance director is made to look like a complete goof.

Danger: Diabolik works not only as a great comic book adaptation but an exercise in style. Bava was definitely not one to make boring looking films. Every scene has some kind of visual flair. From his use of colorful set designs, rear projection, matte paintings to extreme close ups, Bava gives the viewer a full pallette of eye catching sequences. Like his friend Sergio Leone, Bava used the widescreen format to really create an alternate world where the fantastic came to life. While Bava's design genius is certainly unquestionable, there are a few scenes where the FX are not as well executed (look for the airplane sequence where we see the fake rotating sky beneath the plane's trap door).

Diabolik is the kind of film that definitely should be studied by set designers, cinematographers and directors. There's so much creativity and visual tricks to discover within the film and Bava was a master of them all. Danger: Diabolik is an excellent work of pop art cinema and one of the best comic book adaptations ever made. 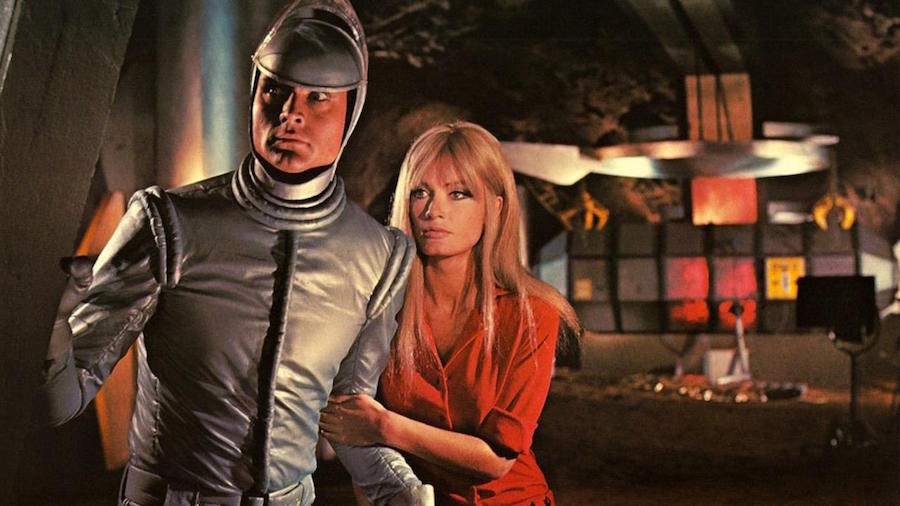 - This review is dedicated to the memories of Mario Bava, Marisa Mell and John Phillip Law -