Before there was Johnny Firecloud, Jack Starrett gave us "Vittorio!" Cry Blood, Apache (1970) opens with an older Pitcalin (Joel McCrea) riding to a secluded location in the desert. Upon arriving the viewer is given a flashback of a terrible series of events that occurred in his youth. The opening scene involves an amiable group of Native Americans and outlaws enjoying themselves with drink, song, and dance. Eventually, one of the natives slips and falls revealing a small stash of gold nuggets. Feverish with greed, the outlaws begin to attack the natives for lack of explaining where they found the gold. All but two women are killed; they are assaulted and one is beat to death. The last remaining female, Cochalla (Carolyn Stellar of Devil Times Five), agrees to lead the band to the gold. Shortly after breaking camp, the lone Apache, Vittorio (Dan Kemp), finds the carnage and his reaction implies that the slain are most likely his family. He sets out to track down the men responsible and provides a slow agonizing death to all but one, Pitcalin. 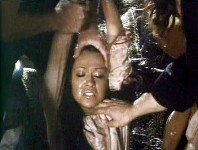 On a scale of great Westerns, Cry Blood, Apache fairs pretty low. However, in the realm of Jack Starrett-directed revenge flicks, it works. The action tends to take place too late in the film. The majority of the movie's arc involves the small band traipsing across the desert asking, "Are we there yet?" With the help of a few veteran exploitation/biker film players, Starrett manages to pull off a decent movie. Starrett himself plays "the Deacon," a conflicted Bible-quoting outlaw who continually promises God that he will build him a church...if God will help him find some gold. In once scene, Starrett's character quotes scripture over one of the slain Indians. When he's done, he scalps him saying, "that should cover the cost of services, don't you think?"

In addition to Starrett, "Two Card Charlie" is played by Robert Tessier who, from 1967 to 1971, would appear in seven biker flicks beginning with Born Losers (1967) and this list would include an uncredited role in Starrett's own Run Angel Run (1969). Although Messier plays a marginal character in Cry Blood, Apache, he brings a "biker" sensibility to the part. The younger Pitcalin is played by Joel McCrea's son, Jody McCrea, who had made a name for himself playing mostly in Beach movies throughout the 1960s. By 1970, McCrea had appeared in The Glory Stompers (1968) and Scream Free! (1969), a Bill Brame-directed biker/drugsploitation farce (featuring Casey Kasem in the act!). Dan Kemp, who plays the vengeful Apache Vittorio, had played in Starrett's Run, Angel, Run, The Losers, as well as Al Adamson's Hell's Bloody Devils released in the same year.

Any incongruities in this film are somewhat justified by the fact that Starrett was in a whirlwind of activity at the time this movie was being shot. According to Jack Starrett's imdb entry, he released three films in 1970 each just one month apart. Starting with The Losers in August, Cry Blood, Apache in September, and one of his first made for television movies, Night Chase, in November. It's not certain when he shot the footage for Cry Blood, Apache, but this can be considered a decent film under these circumstances.

The fact is, this movie is a Western, but the only thing preventing it from being a biker flick is that the script is set more than a century before the internal combustion engine. If you can get past a slow rambling buildup; one extremely awful knife fight toward the end; and the fact that sometimes there's snow on the ground and sometimes there's not, you'll find this picture somewhat enjoyable. Besides, it's Jack Starrett! 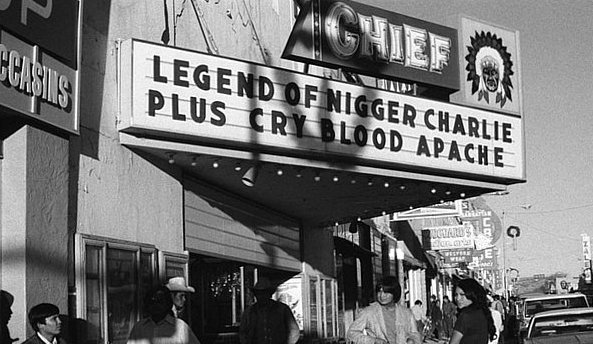 1972: The Chief Theater in Gallup, New Mexico - Double Feature of The Legend of Nigger Charley and Cry Blood, Apache