Two drug dealers named Alex (Bill Osco) and Ray (Jason Williams) score a large amount of coke. Soon after they hit the desert roads to head down to the Mexican border to sell the yayo for $100,000. You may notice the car they are driving is a little out of place. Its not a jeep or even a sportscar, its a Rolls Royce!! I'm talking the kind the upper crust get chauffered around in to them fancy parties (riiiight). Before they get anywhere, the cops block them in and a gunfight begins. You'll never see a more close quarters gun battle than this. These guys are basically crawling around the sides of the cars playing hide and shoot with the cops who are 5 feet away armed with shotguns. These cops are so dumb, they dont even have any peripheral vision. Using his ninja skills, Alex crawls under the side of one of the cars and the cop (who is directly above him) doesnt notice him until its too late. After taking out all the heavily armed cops with super marksmanship skills and cunning, Alex and Ray finally get out of there (miraculously) and continue on their way. As I was watching the film I noticed their car was driving along and there were no bumps. Yet they are driving through a desert. Whatever! 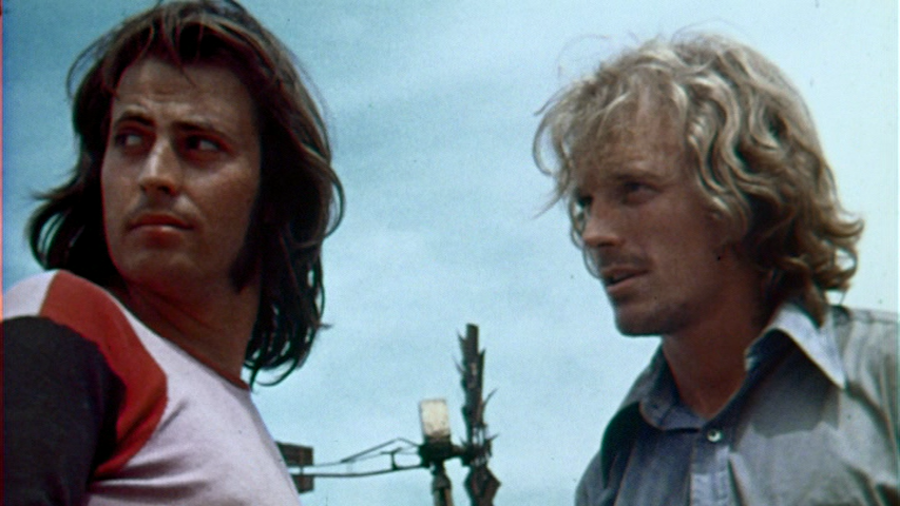 The guys get to a small city (wait, I thought they were in the desert heading to Mexico?) and Ray makes a call to the seller who is waiting for them. Meanwhile, we see a group of girls at an ice cream truck complaining about not getting their "lemon slushes" or whatever it is they ordered. Ray and Alex decide to ditch their old car and they walk over to the girls and proceed to start some shit with the old ice cream man. This guy is hilarious! He has this high pitched, whiny voice. Ray gives the girls their ice cream and then they "ice cream jack" the van. Ray and Alex drive along and taunt the ice cream man like a little child. Its pretty funny. Finally Ray gets fed up with the whiny ice cream guy and hangs him out the side and proceeds to pistol whip him in the face. Right On Ray! Then he just throws him out along the desert like a finished cone. As they cruise along in the ice cream van, a cop begins tailing them and puts on his lights. Of course, the guys dont stop, they swerve back and forth and when the cop drives up next to the van, Ray blows his head off with a shotgun. The guys stop at a gas station to make another vehicle switch, and this is where we meet Karen (Diane Keller) who is with her boyfriend, who Ray proceeds to shoot only after shooting the poor gas station attendant in the head first. We can see Alex likes Karen, but Ray treats her like a whore, they kidnap her and Ray finds a sexual book in her car and screams at her to "READ IT!!". Karen cries and tells him no, so Ray begins groping on her. Meanwhile Alex is driving the car doing and saying nothing as he's being bumped around. NOTE: They're all in the front seat. Finally after about 5 minutes of looking over at the two and acting like a mime, Alex pulls over and tells Ray to get out of the car. Ray gets out and the two argue and fight a little. Alex tells Ray to chill out and to not hurt Karen...or else! Ray relaxes a bit and the three head to a hotel. Ray goes out to get some groceries while Alex and Karen get to know each other better. In a touching scene, Alex shows Karen how to snort cocaine with a 1 dollar bill. While picking up some domestic items at the store, Ray notices a cop outside, so he ducks into the backroom of the place. The cop walks into the store and looks for Ray. This is where we get another "sight impaired cop" scene, as Ray hides behind a box of soda 2 feet away from the pig. When the cop spots Ray right next to him, its too late and Ray hits him, then stabs him about 5 times and makes sure to wiggle the switchblade around in his stomach just enough so the blood will squirt out real good! As Ray leaves the store he tells the owner (who inquires about what is going on) that he "just went to grab his quarter which rolled away from him". Ray, Alex and Karen finally arrive at the coke buyer's home and what happens after that is the only secret about this movie I'll keep! I know for sure after reading this review, you want to know it, but I'm not telling!!

You can tell Cop Killers was heavily influenced by Easy Rider (one of my favorite films ever) right down to the groovy music/car driving montages (which seem to occur every 20 minutes in the film). While the film is watchable, the acting is horrendous even for a B film. These guys are such amateur actors, every line of dialogue they deliver contains no emotion. Its either Ray screaming and yelling or Alex with that kind of dull, deadpan/bad movie type of talking. While the acting is completely terrible, the make up/special effects were really well done. Lots of squirting blood and tore up faces. The reason for that would be because future Special FX legend Rick Baker (An American Werewolf in London) created them. That bit of coolness aside, I wouldnt reccomend this film to anyone unless you are a 70s B movie completist. DON'T LET THE COOL THEATRICAL TRAILER FOOL YOU!!