Difference between revisions of "City Of The Living Dead/Review 2" 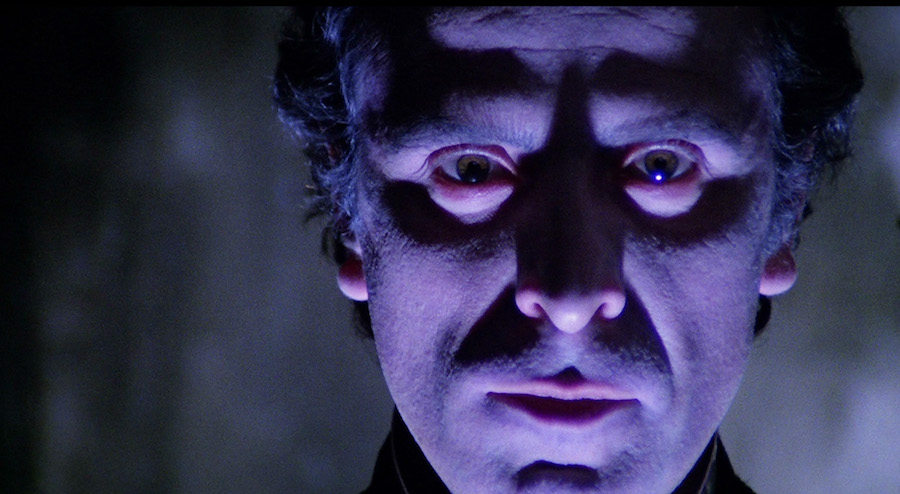 When an aloof priest named Father Thomas (Luciano Rossi) hangs himself in a cemetery in Dunwich, Massachusetts (a city supposedly built over the remains of the famous witch town of Salem) he inadvertently opens the gates to Hell, allowing the dead to rise and terrorize the small town. A psychic named Mary Woodhouse (Catriona MacColl) sees the priest's actions in a vision during a seance and supposedly dies from the shock of the apparition. Peter Bell (Christopher George, who bears a little resemblance to George Segal), a reporter who is investigating Mary's death, happens upon her freshly dug grave and discovers her to actually be alive, rescuing her from her coffin before she suffocates. Safe at home, Mary explains the ramifications of Father Thomas' actions and enlists Peter to travel with her to Dunwich in order to close the gates before All Saints Eve, when they will swing wide and allow the earth to be engulfed by the living dead.

Italian horror film master Lucio Fulci brings yet another gore filled extravaganza to an anxiously awaiting public with City of the Living Dead (which was known as The Gates of Hell in its original US release). Fulci was always known for his grue filled films and he was never one to disappoint his fans. City of the Living Dead carries on his tradition of memorable gore sequences (like the splinter in the eye in Zombie) with a scene I always remember from the days when I voraciously read Fangoria magazine. The sequence in question involves a young woman who quite literally "pukes her guts out" when she gazes into the eyes of the dead priest's spirit. The scene is very well done and is one of my favorites in the genre of Italian horror.

There are some particularly excellent effects in the scene mentioned above involving the girl's eyes tearing up with blood that proceeds to run down her cheeks. I don't know how they did it, but the effects are utterly amazing.

The rest of the special effects in the film are decently done as well. The zombie make-up is appropriately slimy and rotten and there are plenty of people's brains being ripped out the backs of their heads. Another famous gore scene in the film, though comes not from zombie violence on a human but from one human to another. The scene features a man drilling through another man's head with a large table drill and the effects in the scene are very convincing. Viewers may find themselves grasping at their own heads during this scene in empathetic pain.

City of the Living Dead was the first in a proposed trilogy called the Seven Gates Trilogy. The second film in the trilogy was considered one of Fulci's masterpieces, The Beyond. Both films feature a mysterious book (called Enoch in City and Eibon in Beyond) and begin with a death that serves as the catalyst for the opening of the gates. The Seven Gates Trilogy was never completed although the star of The Beyond, David Warbeck, had written a treatment for an actual sequel to The Beyond itself. Unfortunately he passed away and the project was halted.

Attentive viewers should keep on the lookout for two very high profile cameos from people involved in Italian horror cinema. The first comes from the master himself, Lucio Fulci, who appears as a police detective in the film. He has always been given to Hitchcock like cameos in all of his films, so that is definitely something to look out for. The second comes from another Italian horror film director, Michele Soavi. Saovi was a second unit director for Dario Argento before he started doing films of his own, including one of my favorites, Cemetery Man. Look for Soavi as the character Tommy.

Fulci fans Blackest Heart Media gave us a teaser of their upcoming The Gates of Hell graphic novel (in their wonderful Zombie graphic novel adaptation) with a short six page adaptation of the opening moments of the film. The Blackest Heart gang have a perfect way of expanding Fulci's original material while staying true to the filmmaker's original intentions and with this mini adaptation they set up their Saga of the Seven Gates project beautifully. Fans of Fulci's films should definitely check out this series of comics based on the gory world he created.

Anchor Bay Entertainment, masters of the cult film world themselves, have brought about yet another excellent DVD that helps preserve a milestone in the history of horror films. The City of the Living Dead DVD is presented in the aspect ratio of 1.85:1 and looks as immaculate as the day it was printed. I noticed no scratches on the source print and the audio was very clear. The film is shown uncut and uncensored for one of the first times on legitimate US home video. The sheer work that Anchor Bay puts into gathering these films and putting out serious releases of them shows the dedication they have to film and their wishes to make sure these classics are not forgotten.

The disc also contains a remastered audio track in 5.1 stereo, a theatrical trailer, a still gallery accompanied by radio spots, and an interesting bio on Fulci himself. If the chopped up unintelligible Gates of Hell is the only way you remember this great film, then I heartily suggest you seek out Anchor Bay's new uncut version of this film. It's the only way to see this film as intended, with a crystal clear picture and all of Fulci's patented gore intact.