Don't listen to all the hype from the fanatics. The basic story line of this cheap "no-budget" zombie flick (a budget of only $70,000) is shamelessly lifted from George Romero's highly superior Night of the Living Dead (1968) released a few years earlier. Romero can't possibly be flattered by CHILDREN SHOULDN'T PLAY WITH DEAD THINGS (1972). Even though the folks that exposed this strip of color celluloid in 1972 may have ripped the idea from Romero's black-and-white magnum opus, they certainly didn't do anything too flattering with it.

The movie follows a troupe of hammy hippie thespians as their director drags them off to a Florida island to act out a necromantic ritual. But even though they only pretend to raise the dead, the corpses in the island's cemetery don't realize it's only make-believe--the dead bodies crawl from their graves and start looking for human flesh to feed on. The acting troupe eventually gets trapped in an old house--this is a Romero rip-off, remember--as a swarm of pasty-faced zombies try to bust in and crash the party. 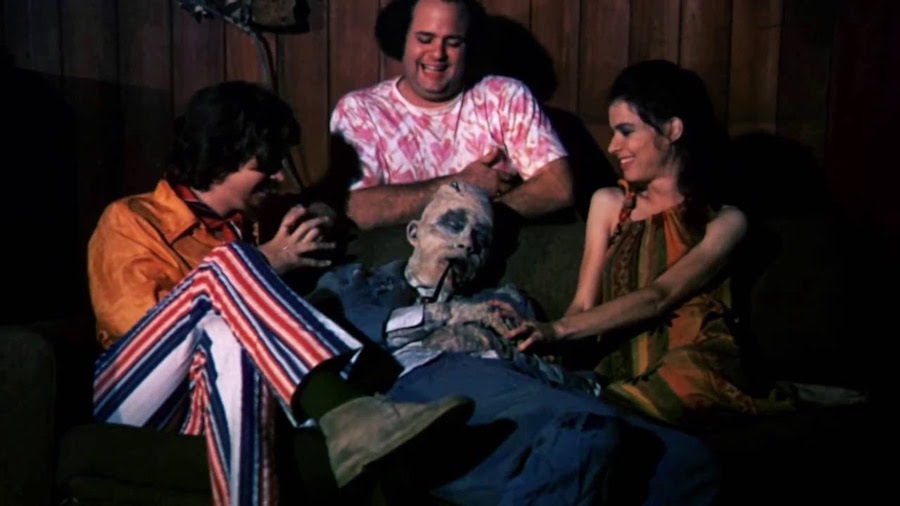 Aside from the stolen story ideas--which, by the way, are clumsily reworked--CHILDREN SHOULDN'T PLAY WITH DEAD THINGS is replete with abysmal acting, amateurish lighting, and even lousier cinematography. Many scenes that are meant to be frightening instead generate unintentional laughter simply because the actors are so inept and unconvincing. And often times it is hard to make out what is really happening on-screen because the lighting is too dark or the film improperly exposed.

That's not to say that the movie doesn't have a few good points. In spite of the low budget, some of the make-up jobs on the zombies are pretty cool. A few of the walking dead look hokey, but several of them look as if they stepped right off the pages of some old E.C. Comics. The sound design and sound FX are ably executed, too, providing a few genuine chills. And rotten writing and awful acting aside, the director does a pretty good job with what he has to work with. Most scenes are prudently tight, and the action is paced in a way that keeps things from getting too boring.