Seasoned adult movie director, Gerard Damiano (Deep Throat), documented conversations held with people directly involved in various areas of adult employment, cobbled together these interviews with some footage of peep shows and live performances, and released this home-made bit of cinema verite’ as Changes, complete with its own folksy theme song. Apparently Changes was Damiano’s pet project, a documentary used to bolster his favorable viewpoint towards pornography, which Gerard championed as a legitimate business providing men and women with a means to earn a living while providing harmless entertainment to consenting adults.

During the era that Changes was released, sex as an industry existed on the fringe of legality; those involved in live entertainment, making movies or publishing magazines for public consumption risked police harassment, fines and/or jail time for breaking the law. Individuals willing to take that legal risk rose to infamy founding everything from profitable magazines, adult theaters, bookstores, and film production studios.

Hardly a film for classroom social studies discussion, Changes instead molds itself on the concepts of a popular sub-genre known as “mondo movies;” movies serving curious theater patrons with documentary-style presentations purporting to showcase a series of real events collected from the far corners of the globe. Subjects featured in mondo movies targeted the dangerous, brutal, sexy, or extraordinary aspects of an array of cultures; topics deemed too outrageous to witness first-hand by a general public, who would, however, pay money to experience these thrills from the relative safety of their theater seat. Changes offers a look at a world many wouldn’t dare venture into alone; joining the raison d’etre of mondo-style entertainment, satisfying the prurient interests of curious audiences by showcasing what goes on behind the closed doors of many adults only venues populating the city of New York without that audience actually having to enter them.

In one of several candid interviews, Screw magazine publisher Al Goldstein talks with Damiano while carousing with his small staff of two in Goldstein’s office while they discuss their reasons for publishing, and personal perspectives on the preponderance of porn and its role as acceptable public media. Other interviewees include adult magazine shop owners discussing what’s currently popular with their customers, and a women’s rights activist sharing her views on pornography during an outdoor rally. Attention is also aimed at the burgeoning gay rights movement, where discussions with gay magazine editors and coverage of a gay rights gathering in a public park are documented. 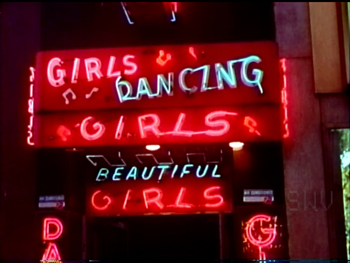 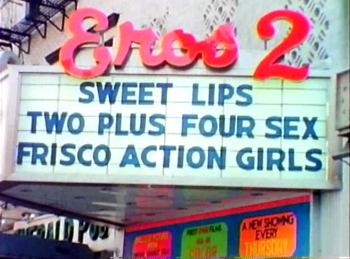 Men and women involved in making movies and/or participating in live stage performances discuss the “ins and outs” (doh!) of their business, one actor remarking that his job contains zero sexual appeal for him personally due to the fact that he’s crammed into a room full of people and equipment while following commands to perform like a thoroughbred. One live performer, asked about displaying herself for a room full of wide-eyed theater patrons, expresses her desire that audiences respectfully observe her graceful moves and appreciate the artistry involved in her act, not, in her own words, “just wanting to see somebody balled.” As images of a woman inserting a huge white dildo between her splayed legs dance on screen, the anonymous performer continues explaining that her approach to each of her live sex shows varies depending on audience behavior; a crowd of obnoxious viewers yelling rude comments causes her to mentally detach herself from her routine while silently berating the unruly crowd, “Fuck you, go on and look, get your goddamn jollies off. I wanna get through work, I have something else to do. I wish that music would hurry up and get through, I am so sick of standin’ up here.” That a performer offering live sex on a stage sandwiched along the adult thoroughfares of New York’s 42nd Street, an area littered with petty thieves, bums, whores and drug addicts, expects her audience to be anything less than belligerent, provides a sobering glimpse into the amount of disillusionment participants in the sex industry relied on in order to continue their tawdry forms of employment in the adult industry day after day after day.

Hand-held shots of marquee littered streets glimmering beneath a halo of multi-colored light provide a concise souvenir of this now-dead stretch of sin and sleaze once draped across New York’s 42nd Street corridor like an ill-fitting party dress. Historically, the scenes of storefronts and their gaudy racks proffering paraphernalia and x-rated magazines are invaluable glimpses into the hey-day of an adult industry prior to its current state of sanitized Vegas-style packaging, the end result of years of public relations acumen in the industry’s search to further legitimatize their billion-dollar kingdom, a candy land of porn once relegated to low-rent sections of cities everywhere.

Given this audience disparity, where no one requires any celluloid cajoling to accept the adult industry as a harmless form of entertainment, the final scene in Changes’ offers a mind-boggling scenario. Featured in medium close-up is a very young Gerard Damiano, Jr. reciting the story of Jesus’ crucifixion at Golgotha to his father while drawing with magic markers in the comfort of his bedroom. A scene that can be interpreted as a quirky denouement deflecting blame placed squarely on the shoulders of the porn industry by using junior’s innocent recital as a means of subliminally directing the Biblical passage, “Let those without sin……” into the audience; an audience consisting of a group of bored voyeurs slumped into their seats watching little Gerard’s performance and wondering, “What the fuck is this?”. Certainly not what Mr. Damiano intended.