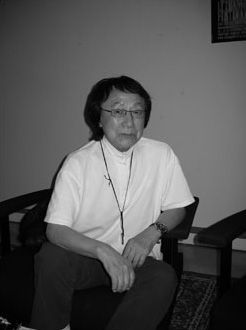 Teruo Ishii (石井輝男, Ishii Teruo?, January 1, 1924–August 12, 2005) was a Japanese film director best known in the West for his early films in the Super Giant series, and for his films in the Ero guro ("erotic-grotesque") subgenre of pinku eiga such as Shogun's Joys of Torture (1968). He also directed the 1965 film, Abashiri Prison, which helped to make Ken Takakura a major star in Japan.[1] Referred to in Japan as "The King of Cult", Ishii had a much more prolific and eclectic career than was generally known in the West during his lifetime.[2]

In 1968, Ishii initiated two popular, long-running series for Toei. In the first entry in the Hot Springs Geisha series (1968–1972), Ishii successfully replaced his usual "darkly sardonic cinematic style in favor of this light and frivolous 'mainstream' comedy about geisha masseuses operating inside a hotsprings resort."[6] Ishii left this series to other directors. The Joys of Torture series (1968–1973), however, suited Ishii's taste. Beginning with Shogun's Joys of Torture (1968), Ishii directed all eight entries in the series, which examined the history of torture in Japan.[7] A fan of the work of horror and suspense author Edogawa Rampo since childhood, Ishii adapted many of his horror stories into his films of this period, including Horrors of Malformed Men.[3] The term ero-guro ("erotic-grotesque"), used to describe Rampo's writings, was also applied to Ishii's style in these films, and the term is still used to describe the most extreme of the S&M films in Japan. Of these, the Weissers comment, "The Ishii Torture movies are still the best-made, rivaled only by certain Koji Wakamatsu productions (especially Torture Chronicles: 100 Years (1975)), a few from Masaru Konuma {i.e., Wife to be Sacrificed and Flower and Snake (both 1974)) and Go Ijuin's Captured For Sex 2 (1986)."[8]

Ishii worked in several of Toei's popular genres during the 1970s, including a Pinky violent film with Reiko Ike, Female Yakuza Tale: Inquisition and Torture (1973),[9] and one of Sonny Chiba's Street Fighter films in the mid-1970s, The Streetfighter’s Last Revenge (Gyakushu! Satsujin Ken).[10] Ishii made two contributions to the biker genre with Detonation! Violent Riders (1975) and Detonation! Violent Games (1976).[11] After 1979 Ishii stopped making theatrical films and worked mainly for television during the 1980s.