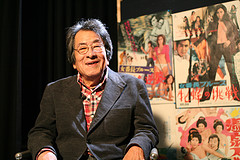 Noribumi Suzuki also known as Norifumi Suzuki, is a Japanese film director and screenwriter. He is best known for his works for studio Toei, especially the Red Peony Gambler and Torakku Yarō series.

Suzuki was born November 26, 1933 in Shizuoka. He dropped out of Ritsumeikan University's Department of Economics, and subsequently joined Toei's Kyoto Studio as an assistant director in 1956, learning his craft under Masahiro Makino, Tai Kato and Tomu Uchida. He made his screenwriting debut on director Kōkichi Uchide's 1963 film Zoku: Tenamonya Sandogasa (co-written with Takaharu Sawada), and his directorial debut in 1965 with Osaka Dokonjō Monogatari: Doerai Yatsu starring Makoto Fujita.

At the 1985 Yokohama Film Festival, he was awarded a special prize for his career.[1]