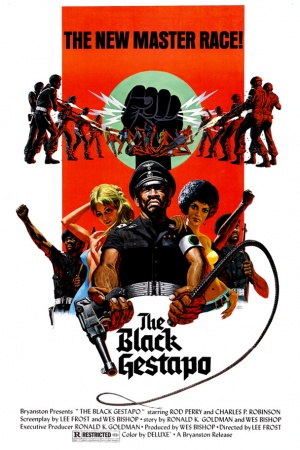 Lee Frost (b. David Kayne, August 14, 1935 - May 25, 2007, Globe, AZ) was a screenwriter and director of classic exploitation films. Some of his work includes: The Thing With Two Heads, Policewomen, The Black Gestapo and Race With The Devil.

Frost grew up in Glendale, California, and Oahu, Hawaii. He later moved to Hollywood, where he started his career making TV commercials for the studio Telepics. He made debut with the early 1960s nudie cutie Surftide 77 (1962). He followed with takes on several different genre films including horror comedy House on Bare Mountain (1962), mondo shock documentaries Hollywood's World of Flesh (1963), Mondo Bizarro (1966), Mondo Freudo (1966)), roughies The Defilers (1965), The Animal (1968)), crime drama (The Pick-Up (1968)), westerns (Hot Spur (1968), The Scavengers (1969)) and even Nazisploitation Love Camp 7 (1969), which has been widely cited as the prototype for the notorious Ilsa: She Wolf of The S.S. (1975)). A majority of Frost's 1960s features were made for producer Bob Cresse. Moreover, Lee added sex inserts into such foreign films as London in the Raw (1965), Night Women (1964) and Witchcraft 70 (1970). Frost often cast former football player Phil Hoover in his 1970s movies and frequently collaborated with producer/screenwriter Wes Bishop (in addition to their own pictures, Frost and Bishop wrote the script for Jack Starrett's terrific Race With The Devil (1975), which Frost was originally supposed to direct as well). Both Frost and Bishop often appear as actors, usually in small parts, in Frost's films. Lee worked as an editor on industrial movies for a film laboratory throughout the 1980s and early 1990s. His last feature was the straight-to-video Shannon Whirry erotic thriller Private Obsession (1995).