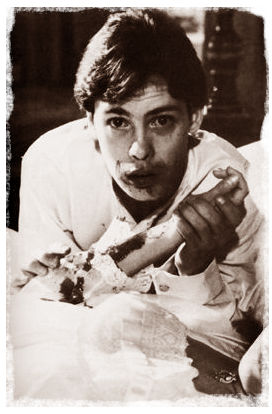 John Amplas was born on June 23, 1949 in Pittsburgh, Pennsylvania. Amplas was outstanding as a troubled and disturbed teenager who thinks he's a vampire in George Romero's fantastic horror winner Martin. John has appeared in several other pictures for Romero: he's a Hispanic gang leader in the immortal Dawn Of The Dead (Amplas was also the casting director for this film), a biker in the quirky Knightriders, a lethal shambling zombie in the immensely enjoyable anthology outing Creepshow and a nerdy scientist in the grim Day Of The Dead. Amplas was miscast, but still solid as an FBI agent in Bloodeaters and was chilling as a vicious backwoods Satanist in Midnight. He gave a fine performance as a weary single blue collar guy in the poignant No Pets.

More recently John played an evil, greedy priest in the offbeat "Daddy Cool." Outside of his regrettably sparse film work, Amplas has had a long and distinguished stage career as both an actor and director. He's a founding member and the Associate Artistic Director of the Pittsburgh Playhouse Repertory Company. John received a lot of accolades for his portrayal of Ricky Roma in an Axiom Theater stage production of David Mamet's "Glengarry Glen Ross." Other plays he's acted in are "American Buffalo," "The Lion in the Winter," "Breaker Morant," "On the Beach," "Colonel Bird," and "Morat/Sade." Among the plays Amplas has directed are "Hair," "Driving Miss Daisy," "The Threepenny Opera," "Quills," "The Prince," "Suburbia," and "Who's Afraid of Virginia Woolf?". Moreover, John Amplas teaches acting as an Associate Professor with the Conservatory of Performing Arts at Point Park University.