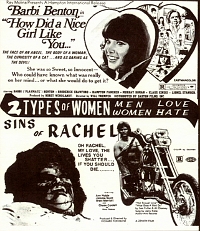 AKA Pot, Parents, and Police

Hampton International, which existed through 1973 to around 1975, is the best known of three short lived companies led by Robert Saxton, from Golden Eagle International and Roy Molina, formed after the brief start of TWI National and Robert Saxton Films with most of their catalogs successfully being brought over. Starting in Early 1973, the company would wind up with a small selection of films which resulted in a couple of Cult Movie favorites - The Sins of Rachel and The Cat Ate The Parakeet, the later a bid to hop on the very short lived but then-happening Family Film with a Message trend. The only two films that would pass through the three company names would be Naked Evil, a 1966 film Produced by Richard Gordon that would have trouble finding proper distribution from Columbia until Saxton's company picked it up around 1972 and The Naughty Cheerleaders, the Made in Germany film originally released in 1970 featuring the debut of Barbi Benton, while oddly enough, Molina's own 1972 production Voodoo Heartbeat, Directed by Charles Nizet, and the counter-culture flick Captain Milkshake would rarely get a chance through the years after their plays through TWI.

Saxton's experience with Imported films with Golden Eagle helped out in 1973 as Saxton released The Island of Lost Girls, a Kommissar X film from Germany that had an English dub supervised by Molina, while a reported Kommissar X Meets the Lavender Posse was picked up as well. Using a title from the TWI catalog, Naked Evil was thrown together with a pick-up of The Gorilla Gang, one of the Edgar Wallace films made by Rialto film, for a Double Bill for 1973. In the tradition of re-naming films common to Exploitation, The Naughty Cheerleaders was transformed into What's a Nice Girl Like You Doing in a Business Like This?, using Benton's name value in the ads. Continuing with Imported Action films, Saxton also picked up Winnetou and the Half Breed, which was one of the Karl May Westerns - this one being a West Germany/Italy/Yugoslavia Co-Production.

With the Saxton Film catalog imported over to Hampton International by Late 1973, the West Germany/Italy Co-Production The Blond Connection was picked up with Fabio Testi and Anita Ekberg being familiar names. By Late 1973, Phillip Pine's 1972 film Pot, Parents, and Police was picked up under the title of The Cat Ate the Parakeet, a Drugsploitation film that featured the acting of Johnny Legend who was performing under the name of Martin Margulies, although despite the timely topic, it was not a major success. In 1974, Hampton picked up the 1972 film Sins of Rachel from R. A. Enterprises, a Murder Mystery with a Gay-oriented theme within that has an interesting history of being written by Ann Noble from The Corpse Grinders and Directed by Richard Fontaine, known in the past for "Physique Films" since the Late 50's trying to branch into more mainstream fare with Rachel being the only result of his plans to be released.

The final film associated with Hampton International according to most reports is Alfred Vohrer's Hard Women, released in The States in 1975.

For a company with very few films, it is to note that Sam Sherman of Independent International bought some films from them after the company's collapse, just like what he did for Cinemation around the same time. Of note was the pick up of The Gorilla Gang and Hard Women noted for their 1975 re-releases. Later, Naked Evil was picked up and had scenes added in places while tinting was also used for its 1979 Exorcism At Midnight re-release in the same style as Horror of the Blood Monsters for a few moments. Naked Evil was released on DVD through Image Entertainment with both versions on the disc and a commentary by Sherman.

Films Released by Something Weird Video

The legendary video company has released Pot, Parents, and Police and Sins of Rachel, with the later being released on DVD with Bob Clark's She Man while The Cat Ate the Parakeet is now in it's DVD-R line.