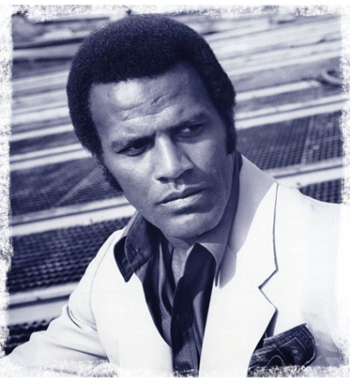 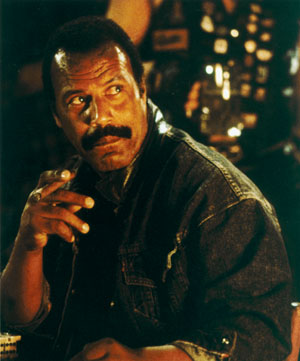 Fred "The Hammer" Williamson (born March 5, 1938) is an American actor, architect, and former professional American football defensive back who played mainly in the American Football League during the 1960s.

After playing college football for Northwestern in the late 1950s, he was drafted by the San Francisco 49ers #2 overall. When during training camp he was switched to their defense, his attitude over the switch prompted him to hit his assignment too hard, the 49ers coach asked him to quit "hammering" his players. The nickname "The Hammer" stuck with him ever since. He played a year for the Pittsburgh Steelers in the National Football League in 1960. He then switched to the new American Football League. Williamson played four seasons for the AFL’s Oakland Raiders, making the AFL All-Star team in 1961, 1962, and 1963. He also played three seasons for the AFL’s Kansas City Chiefs.

Following his retirement from football, Williamson decided that a career in architecture wasn't his calling and tried his hand as an actor, much in the mold of star running back Jim Brown. He also acted alongside Mr. Brown in films such as 1974's Three The Hard Way, 1975's Take a Hard Ride, 1982's One Down, Two To Go, 1996's Original Gangstas and 2002's On the Edge, along with guest starring with him in a handful of episodes of various television programs. Before Jim Brown did it in 1974, Fred posed nude for Playgirl magazine in the October 1973 issue. One of Williamson’s early television roles was a part in The Cloud Minders, a 1968 episode of Star Trek, playing "Anka". Williamson also played Diahann Carroll’s love interest in the sitcom Julia. In an interview for the DVD of Bronx Warriors, Williamson stated that the role in Julia was created for him when he convinced the producers that the Black community was upset that Julia had a different boyfriend every week.

Williamson's early film work included roles in 1970, M*A*S*H and Tell Me That You Love Me, Junie Moon. He also got to play, in 1973, an African-American mafioso in Black Caesar and its subsequent sequel, Hell Up In Harlem. He is also noted for portraying "Boss Nigger" in the 1975 blockbuster hit, Boss Nigger. After this he appeared as an actor in several films, most of which are considered to be of the "blaxploitation" genre. In 1974 he starred alongside Peter Boyle and Eli Wallach in the movie Crazy Joe.

In 1974, he was selected by the ABC television network as a commentator on Monday Night Football to replace Don Meredith, who had left (temporarily, as it turned out) to pursue an acting and broadcasting career at rival network NBC. Williamson was used on a few pre-season broadcasts, but he was judged to be unsuitable by ABC. He was relieved of his duties at the beginning of the regular season, becoming the first MNF personality not to endure for an entire season. He was replaced by the fellow former player (and fellow Gary, Indiana, native) Alex Karras.

Since that time, Williamson has continued his career as an actor and director, recently appearing in the feature film version of the 1970s television series Starsky and Hutch.

During the mid-to-late 1980s and early 1990s, Williamson frequently appeared on television as a spokesman for King Cobra (“Don’t let the smooth taste fool you.”)...as did fellow actor/martial artist Martin Kove. In 1994, Williamson, along with many other black actors from the 'Blaxploitation' movie era (namely Antonio Fargas, Pam Grier, Rudy Ray Moore, and Ron O'Neal) made a cameo appearance on Snoop Doggy Dogg's music video "Doggy Dogg World", where he appears as himself using his pro-football nickname "The Hammer".

Williamson co-starred with George Clooney and Quentin Tarantino in 1996's From Dusk Till Dawn, directed by Robert Rodriguez. He was in the cast of 1978's original The Inglorious Bastards, which inspired Tarantino's 2009 film of a similar name.

Williamson made a cameo appearance in the independent comedy feature Spaced Out which was released by Ariztical Entertainment in 2009. When asked about his role in the film at the premiere screening in 2006, Williamson said: “I don't really know what the character was. I don't even know what I did...why I did it, where I did it. I just know that I did it.[2] ”

Career as Director and Producer

Alongside acting, Williamson has since the middle 1970s appeared as a director and producer as well. His first film as a producer was Boss Nigger (1975), a Western directed by Jack Arnold. With the second film he produced he also debuted as a director, Mean Johnny Barrows (1976), was a significant predecessor of the Rambo films with its violent Vietnam vet story, however the novel First Blood (Rambo I) was written in 1972. He has since directed over 20 features.

In the middle of the 1970s, Williamson relocated to Rome, Italy and formed his own company Po' Boy Productions, which started to produce actioners like Adios Amigo (1976) and Death Journey (1976), both of which starred and were directed by Williamson. Although his most recent efforts as director and producer have mainly gone straight to DVD, Williamson has continued working actively with films.

The following 29 pages are in this category, out of 29 total.