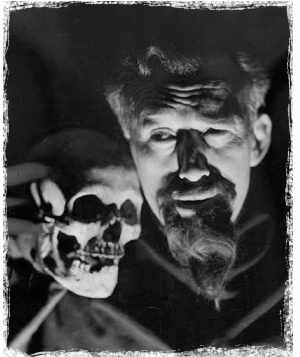 Ernest "Ernie" Earle Anderson (November 12, 1923 – February 6, 1997) was an American disc jockey, and television and radio announcer/voiceover artist. He is best known for his portrayal of Ghoulardi, a host of a late night horror movie presentation, and for his longtime role as the main voice of the American Broadcasting Company.

Born in Lynn, Massachusetts, Anderson planned to go to law school but was instead drafted into World War II. After the war, Anderson became a disc jockey at WSKI in Montpelier, VT.[1] Anderson worked as a disc jockey in Albany, NY and Providence, RI before moving to Cleveland [2] to join WHK. After WHK switched to a Top 40 format in late 1958, Anderson was let go as his persona didn't fit with the format's newer, high-energy presentation. From there, he went to NBC affiliate KYW-TV (now WKYC), where he first collaborated with Tim Conway for some on-air work.

From 1963 to 1966, Anderson presented the program under the alter ego of Ghoulardi, a hipster that defied the common perception of a horror host. While this version of Shock Theater also featured grade "B" science fiction and horror movies, Ghoulardi openly mocked and berated said films, and spoke in an accent-laden beatnik slang. Often, comedic sound effects or music would be inserted in place of the movie's audio track. Occasionally, Ghoulardi would even insert himself into a film and appear to run from the monster, using a chroma key system that WJW normally utilized for art cards. He loved firecrackers (which at the time were against the law in Ohio) and started by blowing up apples and leftovers and graduated to blowing up model cars, statues and items sent in by viewers.

Anderson's "Ghoulardi" persona often lampooned 'unhip' targets, the most famous having been Dorothy Fuldheim. The first woman to anchor a TV news show in America, and a life-long staffer for the city's ABC affiliate, WEWS, Fuldheim openly expressed a dislike for Anderson, feeling that the youth of Ohio were under attack with his pot jokes and childish antics, which she found distasteful. Ghoulardi responded by mocking her every week, usually referring to her as "Dorothy Baby." Their mutual on-air jibes created what viewers considered a battle of 'the beatnik and the empress of Ohio news.'

By 1965, Anderson not only hosted Shock Theater but also the Saturday afternoon Masterpiece Theater and the weekday children's program Laurel, Ghoulardi and Hardy, all of which were ratings successes. Anderson also created the "Ghoulardi All-Stars" sports teams, which would often attract thousands of fans to as many as 100 charity contests a year. With some help from Conway, Anderson even went to Hollywood to shoot a TV pilot, and featured the audition and films of his trip on his show, highly unusual for local TV in 1966.

After finding limited success in front of the camera, Anderson moved behind the microphone when Fred Silverman made Anderson the voice of the American Broadcasting Company. Anderson's voice is likely best remembered for his newscast introductions for various ABC stations across the country: "Eyewitness News...starts...NOW!" (WEWS would be one of these affiliates, utilizing Anderson's voice throughout the 1980s.) Anderson's signature was putting emphasis on a particular word. One example was his enunciation of "Love" in "The Love Boat." Another would be "The Man... The Machine... Street Hawk!" from the 1985 motorcycle action series. His voice was also heard in the ABC bumpers as he was saying "This is... ABC!" Anderson was also the announcer of America's Funniest Home Videos from 1989 to 1995 and did the voice over for the previews of new episodes during the first three seasons of Star Trek: The Next Generation until he was replaced by Don LaFontaine.

Ernie did the voice over for the very first PowerPuff Girls episode entitled 'Meat Fuzzy Lumpkins' for the WanerBros/Hanna Barbera Cartoon Network in 1995. He reprised the role for 'Crime 101', the second PowerPuff Girls episode produced, the next year. Tom Kenny was his replacement once the actual series started production two years later.

Anderson died of cancer in Los Angeles on February 6, 1997.[3] His son, director Paul Thomas Anderson dedicated his 1997 film Boogie Nights to his memory. In addition, The Drew Carey Show episode "See Drew Run" was dedicated to his memory. His death was also mentioned on an episode of America's Funniest Home Videos that same year.