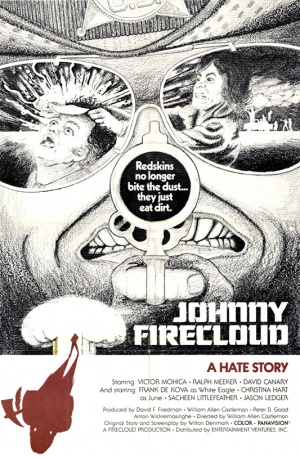 "The Mighty Monarch of the Exploitation World!!" was the rightful title of this Los Angeles-based company "Located on the old film row," owned by the one and only David F. Friedman. Formed by Friedman and friend Dan Sonney, it was like an update of the legendary Sonney Amusements, with 1966's A Smell of Honey, A Swallow of Brine being the last title connected to it. Friedman's power in distribution, thanks to the success of The Notorious Daughter of Fanny Hill (1966), was the attraction for a few film makers with unfinished projects to carry them to the company for them to be finished, resulting in some films that would provided suitable screen filler while Friedman's own productions would make Exploitation history including films that would be Produced with the FPS name in 1968 (The Head Mistress, Brand of Shame) and, after 1968's Space Thing, bigger successes like Starlet! (1969), Trader Hornee (1970), and The Erotic Adventures of Zorro (1972). EVI would have a surprise Action Adventure hit with 1975's Johnny Firecloud, a film that would be distributed in some countries through 20th Century Fox, before making its final films in the Adult Film scene through the Late 70's and Early 80's.

As a filmography would only be a repeat of anything related to David F. Friedman, it would be good to just visit the page about the films of the Mighty Monarch on this Grindhouse Database page.

Since The 90's, the company's history up to and including Johnny Firecloud is presented through Something Weird Video while their last films are carried through VCA.