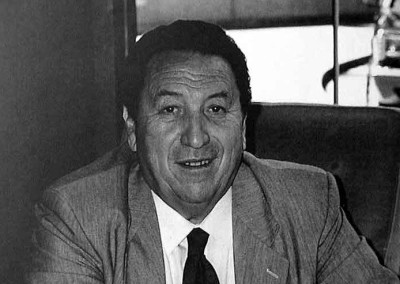 Antonio Margheriti (September 19, 1930 – November 4, 2002), aka Anthony M. Dawson, was born in Rome, Italy. During his career, Margheriti was a cinema explorer. He worked in several subgenres in horror and sci fi. From giallo/occult films to gothic horror, gore, cannibal films and others. Very little has been written on Margheriti's work because he did not specialize in one or two subgenres of horror he is seen to be somewhat lacking commitment, hence specialisation, which has led to the mistaken belief that Margheriti is artisan of all but artist of none. This opinion both fails to address his unique position as arguably the only director to make delirious and imaginative films in many subgenres and also highlights the habit of subjugating him to inevitable comparisons with those directors considered the expert in those particular subgenres. Such auteur isomorphism does not sit well for fans of Margheriti.

Margheriti was, first and foremost, a working director. Like Lucio Fulci, his artistry could be said to be accidental rather than volitional. But low budgets and lack of freedom with project choices could not quell his cinematic talent. Margheriti began his career in the 1950s, jobbing for the studio Titanus, where he became interested in special effects and supernatural themes. His first major projects were Co-director of Legs of Gold (with Turi Vasile [1958]) and as special effects director on The Day the Earth Shook (1959). His early interest in special effects led to his first feature Space Men (1960) and a love affair with science fiction. Later, Margheriti resumed his special effects career, creating them for Sergio Leone (A Fistful of Dynamite, 1971) and Aldo Lado (The Humanoid,1979).

Margheriti's science fiction films established and affirmed the two trajectories upon which his style travelled for the duration of his career ­ bizarre plots and lush, ripe visuals. Rather than confusing the viewer, his visuals launch them into a heterotopia outside of traditional cinematic referents of identification, logic and images whose intensities of colour, composition and contrasts are balanced rather than saturated. In these films Margheriti also introduces the perverse hero, redeemed because of rather than in spite of his or her perverse nature in a world where normalcy is often brutal, inelegant and unimaginative. Most of Margheriti's early sci-fi plots resonate around the themes of wandering asteroids, aliens sending wandering asteroids or wandering rockets, and rockets which manage to wander on their own.

Margheriti returned briefly to the sci-fi genre later in his career, albeit in hybrid formats. Yor, The Hunter From The Future (1983) combined sci-fi with peplum, a genre Margheriti flirted with in Hercules, Prisoner of Evil (1964), Devil of the Desert (1964) and Mr. Hercules Against Karate (1973). Like the heroes plagued by perverse desires in the sci-fis, the peplum heroes of Hercules and Devil of the Desert are more interested in sex and drugs than fated heroism, and seem unperturbed by their human fallibility. The flawed hero reaches its zenith as evil savage in Yor. The two early films remain within the saturated, strange worlds of Margheriti's sci-fis, while Yor evokes the gritty yet viscous modern world Margheriti later created for his modern horrors. Another sci-fi hybrid Margheriti made was Treasure Island in Outer Space (1987). While much of the lushness of the sci-fis has gone from this sci-fi world, the introduction of one of Margheriti's other specialties ­ high gore ­ assures the viewer is confronted with the strange and the macabre. Margheriti's gore is not the everyday gore of wounds and gashes, but gouged eyeballs and suppurating flesh, and all this in a remake of a children's story set in outer space which pre-dates Disney's insipid 2002 version by fifteen years.

A selection of other genres with which Margheriti flirted include the giallo (The Young, The Evil and the Savage, 1968, pre-dating Dario Argento's first giallo); soft-porn (1001 Nights of Pleasure, 1972); the western (And God Said to Cain, 1969, and Take a Hard Ride, 1975, among others); the disaster movie (Tornado,1983); war (The Last Hunter, 1980, scripted by Dardano Sacchetti and starring David Warbeck); crime (among others, The Squeeze, 1978, with Lee Van Cleef); even 007 figlia (Bob Fleming Mission Casablanca, 1966, scripted by Ernesto Gastaldi);and perhaps unsurprisingly for a director starting his career at the height of the Italian invented mondo genre, a mondo film (Go! Go! Go! World, 1964). Here is what I mean when I say Margheriti was a working director, who, unlike Mario Bava and Argento but like Fulci and the above mentioned enormously important and talented scriptwriters Dardano Sacchetti (The Beyond, Margheriti's own Cannibal Apocalypse, Demons, The Church and Bay of Blood) and Ernesto Gastaldi (The Whip and the Body for Bava, The Horrible Dr Hichcock [sic] for Freda, Torso for Sergio Martino and Margheriti's The Virgin of Nuremberg), had little control over budget or production but had to work with what he was given. This is another reason why the majority of this article will focus unapologetically on the horror films because it is here, like Fulci, Sacchetti and Gastaldi, that Margheriti both created and elaborated in the influential genre of Italian horror.