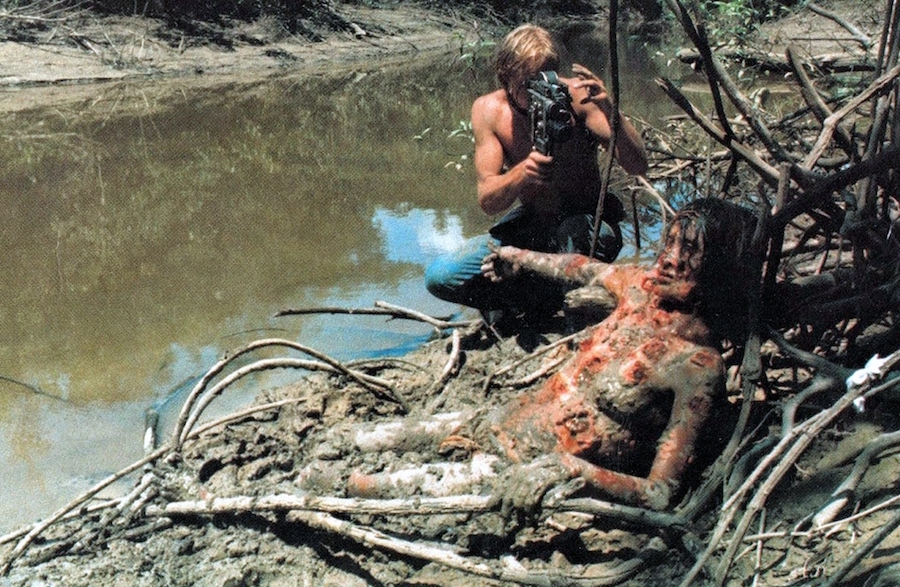 Tell me if this story sounds familiar? Four documentarians venture into the wilds of South America to film ancient tribes of cannibals as they go about their hedonistic activities. The film crew disappears and two months later their footage is found and the truth about what evil has befallen them is revealed. Now, if you said that it sounds like The Blair Witch Project then you would be correct. Only this is Cannibal Holocaust and it came out twenty years before Daniel Myrick and Eduardo S·nchez had even learned how to hold a camera.

The story of Cannibal Holocaust is told slightly more cinematically, with Professor Monroe (Robert Kerman) leading his own crew into the jungles to find out where the previous crew has gone. In his journeys he is witness to many of the inhumanities that the cannibals inflict on others and even their own. Some harrowing scenes including the real killing of a giant turtle (for the use of food, but still incredibly hard to watch) and several scenes of torture visited upon tribe members that have broken various laws are on display. He is appalled by the savagery he sees displayed by the natives, but has no idea what is in store for him.

Professor Monroe locates the footage, and thinks he has found the remains of the film crew, but he is not sure until he begins viewing the footage. While on a lecture tour detailing his journey, some TV stations express interest in airing the lost footage. Shocked by what he has already seen, Monroe must convince the network heads that the footage is too graphic to be televised (this was before cable TV, after all). In the end, he makes his point and then some.

As Monroe and the network staff watch the footage, they soon learn who the true barbarians are. They watch in horror as the documentary film crew round up an entire tribe in a hut and set the hut on fire, forcing anyone who tries to run out back inside. They see they men in the crew rape a helpless native woman who is later killed by her tribe because she is no longer pure. The crew also captures on film an impromptu abortion and subsequent killing of an unborn child and its mother. It's not pleasant viewing material.

The final horror comes when Monroe learns the true fate of the crew. In retaliation for the rape of one of their tribeswomen, the cannibals hunt down the crew members and, one by one, all four of them are horribly murdered and eaten in front of the still running camera lens. As an added insult they also rape the only female of the group, Faye Daniels (Francesca Ciardi), before they eat her. The film is immediately ordered destroyed.

Cannibal Holocaust is by no means a film for anyone with a weak stomach. Although Blair Witch follows the "lost footage" almost scene for scene (including the now famous "last shot taken from the viewpoint of a fallen camera"), there is no mistaking that Holocaust's footage is the more graphic of the two. This is an extreme warning: Cannibal Holocaust is not for children or the squeamish!

The movie is starkly filmed and the bleakness of the footage adds to the realistic nature of the story. Although the footage with any actual humans being killed is faked, any scene in which an animal is killed is done for real. I'm not sure if this was done in order to make anyone watching it think that the human deaths were real as well, but they're there and it's hard stuff to watch. The parallels that Clerici's script draws between us and the cannibals is also very effective in conveying just how close we are to our primal natures and who the true savages really are.

Another effective aspect of the film is the score by Riz Ortolani. At times haunting and other times beautiful, Ortolani's score is perfect for the tone of the film. During the sequence where the film crew burns the tribe in the hut, the score takes on an tone that's almost that of a sweeping romance. The effect is incredibly disturbing.

A laserdisc was released by Cult Videos in 1997, featuring an interview with director Deodato containing a photograph from an uncompleted "piranha" scene, the original theatrical trailer, an isolated score on the analog track, and a mini poster. The laserdisc (which was viewed for this review) presents the film in its uncut version at a 1:85.1 aspect ratio and was shot and dubbed mostly in English like many other Italian films. Adventurous movie-goers may want to give this film a try, but I suggest all others stay away.

Reviewed by Pockets of Sanity