In 1968, audiences were treated to an unconventional comedy about a naive sexy girl who walks the earth to help everybody who needs help. Based on a satirical novel by Terry Southern, the movie follows the innocent Candy, who stumbles from one situation into another, and meets one kooky character after another. This results in a episode-structured and quite enjoyable piece of work, full of exaggeration and humor. It's sort of "Alice in Wonderland" for grown-ups. Every male character she meets along the way, like the poet, the doctor, or the fake guru, want to get in her pants. There is some brief nudity and various sex scenes, but they are very tame. Don't forget, this is a 1968 movie released into mainstream. Back then, that was enough to give the movie an R-rating. 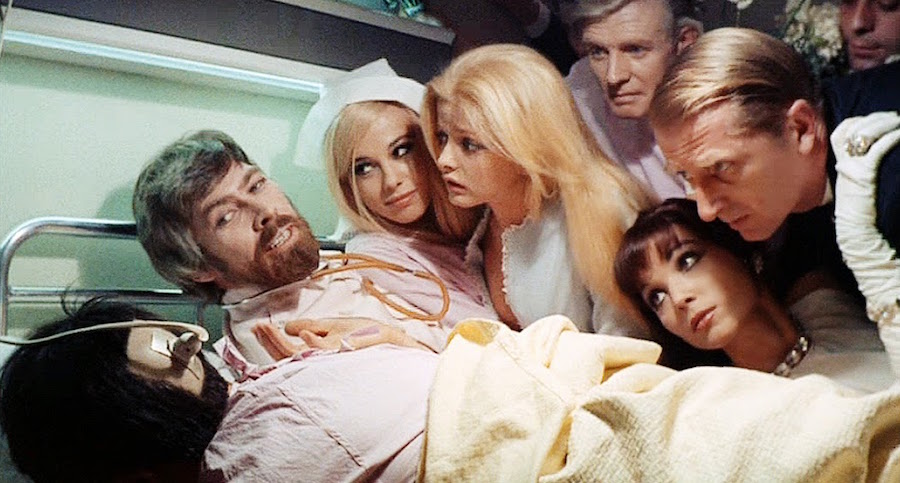 You wouldn't believe who they got to star in this: Marlon Brando, Walter Matthau, Richard Burton, James Coburn...and a Ex-Beatles member makes a cameo too. While watching Candy, it's best to stop trying to make sense of all it. Excluding children, people tend to dissect and over-analyze things in movies. I found it best just to "let it flow" and have a good time with it. Some people might argue that this movie is best viewed while being high on drugs. It's sort of a Hippy movie, after all. But I cannot rule out the possibility that the makers of Candy wanted people to think harder about it. Are they making fun of militarism and eastern Religion? If you want to, you can easily interpret stuff into Candy, like symbolism and critiques on society, instead of just viewing it as a comedy. I found the latter to be the more fulfilling experience. Then again, I cannot relate to Hippie culture and wasn't even born when the movie came out.

If you can't take the offbeat nature of Candy, skip a chapter or two, and watch the visually beautiful long take at the end of the movie. It should impress even film scholars. I found it to be a worthwile, funny expierience. The alternative nature of the movie feels relieving to me. There's never gonna be another movie like Candy, that's for sure.