In 1975, after directing the classic proto-slasher film Black Christmas, Bob Clark made this action-revenge film.

While witnessing a beating of a business owner in his neighborhood, ex-Marine Michael McBain (Bo Svenson) stops two hitmen from killing the man. With the counsel of Lt. Frank Sirriani (Robert Culp) McBain then decides to identify and testify against the two men who he soon finds out belong to a larger organization that was responsible for the attempted hit. Pretty soon McBain's own family is targeted and he must do whatever he can to protect them. The crime syndicate is headed by feared mobster Vincent Karbone (Battlestar Galactica's John Colicos) who wants McBain out of the picture before he can go through with the testimony in court. Karbone's main plan is to get rid of all the businesses in the general Philadelphia area so he can build a new planned self sustained district called Confluence City. Before the mob can kill McBain, his stepson and family, the police decide to place him in the witness protection program and move him up to Toronto, Canada. 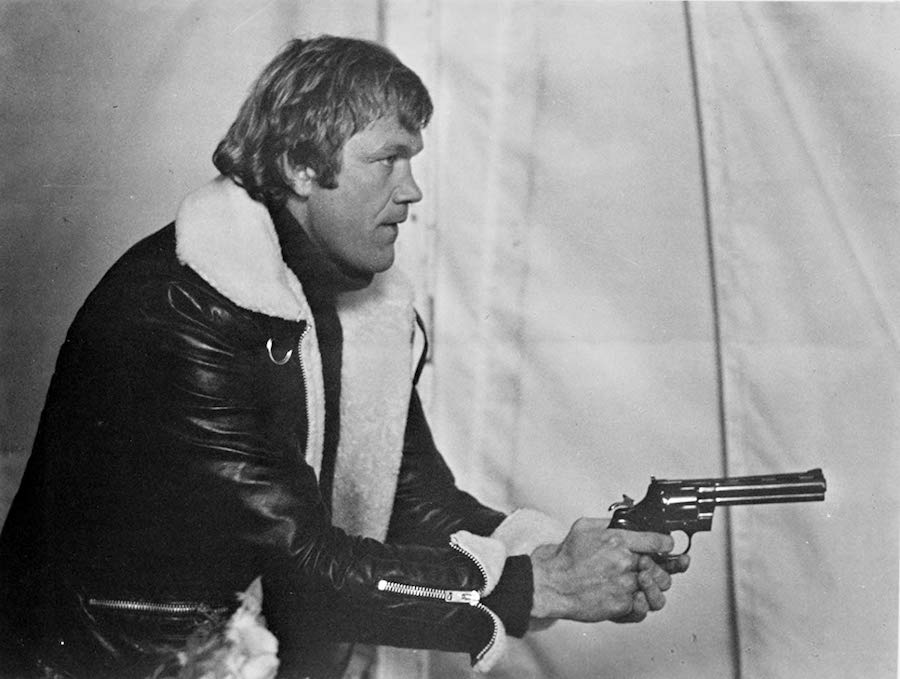 The family is first set up in a halfway house which is run by Mr. Redpoth (Jonathan White). Redpoth informs McBain that they will be altering the look of the family, changing their hair styles and general appearances for safety. What doesn't help is when the police discuss this secret information at a restaraunt back in Philly while one of Karbone's hitmen sits right next to them and listens to their plans as they discuss it with McBain's stepson's real father (who doesnt know where McBain is staying yet). The reveal of the family's new disguises is actually pretty comical. They all have terrible looking wigs, McBain grows a beard and wears glasses. They look like a bunch of goofs. When the family arrive at their new house in Toronto, McBain states that he thinks it "looks like The Addams Family lived there".

After his sister's fiancee is murdered by Karbone to get him out in the open again, McBain decides to go after Karbone himself instead of hiding out and waiting for the ball to drop. Once McBain begins exacting his revenge, the fun really picks up and theres some great action sequences including a car chase and a shootout in a factory. This is where Svenson's "Walking Tall" chops come into play and he takes out all the hitmen in a variety of brutally violent ways. He's unstoppable.

Overall, Breaking Point isn't a spectacular crime film, it's pretty much "by the numbers" plotwise, but it's worth a watch if you're a fan of the late Bob Clark and Bo Svenson's work.