Finnish director Renny Harlin (Lauri Harjola) helmed some high profile action movies in the 90s, such as Cliffhanger and The Long Kiss Goodnight, but his first film remains his best. Born American, or Jäätävä Polte as it’s known in Finland, was an action movie made by the Finns for the Americans. It was Harlin and producer Markus Selin’s risk attemp to break into US markets. 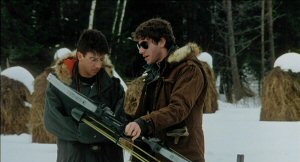 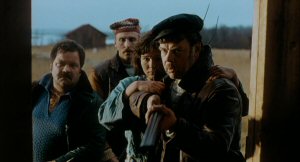 It’s important to understand where and when exactly the film was made. In the middle of the cold war in 1985, when Born American was shot, Finland had one foreign policy guideline above others; don’t piss off the eastern neighbour. A small country of 5 million people could not afford to anger The Soviet Union, not when they’re located right next to it. And then come gentlemen Harlin and Selin who want to do an action movie where innocent Americans have to fight for their lives against the ultimate evil that is The Soviet Union.

It was obvious that the director / producer duo was asking for trouble. I case of Harlin the risk paid off; a few years later he got job offers to direct the US horror movies Prison and Nightmare on Elm Street 4 (both in 1988), followed by Die Hard 2 in 1990. Selin was not as lucky. His Hollywood career did not catch fire and he had to return to Finland. Although today he is the most succesfull Finnish producer, Born American was a financial disaster for him.

The movie was completed and ready to be released in 1985 but, hardly surprisingly, it did not please the Finnish censors. The film was banned due to it’s violence and negative effect on foreign policy. For more than two decades it was believed that the Finnish censors did the decision out of their own free will (as they officially stated). Only recently it was revealed that the request for banning came directly from the Russian ambassador Vladimir Sobolevin.

Complains followed, and the movie entered the film ratings board a few more times until it was finally passed in late 1986, but only with heavy cuts. It was not a success in Finland, and Selin, who had invested a lot of money into the film and only owned the Finnish distribution rights, suffered the most. The banning did give the foreign sales a boost, but for the Finnish producers, who had been planning the biggest native advertising campaign so far, it did little good. While the movie has later found its fans, it’s still often overlooked and even sometimes considered a despicable b-movie by major Finnish audiences.

Harlin shot his film in English with an American lead cast (David Coburn, Steve Durham and Mike ’Chuck’s son’ Norris). The storyline is about three American students who come vacationing in Finland. While traveling in the eastern parts of the country they get a sudden idea; to cross the Soviet Union border. What begins as a harmless joke turns into a nightmare when armed soldiers find their footsteps in the snow and start chasing them. 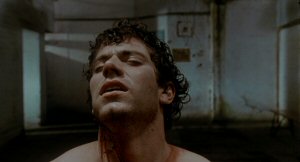 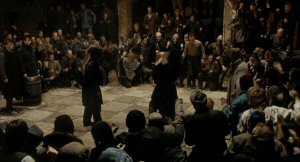 Born American is classic 80s action with an exploitation touch. The budget is limited, but the director hides it well. The beginning is filled with jokes and adventure spirit, but the film soon takes a darker turn. The men’s encounter with a small hostile village is classic genre stuff. Harlin uses moody sountrack and atmospheric outdoor images to illustrate our ill fortuned heroes’s journey deeper and deeper into the heart of darkness. At the end of this path awaits a deadly prison where not everything is as first seems.

There are a few aspects that can make the film work on different levels for Finnish and international audiences. The fact that the Russian characters are mostly played by Finnish actors may be of disturbance to some, although I’d imagine it passing unnoticed to most non-Scandinavian audiences. Understandably the film is shot entirely in Finland, but since the the storyline takes place just behind the border (thinly populated area on both sides), there are no geographical or other major differences to speak of.

Another interesting aspect is how the film displays its target country. Wild rumors and horror stories of the Soviet Union may have circulated the globe, but the Finns also had their doubts. American’s have always had their safe distance due to their location on the world map, but for Finns Born American depicts the frozen hell located just next door. Of course this is all just harmless fairytale, but to local audiences of the time it appeared to be too much. Perhaps it is indeed easier to enjoy Born American as self-aware exploitation entertainment today than it was 20 years ago.