In 1959, Filipino filmmakers Eddie Romero and Gerardo DeLeon first created their "Blood Island" tale for a film called Terror Is A Man aka Blood Creature. Almost 10 years after making that early film they decided to do more of the "Blood Island" movies. Brides of Blood (1968) was the first in a new trilogy of horror chillers that took place on an island that usually had some kind of deadly monster who preyed on the unknowing guests and beautiful nude women that lived there. Our Blood Island Vacation Guide will take you on a terrifying tour through this mad, macabre world filled with sights and sounds you've never experienced before.

Two scientists, Dr Paul Henderson (Kent Taylor) and Dr. Jim Farrell (Beach Blanket Bingo's John Ashley) arrive on the island along with Dr Henderson's stunningly sexy wife Carla (Beverly Hills) to investigate stories about plant and animal mutation a result of atmoc testing in the Pacific Ocean region. When the guests arrive on the island they witness a funeral in which the corpses body parts fall apart on the beach. As the new guests of the island begin to find out things arent as normal as they should be. The native inhabitants of Blood Island are sacrificing young beautiful virgins to a mysterious creature who was created from radiation experiments. The island is a living monster as well, as trees and plants seem to come alive at any sign of disturbance in the dark woods of the island. This adds a great element to the films already mutated creature storyline. This film is an extra special treat for lovers of Grindhouse-Drive In Cinema of the 60s and 70s. Filled with sexy nude women (you'll drool when you see the buxom, lusty Beverly Hills in her black nightgown), ultra-gory attacks by the Blood Island Mutant monster and strange natives whos devilish pagan ways keep the films pulse throbbing throughout the films running time. Directors Eddie Romero and Gerardo DeLeon brought a great style and exciting story to life with this low budget Filipino production. 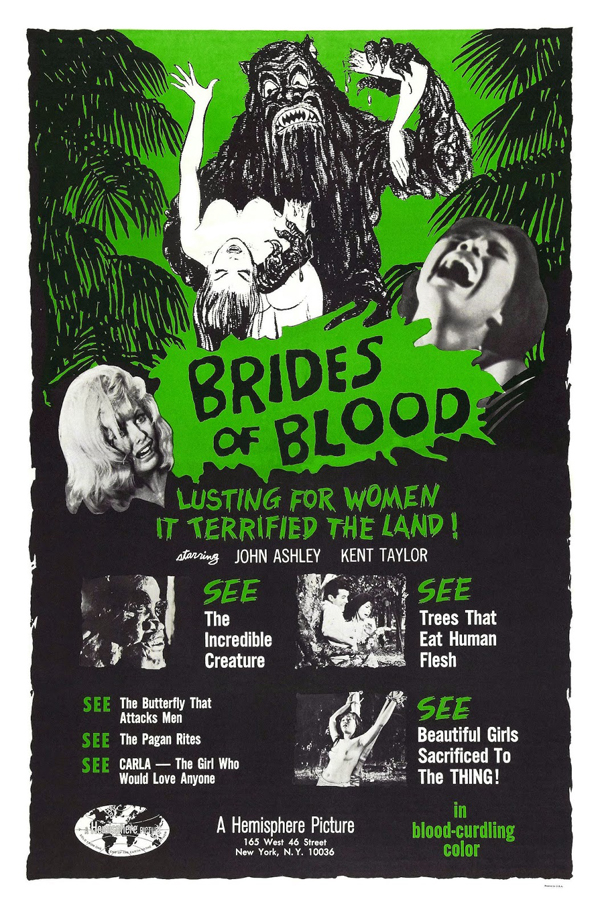 With Mad Doctor of Blood Island, Co-Directors Gerardo DeLeon and Eddie Romero served up another tasty, trashy treat for all the young teens who attended the inner city Grindhouses and suburban Drive-Ins in the late 60s. The film begins with a really fun "Green Blood" prologue. Producer Sam Sherman came up with this idea as a tie-in to the films story featuring a deadly Green Plant Monster. If you don't have any green blood on hand, make up a cold strong margarita and use that as your green blood instead. 60s film heartthrob John Ashley returns to the bloody proceedings this time as Dr. Bill Foster who travels out to "Blood Island" to investigate a chlorophyll disease thats spreading across the area. He is accompanied by Sheila Willard (the sexy Angelique Pettyjohn of Star Trek) a woman looking for her estranged father on the island. During her investigation, the sexy Ms Pettyjohn has other things on her mind, namely Dr Foster. Sheila also discovers that her father drinks a helluva lot to escape from the trouble on the island. Carlos Lopez (Renaldo Valdez) a protege of the family has lost his father "Don Ramon" so Sheila has agreed to take his widowed mother back to the mainland. Meanwhile, a mysterious doctor named Lorca (Ronald Remy of The Blood Drinkers) is conducting strange experiments in his secret lab...MORE 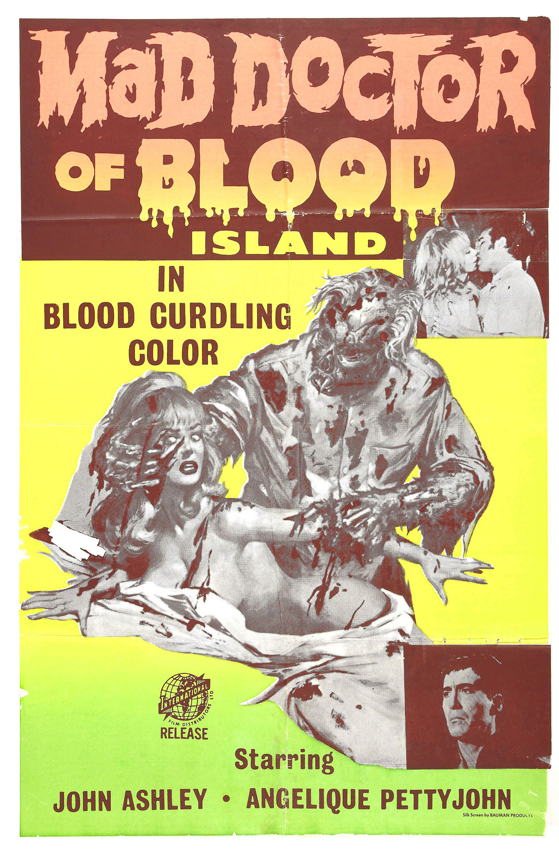 Beast of Blood begins with a bang as the half dead mutated "Green Blood" creature attacks a group of sailors on a boat returning to the infamous "Blood Island". The Green Blood creature goes Krakatoa on their asses with what looks to be a large axe, but it may be just a big stick. It literally slaughters them all. What a great way to open a 60s Exploitation film! While Beast of Blood takes place on Blood Island, the opening is really the last time we see the Green Blood creature as part of the main story. John Ashley returns once again as a scientist Bill Foster trying to find out the secrets behind the Blood Island deadly curse. Dr. Lorca (now played by Phillipino actor Eddie Garcia) claims he is now madder than ever. Lorca has also removed the Green Blood monster's head which he keeps attached to a large electronic machine. His main goal is to use the Green Blood body and attach different heads to the monster. While Lorca is performing his macabre experiments on the island, Ashley and his new companion, a female journalist played by Celeste Yarnall (co-star of the James Bond and Elvis films) find themselves in the middle of a new terrifying adventure as they follow Lorca's henchmen lead by the bald Razak (Bruno Punzalan) into the islands Valley of Doom where they are confronted with the horrors of Dr Lorcas failed experiments...MORE 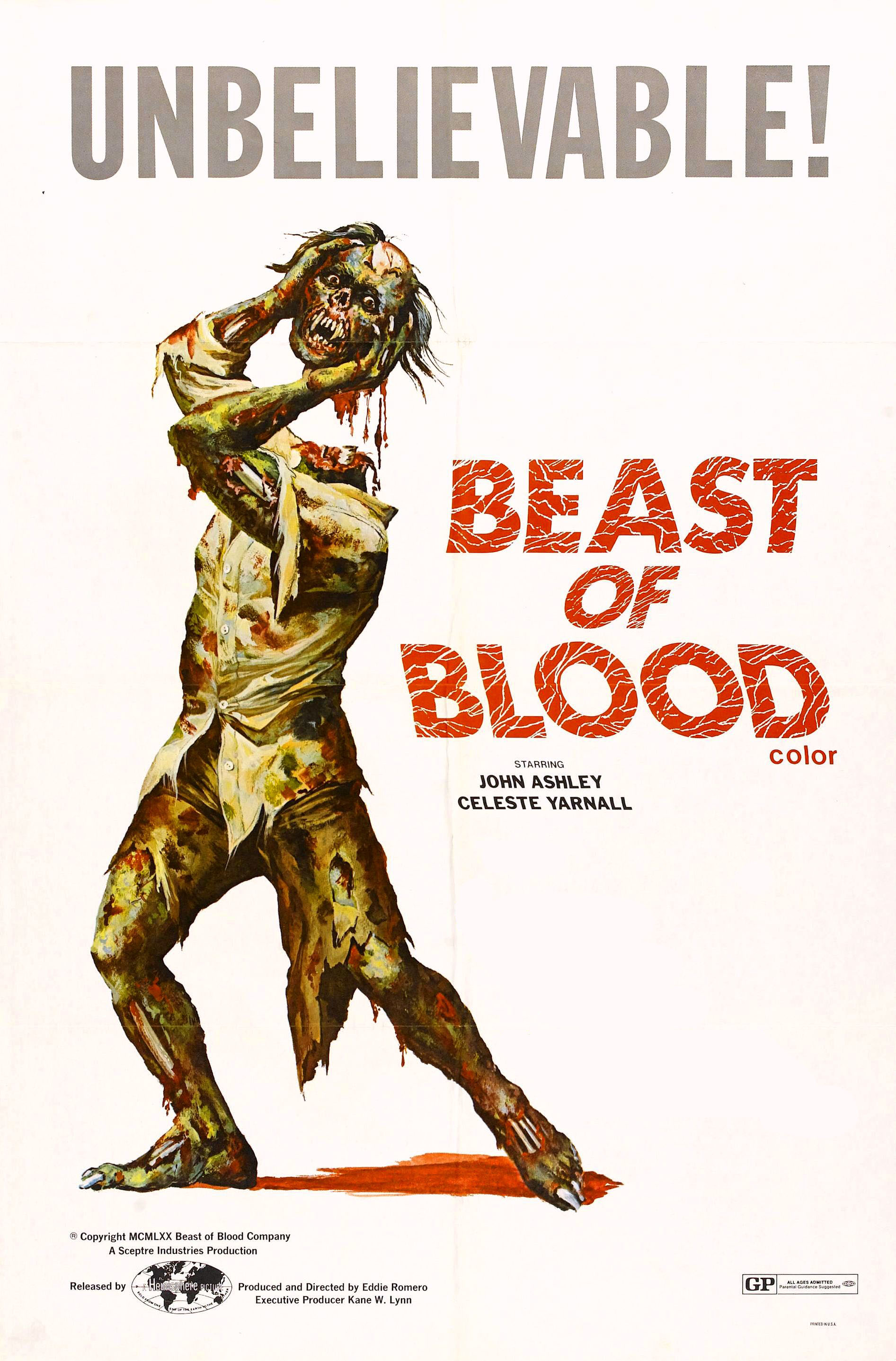 In 1971, the producers of Blood Island films had no new Filipino horror film for the new season, Director Eddie Romero was busy on another film at the time of Brain of Blood. He was working on a Women In Prison film called Black Mama White Mama starring Pam Grier. Romero handed over the reigns to Sam Sherman and Director Al Adamson to do their own new film in the tradition of the earlier Blood Island series. Adamson and Sherman came up with a rather strange storyline for a film they titled Brain of Blood. While many critics thought this film was shot in the Philippines like the previous films, it was actually shot in and around Hollywood. Another interesting note is that the score of this film was actually the same score used for Mad Doctor of Blood Island. This gave the film that certain Filipino Blood Island audio touch some maybe didnt notice while watching it the first time. In this new bloody tale, Dr Trenton (Kent Taylor) is in the middle of transplanting a brain from a dead former leader of the nation of Khalid named Amir (Reed Hadley). Hadley looks about as Middle Eastern as Johnny Cash!! The only problem is to keep his brain alive they have to put Amir's brain into a disfigured hulking dope named Gor (John Bloom, the Frankenstein Monster of Adamson's cult classic Dracula Vs. Frankenstein) and then things go wrong...MORE 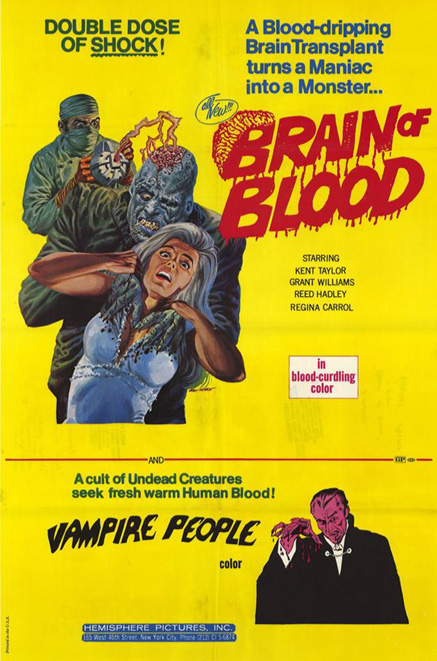