‘Prank-call’ has an innocent connotation attached to it because we find the word ‘Prank’ to be harmless. Often people call up strangers and make incorrect inquiries to get reactions from them. Comedians/Radio Jockeys have made fool out of many prominent world leaders by posing as someone famous, usually another world leader.

But beyond these acts of tomfoolery, the anonymity that a prank-call affords its perpetrator can bolden those with criminal intent under the impression that they can easily get away with their acts. Compliance by Craig Zobel based on a real-life case examines how an anonymous caller was able to trick the manager of a fast-food chain into believing that one of her employees has stolen from a customer and then makes the employee go through a sickening ordeal. 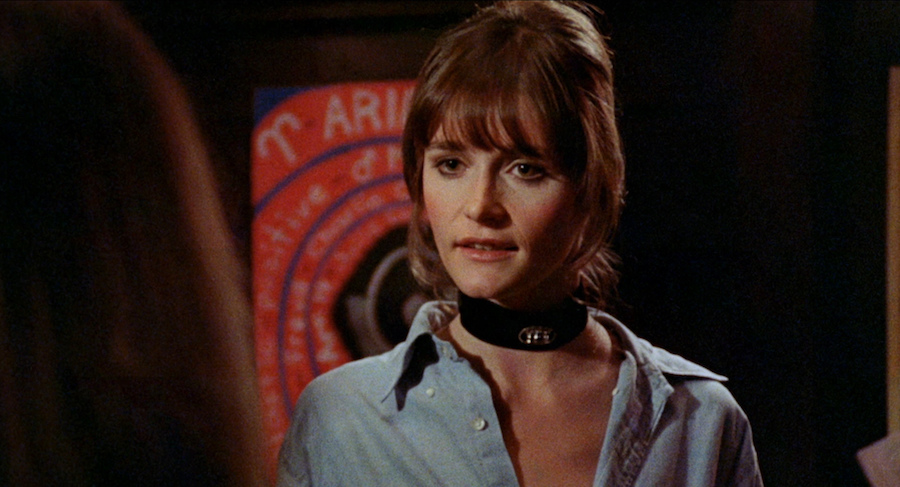 It is often when dealing with women that the innocuous ‘prank-calls’ take a darker turn. The deviants finding the supposed shield of anonymity let out their obscene thoughts in front of those whom they consider to be easy targets. It is something that has been explored well in popular culture. For instance, The Alfred Hitchcock Hour episode ‘The Night-Caller’ has a house-wife troubled by inappropriate calls from an anonymous miscreant.

One of the central events in Bob Clark’s classic Black Christmas is Billy, the unknown killer, disturbing the girls of a sorority home with his indecent calls and vulgar utterances. His calls are a known phenomenon and catches the interest of the girls who surround the phone when he calls. The loudmouth drunk Barb (Margot Kidder) tries to lighten up the environment by stating “He’s expanded his act” to the audience and even getting back at the caller with “Oh, why don't you go find a wall socket and stick your tongue in it? That'll give you a charge.” Her fightback raises the morale and helps a few to smile but some are perturbed by his obscenities with Clare stating that Barb shouldn’t provoke anyone like that.

We must remember that the caller doesn’t have a face or physical presence yet, he disturbs the girls by letting out his dirty desires in front of them. When Clare refers to a rape which took place two weeks ago in order to back her argument (Of not provoking a ‘disturbed’ stranger), it suddenly gives a shape to their fears. None of them are aware as to the identity of the caller, usually one either gets back at such miscreants (as Barb does in this case) or ignores them but in eventuality the idea is to treat them as insignificant ramblings and try to move on at a personal level (Even if one takes action/reports them to law authorities), rather than being held hostage to ‘words’ spoken by individuals who get a kick out of your reaction. 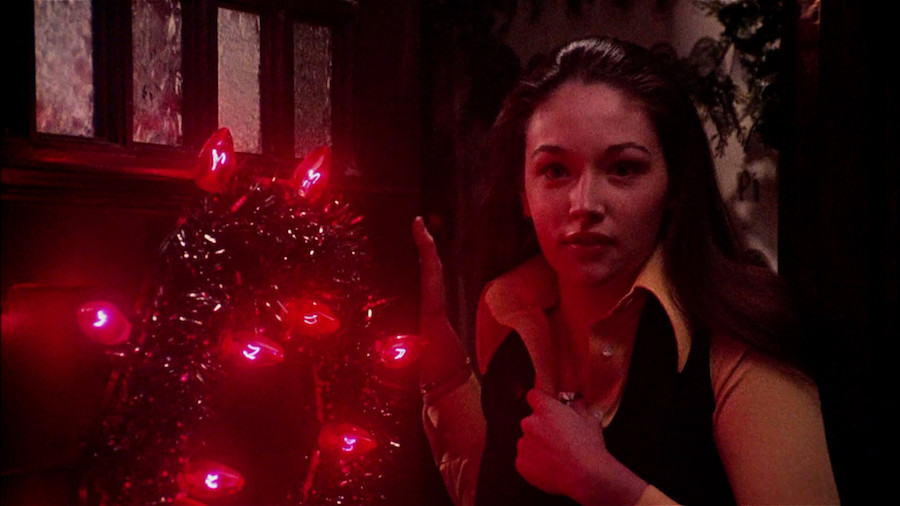 With this utterance the fear lingers on slightly longer. The event brings out the vulnerability that the girls face in the world. The connection between the calls and the crime that Clare refers to, lies in the fact that abusers believe that they have a control over the ‘existence’ of women.

As the movie progresses Billy’s calls become even more erratic with multiple voices coming from his end, confusing the girls. Adding to this gloomy atmosphere is the disappearance of Clare, the rising crimes around them and the loneliness they experience in the holiday season. The emotional trauma that one experiences after finding a loved one missing or losing them is shown in the form of the concerned parents in the movie. While Clare’s father arrives the very next day looking for answers, the missing teenage girl’s mother who approaches Lt. Fuller (John Saxon) has been doing the round of police station for quite some time while looking for her daughter. They are made to face indifferent cops with regressive attitudes (Sergeant Nash with “I don’t know if it’s any consolation, but ninety percent of the times girls are reported missing from the college, they are around in a cabin somewhere with their boyfriends.”) before someone higher-up takes their matter seriously, the trauma of actually facing the ghastly situation haunts them (showcased by the reaction of the girl’s mother in the park after her daughter is discovered) and they suffer the pain of not knowing the fate of their kids. (Clare’s father breaks down towards the end, even as the fate of Clare remains unknown to him)

The audience is aware that Billy is present in the very same house, taunting Jess (Olivia Hussey) while he goes on with his murderous acts and is a dangerous man. Billy’s scenes bring out the horror present in Black Christmas.

A mentally unstable individual hiding in the attic, where he has preserved the bodies of his victims, making obscene calls from the same house and becoming even more unbalanced with each passing moment (After one particular murder, he goes on a rage-induced carnage inside the attic) in a house full of characters unaware about this stalker or his crimes, creates a nerve-wracking atmosphere for the viewers. And yet the makers don’t use gore or cheap thrills to build the terror of ‘Billy’. He is present in the form of his ‘calls’, the PoV shots and in outlines (his shadowy figure is visible as he is about to attack a sleeping Barb) otherwise ‘Billy’ is shown in the form of an idea, which stays in the minds of the audience. 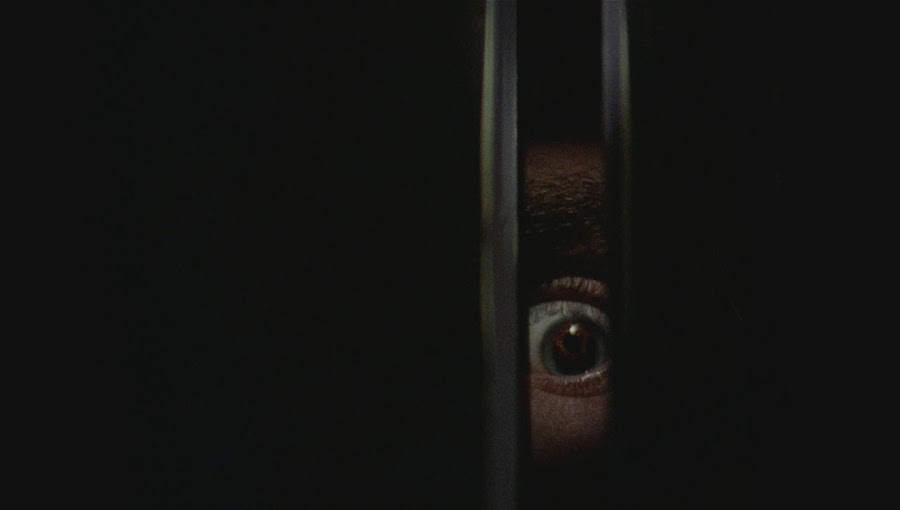 We are made to question his identity wherein the makers try quite hard to point fingers at Jess’s boyfriend, Peter (Keir Dullea). At the start, we are not even aware if the entity in the house and the ‘moaner’ are the same people. When he calls for the first time, he’s faced by all the girls in the sorority home, who though perturbed are able to forget him and get on with their lives. Thus, his ramblings come across as vague misogynistic rubbish at best.

However soon after that he commits his first murder and becomes a permanent resident in the attic. His later calls are picked up by Jess when she’s alone in the home or has limited people present near her, showcasing how the residents are vulnerable to the depraved maniac hiding in their home.

His actions have a certain precision to them, he waits for his opportunity to find the victims in a vulnerable state before attacking them. His more famous successors Jason Voorhees, Michael Myers have a certain degree of control over their victims once they’ve ended the stalking phase and entered the ‘hunt’ phase of their crimes with usually only the final girl surviving. Even if the characters try to fight back, the deranged slasher movie villains generally have the physical prowess (which at times seems almost supernatural in a way) over their victims. Here Billy chooses to strike when his victims are distracted, in a shock or asleep almost like a sniper waiting for their targets to make a mistake. These ‘one-strike’ kills fail when he meets some resistance from Jess.

By leaving the mystery unsolved the makers allow the viewers to take the idea of Billy with them. The entire build-up around the identity of Billy allows the movie to act like a thriller. Peter is shown to be distraught at Jess’s decision to abort their baby and later, her refusal to marry him. He is shown to be a disturbed individual who acts erratically and threatens Jess. This and the fact that Billy repeats what Peter had earlier said, is what makes him a prime suspect in eyes of the police.

Then there are the utterances from Billy which come across as nonsensical but have a certain repetitiveness to them or have a meaning to characters of the movie. He’s hysterical (“…I know what you did Billy, Filthy Billy”), repeatedly refers to someone named Agnes (“Please don't you tell, what we did Agnes!”), implores at one point for someone to stop him, is cold-blooded (states “I’m going to kill you” in a calm voice to Barb) and has awareness about Jess’s personal life. (“Just like having a wart removed.”)

While Friday the 13th, Halloween have someone behind the mask whose history is known or eventually revealed, Billy doesn’t wear a mask yet his face is not shown. His identity remains a secret allowing the movie to end with an unsolved mystery. The viewers are dropped hints as to the identity of the killer and one would expect the big reveal to come towards the end. The ending is a subversion of the entire build-up and the viewers are left to ponder as to what happened to Jess and whether Billy was ever brought to justice. 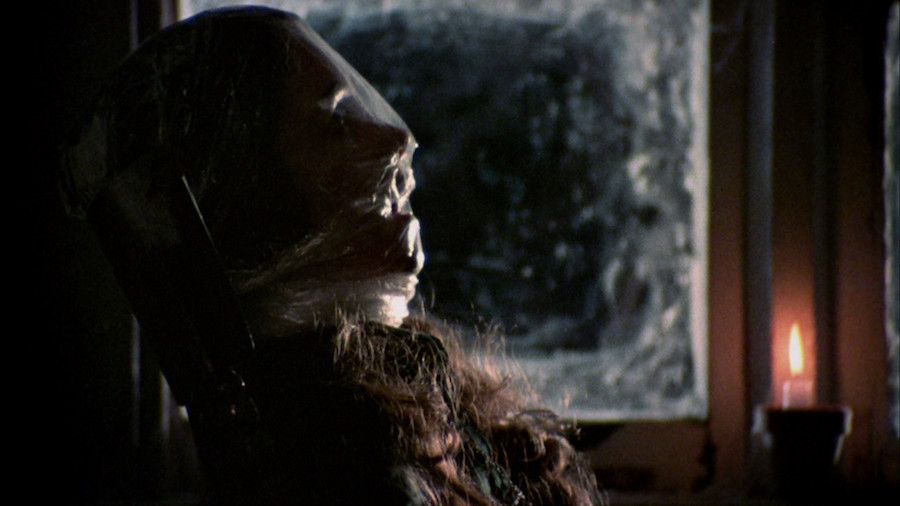 The film does surprisingly well in bringing out the lighter moments even amidst all the tense situations. Clare's conservative father is put opposite to the alcoholic Mrs. Mac, who tries her best to paint a better picture of herself but privately grumbles about the girls and her life. Sergeant Nash, definitely not the smartest police-officer in history of cinema, is tricked by Barb into believing that the exchange name for her area is ‘Fellatio’ which later makes two of his superiors nearly fall off their chairs as he tries to explain himself to them. Then there’s the situational humour which is brought about by Barb, Mrs. Mac and Clare’s dad (by being present at wrong places at the wrong time) on occasions. If I were to say if there are things this movie could’ve done better, I’d say one of them would be the background music. A soundtrack which could build up suspense or represent the fear that Billy brings to life (perhaps something out of the book of John Carpenter’s Halloween or The Thing) would’ve helped elevate Black Christmas to greater heights. Then there is the entire Jess-Billy-Peter confrontation in the end, which could’ve played out for a longer duration and given a more satisfactory finish.

Black Christmas is able to develop its own distinct tone through imbibing the elements of drama, comedy, horror, suspense into the slasher movie that forms its base. A precursor to several of the cult slasher movies of late 70s and 80s, it surprisingly never produced a sequel. Yet it remains an excellent film in its own right and will suck you easily into the grim world of its cold nights.