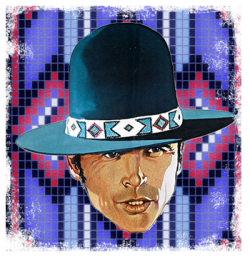 Billy Jack is a legendary half breed American/Native American Cherokee character played by Tom Laughlin in a series of 60s/70s cult classics. Billy Jack served in the Vietnam War as a Green Beret but not much is known about his prior history. When he came home from Nam in the late 60s he lived on the road performing in rodeos. He first appeared in Born Losers, in which he battled a group of rowdy bikers in a California coastal town.

In the film Billy Jack he had moved back to his home in the Southwest United States. There he lived somewhere in the mountains with an old Indian medicine man that was teaching him ancient tribal secrets. Whenever Billy would show up in town, it was usually when there was some type of conflict. Billy was known to protect the sacred land of the Indians from poachers and land barons. He also acted as a guardian for a special liberal arts school for kids run by his friend Jean Roberts, and battled the bullies in the town that were harassing the students and trying to close the school (which was seen as a counter culture problem). After an armed stand off with police, Billy made a deal with the local officials that if the school was able to stay open without any further trouble he would give himself up. Following this he was arrested and sent to prison.

His further adventures can be seen in the sequels: The Trial of Billy Jack and Billy Jack Goes To Washington.

Billy Jack is a master of the martial art known as hapkido and if provoked he can be deadly. It's most likely he learned these skills while serving in Vietnam in the Green Berets. He might also possess some kind of mystical Indian powers but that is not known for sure.