"King of the Biker Flicks" Johnny Legend presents BIKERMANIA, a brand new bike-u-mentary chronicling everything from "The Wild One" to "The Wild Angels" to "Werewolves on Wheels" - the entire spectrum of "chopper cinema" is here! You'll see bikers vs. Indians, rednecks, hippies, hairy monsters, white bikers vs. black bikers, gay bikers, chopper chicks and zombies and then some! Plus an in-depth look at the 50's and early 60's hot rod/biker-style movies, and a special section devoted to chopper-chick flicks!

Wildman/film historian/rocker Johnny Legend brings rabid biker film fans an adrenaline charged, chopper roaring collection of classic trailers from some of the genres best films!! You'll get over 60 minutes of thrills from the days when biker flicks were playing the drive-ins and grindhouses. After watching the exciting trailer compilation you'll get BIKERBEAT! a 35 minute featurette hosted by Johnny Legend. First up is an interview with Johnny himself, conducted by his old friend Beatnik. It was filmed at LA's Mondo Video in the 1990s and Johnny talks more in depth about the biker film craze, expressing his love for certain films while pointing out the duds of the genre. As a special bonus we get to see a few minutes of footage from a very low budget hippie biker film Johnny had a part in called "Pot, Parents and Police" (1972). Johnny doesnt seem to like it, but the video store folks consider it a true cult classic. Beatnik then interviews rock musician Davie Allan at The Whiskey A Go Go. Davie talks about all the biker films he worked on (including The Wild Angels) and we get to hear about his return to music recording and performing. Next, Johnny talks with the sexy Elske McCain and Regan Redding the stars of Killer Biker Chicks (2009). The final extra on the disc is some scenes from the sequel to a little film called Easy Rider (1969). It's the comedy spoof: Easy Riders II: Vengeance is Mine. The legendary duo of Captain America and Billy are back!...freshly rotten from the grave, and they're looking to get some payback! In closing, Johnny Legend's Biker Mania! is a fun joint or roach, a nicely put together tribute DVD that classic biker film fans will want to pick up and chill out with!! --Pete R. 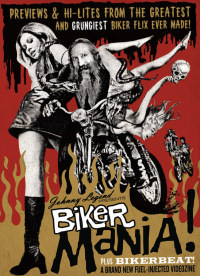