Though the movie seems to be more famous for being labeled as an Exorcist-rip-off, if one actually watches this, they're in for a much different film than expected. Rather than having a teen being possessed by the devil, a San Franciscan common wife/mother, Jessica Barrett (Juliet Mills), will be playing the demonical victim this time around. But even while this recognizable set-up tends to have the viewer anticipating a predictable outcome, along comes the mysterious Dimitri (Richard Johnson) who actually isn't playing an exorcist or a heroic savior, but a satanist! A satanist who has made a certain bargain with the Devil on how Dimitri's soul can be saved---With the help of the child that Jessica will soon give birth to. 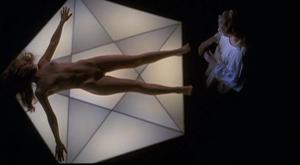 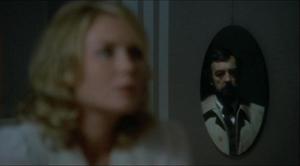 The marketing of this movie was what appeared to have gotten it in trouble with "copyright infringement." After all, the imagery seen on the film's trailers and marketing stills (displaying the sights of a possessed Juliet Mills looking and behaving in similar fashion to Linda Blair had done for The Exorcist) was enough to convince certain executives to get into a long-going battle on securing a history for "Beyond The Door." Okay, now with all the controversy aside, how does the movie fare? Well, I was honestly surprised with it. Some of the frightful paranormal moments (most notably occurring in the bedroom of Jessica's daughter and son) still hold up rather well. The makeup provided for the demonic look for Juliet Mills (though quite minimal) is still effective. There was also a great deal of effort put into the 4-track sound mix to enhance the atmosphere on key sequences. Though the resources for the complete library of sound effects could no longer be located for this newly-released version of the film, you could still get a good idea on how the soundtrack could rock a theater. 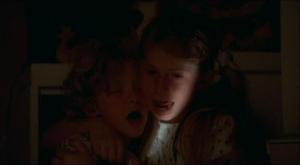 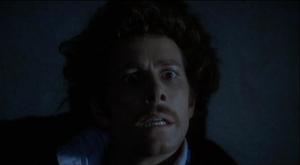 Another thing that I liked (and what had certainly kept me entertained for awhile) was the handling of Jessica Barrett and her family before the inevitable horror aspects kick in. As one would expect, the character of Jessica Barrett and her husband, Robert (Gabriele Lavia) along with their two kids are expected to personify the typical, happy-go-lucky family who innocently fall prey to evil. But nobody could have expected how much of a potty-mouth these kids are capable of delivering! Even Robert refers to his future baby as a "Bastard!" And this is way before he finds out that the baby really is a bastard! It isn't known for sure if this was dialogue verbatim from the Italian script, but director Ovidio G. Assonitis (who speaks fluent English) didn't seem to mind and left these character traits in! One last thing I admired was the film score by Franco Micalizzi. "Scary music" isn't the first thing that comes to mind when you hear the score in this film, but it's rightfully placed in the funk era and extremely catchy. 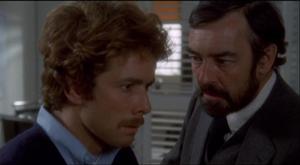 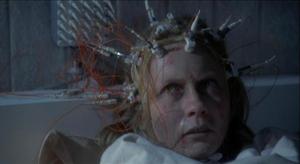 Though Beyond The Door made a big splash worldwide as far as box office receipts goes, there are a few reasons why it really hasn't obtained the legendary status of other genre films. One reason is that there isn't an enduring "Good versus Evil" theme to be found with the movie. And that results in having the audience not care about what happens to whom. Another reason is that the full 109-minutes of the complete version is definitely felt. Some more editing choices could have been optional. Plus, the disjointed (And often complicated) matters involving the Dimitri character tend to be hard for one to follow. But again, if you go into this film thinking it's sort of like an "Exorcist Part IV," you're bound to be slightly disappointed. But if you go in thinking of it as some sort of inspiration to "Angel Heart," you might find a surprisingly interesting story out of this.