The putrid corpse of a 7-year-old girl is discovered with an enormous nail driven into the top of its head. Inspector Bobby Wong arrests the girl’s father, Stephen Lam, on suspicion of her murder but when questioned in court Lam claims that he acted under the influence of a black magic spell. Lam confesses to Wong that 3 months previous, on a trip to Thailand, he enjoyed a brief romance with a local girl with the unlikely name of Bon Brown. On his return to Hong Kong Lam bragged about his sexploits to colleagues but later found that, despite the best efforts of his girlfriend in a warm bubble bath, he was unable to ‘knock on wood’.

Events turned even weirder for unlucky Lam when a charm that Bon had given him leaked a strange brown liquid which stained his chest before causing it to sprout thick grey hair and he caught his daughter eating raw liver from the fridge in the middle of the night. He visited a mystic old crone who prescribed a nine-inch nail driven through the little girl’s skull to exorcise her of evil. I guess that a couple of aspirin just doesn’t cut it against Thai black magic. 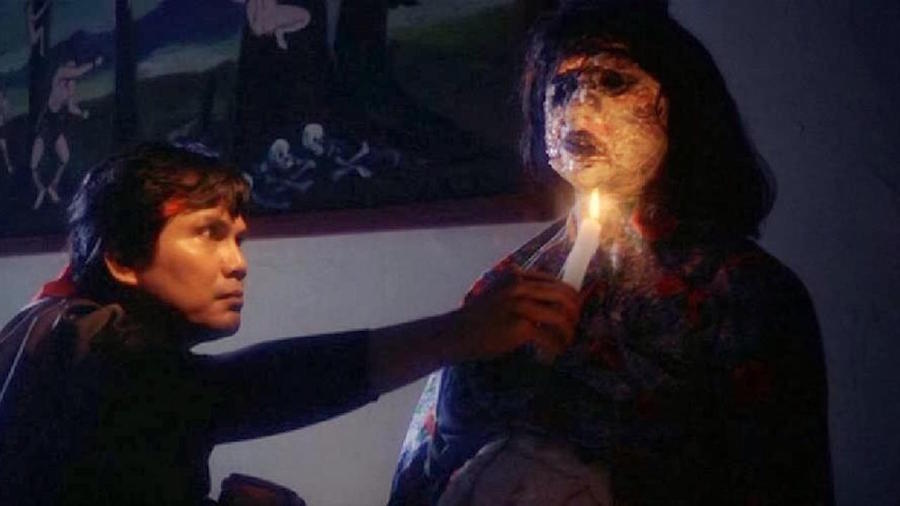 Inspector Wong remains skeptical until Lam shows him the pus oozing warts which have erupted all over his body and an unexpected outburst of poltergeist activity makes a mess of the policeman’s office. OK, so you don’t have to reside at 221B Baker Street to guess who is behind the vengeful curse but it’s a ton of fun watching the Hong Kong Tom Selleck in action especially when Wong too falls foul of the Thai voodoo and starts craving raw liver.

‘Bewitched’ is not the most stylish of Shaw Bros black magic themed horror movies however the Thai locations add an exotic dimension and the frequent ceremonies and spells are suitably bizarre with their burning incense, floating skulls, snake bladders and mumbled incantations. Some of the manifested curses are truly disgusting; in fact the ‘Worm Spell’ sequence had me dry heaving into my popcorn.

In Lam’s Thailand holiday flashback we get to see the lovely Bon take a superbly gratuitous topless jog along the beach, splashing through the surf with her bon bons bouncing, all in slow motion. Members of the audience sitting too close to the screen may be in danger of sustaining a black eye or two.

Topless jogging aside the film’s other main highlight is a brilliant Evil Wizard vs. Magic Monk showdown that’s a jaw-dropping special effects bonanza. ‘Bewitched’ gets 2 Fonzie thumbs up from me and if you crave an entire evening of Chih-Hung Kwei black magic insanity then it would make for a delirious double-bill paired with his similarly themed, and equally outrageous, ‘The Boxers Omen’.