Battles Without Honor and Humanity: The Complete Collection 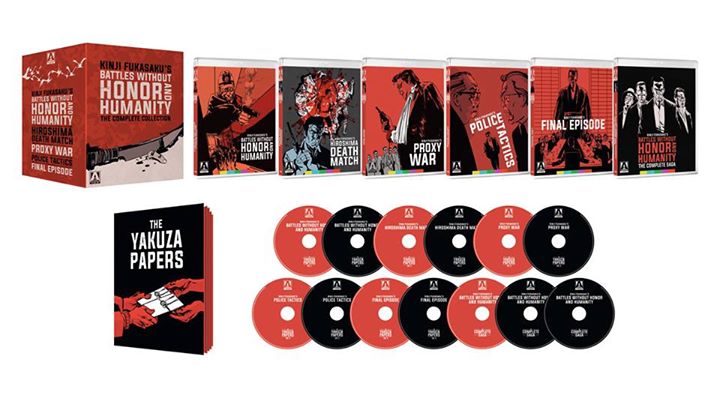 Kinji Fukasaku (Battle Royale) gave the world Japan’s answer to The Godfather with this violent yakuza saga, influencing filmmakers from Quentin Tarantino (Kill Bill, Reservoir Dogs) to Takashi Miike (Graveyard of Honor, Audition). Made within just two years, the five-film series brought a new kind of realism and ferocity to the crime genre in Japan, revitalizing the industry and leading to unprecedented commercial and critical success.

Literally exploding onscreen with a mushroom cloud, and ending with Hiroshima’s A-bomb Dome, the epic story of Battles Without Honor and Humanity follows over 100 characters through twenty years of gang wars, alliances, betrayals, and assassinations, in an exciting exploration of criminal power and politics in Japan. In the opening episode, ex-soldier Shozo Hirono escapes from the post-war black markets to become a key member of the Yamamori gang, but soon finds himself disillusioned by the selfish duplicity of his bosses. Hiroshima Death Match focuses on a demobilized kamikaze pilot drifting through the early 1950’s, whose suicidal impulses find good use as a mob assassin. Proxy War and Police Tactics form a labyrinthine, two-part story of ambition and betrayal set against Japan’s rapid economic growth of the 1960’s, with Shozo caught between warring factions. Final Episode concludes the series in the 1970’s as the former Yamamori gang transforms itself into an economic conglomerate called the Tensei Group, in a bid for mainstream respectability.

Fukasaku and his team broke with the longstanding studio tradition of casting marquee idols as honorable, kimono-clad heroes, defending their gang bosses against unscrupulous villains, and instead adapted true accounts torn from the headlines, shot in a documentary-like style, and with few clear-cut heroes or villains. The vibrancy and dynamism of the filmmaking, plus its shocking violence, Shakespearean plotlines, and wide tapestry of characters, launched a revolutionary new genre, establishing the series as one of the great masterpieces of world crime cinema.