Attack of the 50 Foot Woman/Review

An unidentifed flying object has been seen traveling across the earth. A news reporter (Dale Tate) indicates that the UFO is on it's way to the southern California desert. Too bad nobody in that specific region isn't watching the news to know what's going on! It will be poor Nancy Archer (Allison Hayes), a wealthy heiress, who will drive into the alien which is a gigantic space man who shows some interest in Nancy's...necklace? Nancy's estranged husband, Harry (William Hudson) is currently making the moves on local vixen, Honey Parker (Yvette Vickers) at the town's hot-spot (Named "Tony's") when Nancy comes crashing in to make a scene on what she's witnessed. We find out that Nancy had previously spent some time the looney bin, so of course, nobody will believe her story. But Sheriff Dubbitt (George Douglas) plays along and takes Nancy to the site, where the alien appears to be long gone. Back at home, Harry's determined to make his divorce final (He only wants her out of the way for her money) but he also decides to play along with Nancy's "Alien hunt". So back they go to the site. This time, the alien appears and *Presumably* abducts Nancy while Harry turns chicken and hopes the giant alien will commit murder. Instead, Nancy is somehow returned to her home by the giant. But the contact Nancy made with the alien now has her becoming a giant herself! Dr. Cushing (Roy Gordon) shows up to have Nancy sedated and confined (You just have to go with the fact that a 50-foot woman is somehow able to fit and rest in her bedroom) but Nancy suddenly wakes up from her slumber and has some unfinished business with Harry--And will not be afraid to use her cosmic powers! 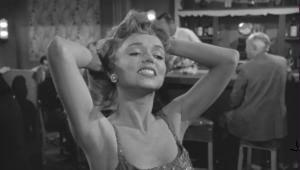 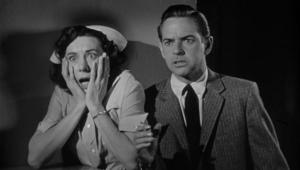 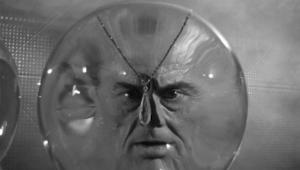 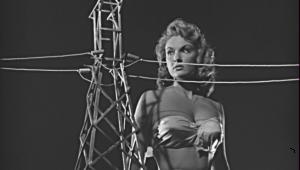 Hell hath no fury like a woman scorned.....Especially if she's 50 feet tall! That should have been the tagline. But we'll just have to live without it. The same way we have to live with the film's crude special effects. Though the laughable effects provides considerable charm and makes this movie the camp classic that it is, there was actually intention from the filmmakers to go back in in to fix up some of the "Ghosting" effects (The fact that there's a "See-Through" glitch that the giants have) but, this being a classic example of B-movies, there simply wasn't enough money to go back and correct the mistakes. But I'm sure I'm not the only to argue that this error benefits the movie and certainly makes it more memorable. And even if this wasn't a sci-fi movie, the acting of Allison Hayes tends to make her 50 feet tall alone! Though the truly, realized vision of the movie didn't quite make it to the filmmakers' standards, they still left quite a legacy behind. That specific legacy includes a fun, campy film along with one of the most famous movie titles ever concieved. And for what Joe Dante refers to as "The most iconic movie poster of the 1950s".