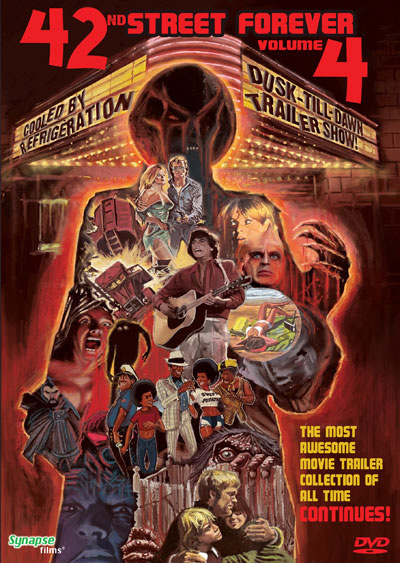 THE SYNDICATE: A DEATH IN THE FAMILY, GOLDENGIRL, COMBAT COPS, IT CAME WITHOUT WARNING, NO BLADE OF GRASS, YOR: THE HUNTER FROM THE FUTURE, SIMON – KING OF THE WITCHES, THE PSYCHIC, SCHIZOID, TENDER FLESH, DIE SISTER DIE, EMBRYO, SILENT SCREAM, NEW YEAR’S EVIL, RITUALS, MORTUARY, HUMONGOUS, THE TOWN THAT DREADED SUNDOWN, THE BOOGEYMAN, THE LEGEND OF BOGGY CREEK, GRAY EAGLE, SHADOW OF THE HAWK, AMERICATHON, CAN I DO IT… ‘TIL I NEED GLASSES?, UNDERCOVERS HERO, IN GOD WE TRUST, DIE LAUGHING, THE JEZEBELS, FIGHTING MAD, MOVING VIOLATION, BONNIE’S KIDS, BLACKOUT, BREAKING POINT, WALKING TALL PART II, THE KLANSMAN, THE SOLDIER, THE MONKEY HUSTLE, MARCH OR DIE, SHOUT AT THE DEVIL, HOG WILD, COACH, THE HARD HEADS, THE CHICKEN CHRONICLES, BEST FRIENDS, OUR WINNING SEASON, AND MORE…

The all or nothin' days, the good ol Grindhouse days are here again! 42nd Street Forever Volume 4 - Cooled by Refrigeration offers rabid fans of classic exploitation trailers a brand new trip back to yesteryear when movies weren't so PC and sanitized. These films were raw and exciting! This new DVD also contains another great running commentary so viewers can get more geek information on the classics. The genres that are covered on this edition are more varied from the other volumes. You'll get liberal sprinklings of Poliziotteschi, US Crime, Blaxploitation, Sci-Fi, Slasher Films, Gialli, Comedy, Indiansploitation, Hixploitation and Historical Thrillers/Dramas. Many of the films included in this edition are still not on DVD or even VHS. So you get some looks at long forgotten exploitation gems!

Trailer highlights: COMBAT COPS: This long lost William Girdler crime thriller has a very exciting trailer packed with action! It originally went by the title THE ZEBRA KILLER.... IT CAME WITHOUT WARNING: If Predator didnt rip this off....NO BLADE OF GRASS: A great looking post-apocalyptic thriller that features bikers and people going nuts....SCHIZOID: Not the Fulci giallo, but a slasher starring the king of eccentric film characters: Klaus Kinski!...NEW YEAR'S EVIL: The killer's reading of the line about being EEE-VILL is hilarious!...RITUALS: "It isnt a picnic, you're in for a big surprise". The song in the trailer is a catchy little jingle....SHADOW OF THE HAWK: Jan Michael Vincent and the late great Chief Dan George (The Outlaw Josey Wales) star in this supernatural Indiansploitation flick...THE TOWN THAT DREADED SUNDOWN: A very creepy trailer for a historically true thriller directed by Charles B. Pierce....FIGHTING MAD: Peter Fonda stars in this Straw Dogs meets First Blood hixploitation action-drama....IN GOD WE TRUST: A really fun trailer for a Marty Feldman, Richard Pryor and Andy Kaufman religious themed comedy....DIE LAUGHING: Remember Robby Benson?!...THE JEZEBELS: A badass trailer for a film about this wild girl gang...you may have seen the film which also went by the name SWITCHBLADE SISTERS! "If you go...its gonna turn out baaaad!".... BREAKING POINT: In the tradition of Walking Tall comes this Bo Svenson revenge-action thriller about a man targeted by the mob, some amazing stunt sequences in here....BONNIE'S KIDS: Tiffany Bolling (The Candy Snatchers) and a young Robin Mattson star as sisters who get caught up in some crimes. I love the face off between Robin Mattson's character and her father...WALKING TALL PART II: Bo Svenson (Inglorious Bastards) takes over for Joe Don Baker as legendary Tennesee sheriff Buford Pusser!....THE KLANSMAN: In the tradition of tick...tick...tick... comes this Lee Marvin/Richard Burton Vs. The KKK crime drama.... MONKEY HU$TLE: Yaphet Kotto and Rudy Ray Moore team up in this Blaxploitation crime-comedy about grifters....Next, a movie with Trinity himself, Terrence Hill and....Gene Hackman? Yep, the two co-star in this 1977 historical drama about legionaires who must either MARCH OR DIE....A Canadian comedy-action movie starring The Terminator's Michael Biehn....What happens when a group of bikers go HOG WILD?....Remember Steve Guttenberg who gained fame with Diner and Police Academy? Well his debut film was called THE CHICKEN CHRONICLES, it's about a young teenager getting into all kinds of trouble. Co-starring Sgt. Bilko, Phil Silvers....BEST FRIENDS: Strangely, the trailer has no title card or credits, just a voiceover that mentions that the kids are "Best Friends". I love the poster for this film, but according to the DVD commentary, it is just another Crown International Pictures misleading promotional ploy. The film's plot has nothing to do with what the poster implies.

FINAL WORD: Another fantastic release from Synapse Films. The DVD contains a nice variety of colorful exploitation genre trailers to watch. The transfer itself is remastered but the movie prevues still are nice and artifact filled. Grindhouse fans will certainly want to pick this new volume up and continue the fun of revisiting the classic exploitation theatrical trailer experience!