ACT OF VENGEANCE - BLACK SAMSON - CHAINED HEAT - COLLEGE GIRLS - THE CURIOUS FEMALE - THE DARK - DARK STAR - DELINQUENT SCHOOLGIRLS - DR. BUTCHER M.D. - DR. TARR'S TORTURE DUNGEON - THE EVICTORS - EYE OF THE CAT - FLESH GORDON - THE GRIM REAPER - THE GUY FROM HARLEM - HELGA - HELLS ANGELS ON WHEELS - HONKY - I, A WOMAN - INVITATION TO RUIN - MARK OF THE WITCH - MS. 45 - THE POM POM GIRLS - SAVAGE! - SAVAGE SISTERS - SHOGUN ASSASSIN - SPY IN YOUR EYE - STREET GIRLS - SUGAR HILL - SUPERMANCHU - TABOOS OF THE WORLD - THE TALE OF THE DEAN'S WIFE - THE TEACHER - THEY CAME FROM BEYOND SPACE - WHEN WOMEN HAD TAILS 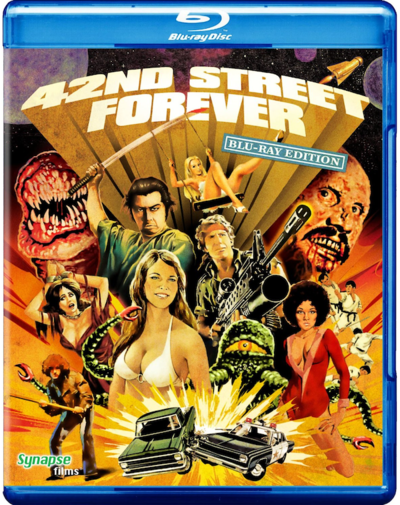 Synapse Films, the DVD distributor that brought you such classic exploitation titles as Thriller: A Cruel Picture, Nail Gun Massacre and Let Me Die A Woman have put together a tremendous trailer reel that will have Exploitation buffs around the world drooling. It's called 42nd Street Forever and its out now on DVD! Grindhouse Cinema was really quite a different experience than the usual mainstream moviegoing that most audiences went to see during the 60s, 70s and early 80s. These types of films were generally made on the cheap, but had real big thrills. The advertising (posters and film trailers) were designed to attract viewers by any means necessary. The promotional methods used for Exploitation films were really an art in themselves. The theatrical posters were filled with attention grabbing taglines, eye-catching, colorful artwork and the trailers were usually equally exciting to witness. Since the advent of VHS and DVD, there's been quite a change in how films are marketed. Gone are the days when over the top preview trailers and exploitation posters ruled. Nowadays we get bland voiceovers and dull trailers that use the same old tired pop score tracks. When was the last time you saw a film trailer that actually made you want to go see a movie ASAP? The good news is Don May and the cool folks at Synapse Films have put together a real treat for those of us who love film in all its weird and wild forms. The trailers you'll see on this new DVD are prime examples of what made Exploitation films so exciting and fun, not to mention unique. 42nd Street Forever begins with the trailer for "THE UNDERTAKER AND HIS PALS" in which we see a masked gang of motorcycle maniacs wreaking havoc on innocent civilians. Get ready for lots of blood and gore! A perfect opening to this variety pack of Grindhouse trailer treasures! The genres covered on this DVD range from Grindhouse Horror/Sci-Fi to Porno, Italian and US Crime Films, Blaxploitation, Sexploitation, Japanese Sci-Fi, Kung Fu, Nunsploitation and more! You'll get a sweet and spicy taste of everything Grindhouse on this DVD...

Some trailer highlights to look for on 42nd Street Forever: Flesh and Blood Show (awesome trailer!); the completely hysterical I Dismember Mama/Blood Spattered Bride trailer featuring some really strange filmgoers; Ginger (nuff said); a highly frantic trailer for the Peter Cushing horror vehicle: Corruption!; the Italian Stallion trailer (featuring a pre-Rocky Sylvester Stallone); Charlie and The Hooker (two nerdy alter boys trying to get some ass); John "The Wad" Holmes in 3-D!; a sexy rollercoaster ride (literally) in Panorama Blue; Wicked Wicked: the first film ever in Anamorphic DUOVISION! (I love the song the chick in the club sings); The Crippled Masters (two VERY unlikely kung fu heroes!; Superfuzz (Terrence Hill talking to a fish underwater in a crazy Sergio Corbucci crime film); the drop dead gorgeously hot Swedish sex kitten Christina Lindberg in a triple trailer line up for: They Call Her One Eye, The Depraved and Maid In Sweden; Chappaqua: This one is like an acid trip!; Shocking Asia: one of the most downright nasty trailers I've ever seen!; a very low budget, comical sci fi-horror film called The Deadly Spawn, which claims it's in the tradition of Invasion of The Body Snatchers and Alien!