Its been a while since I saw a crapfest such as this. From the start it was clear that I was going to despise the flick, although the full frontal nudity in the beginning wasn't half-bad. Why anyone, especially a female, would want to skinny dip alone in a old secluded lake is beyond me, but we get alot of that here. In fact there's one sequence where a group of seven girls, just finish a basketball game and decide to get fully naked and take a dip in the lake. Although this was supposedly set in the 50s it was clearly made in the 80s, and I guess bathing suits weren't a necessity back then. The story revolves around a town that's plagued by rumors of missing people around the 'lake of the damned' a name dubbed after a number of German soldiers were massacred and thrown into the lake.The story behind the lake goes back to the times of the inquisition where the lake was once thought to be a place of sacrafice to please the gods, and without one, they will rise from the depths of the lkae wrecking all sorts of havoc. This leads to our dead Nazi rising from the lake and doing harm to anyone who decides to trespass; apparently they weren't properly sacraficed. 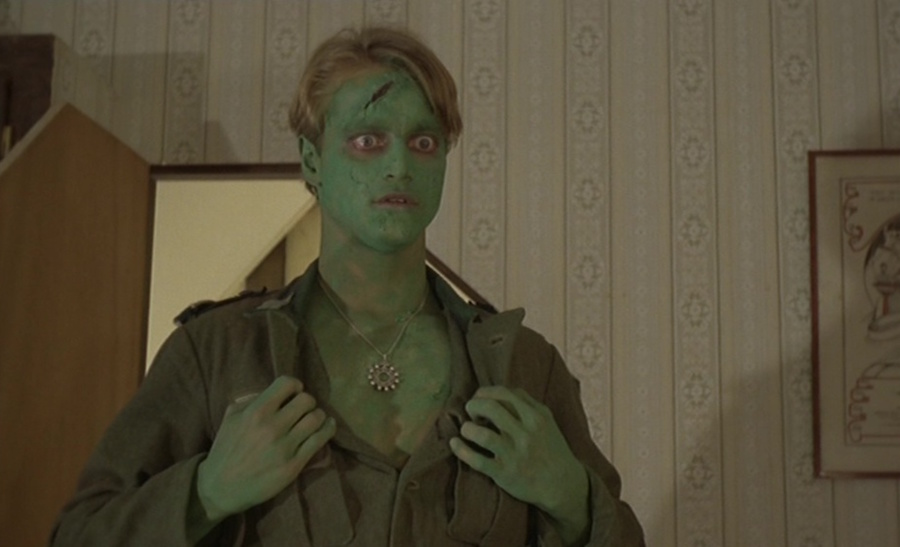 There's a 20 minute sequence explaining everything, or more specifically, showing us what happened since there's little to no dialogue throughout the entire sequence. In fact, there are many scenes in the movie that have no dialogue, which probably would'nt have done the movie much good anyway, especially with its incredibly slow pacing. There are even some scenes that last entirely too long, while others are just poinless. Whether it was intentional or not,there a funny scene involving a zombie returning home to greet his daughter(who wasn't born when he died),giving viewers what we want while watching a zombie film -- faimly bonding and much needed dramatic pauses.

Speaking of dumb zombies, the basic make-up is green -- yes there are no huge gashes, or clearly rotted flesh, but instead we have zombies that are just a little too moldy . On the plus side, there is a decent part in the film where the zombies decide to run amok in the town, although you wouldn't know it since it was way too damn dark to see what was going on, which was another continuing occurrence thoughout the film. You hardly guess this was a zombie movie since there was zero gore. Thats 90 minutes of my life I will not get back. I've seen some pretty bad zombie flicks in my years and this is another one to add to that list.The only thing that made it watchable was all the excessive nudity, but even then it was barely worth anyone's time. Avoid at all cost!!