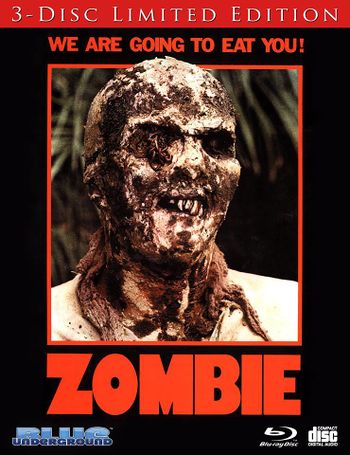 In 2018 Blue Underground re-released a number of Blu-rays with new 4K Masters - and they continue putting out catalog titles even in 4K UHD format now, one of the first companies to do so for these niche titles. For owners of the previous editions it is sometimes a hard sell because usually the difference is not huge. However Blue Underground makes an honest effort to deliver additional extra features for each of their re-releases to make these upgrades worth the money, and just with this one, there's still so much room for improvement each time they go back into the vaults and apply latest restoration technology to the original film materials.

I will not go into the movie too much at this point, for that you can read Pete's excellent review here. What follows are just some additional thoughts I had after revisiting the movie after all this time (must be years since I had last seen it). This comes, by the way, a few weeks after I had seen Dawn Of The Dead for the first time in my life, I thought I should mention that as an odd fact.

Quick story recap: An abandoned ship sails into Manhattan bay, a zombie on board attacks a harbor cop. Turns out it was Professor Bowles' ship, and now his daughter Anne (Tisa Farrow) is out investigating what happened to his research expecition. Joining her is Peter West (Ian McCullen), a newspaper reporter. They fly to an island in the Carribean, and join Bruan Hull (Al Cliver) and Susan Barrett (Auretta Gay) who are touring the islands on their boat. They convince them to take them to the island of Mutu, which the natives avoid because they think it's cursed. When they get closer to the island, things start getting weird. Meanwhile on the island, Dr. Menard (Richard Johnson) struggles to find a cure for a disease that befell the natives, while they turn to Voodoo...

Other than its supposed prequel (the movie is called Zombi 2 because in Europe, Romero's Dawn Of The Dead was released as "Zombie", "Zombi" in Italy) this is of course not about infected people type zombies but the actual undead. However, it's either voodoo magic, or a disease these dead people must have caught before, that leads them to rise from their graves, it seems. But this distinction is important as both types of movies are usually thrown into the same bucket. Fulci's zombies here aren't super dangerous, quick moving people killers, they are slow moving, dead corpses with an appetite and their victims at times seem to just be a bit slow to escape their bites or grabs.

As for exploitation content, the movie packs a lot of goods, from zombie makeup effects, open arteries, to some nudity, splatter (a lot of which still disgusts today), religious content and racist undertones, exotic locations and also some just flat out ridiculous stuff such as a zombie trying to eat a living shark. Today much of this comes across as just laughable, but back then it must have been nothing short than a riot. The movie wastes little time, sets great moments of atmosphere and does not kid around with killings, maimings and maulings. The outstanding musical score does the rest to create an eerie setting that the writers do not intend to quickly resolve and clarify for the audience until very late in the film, and even then a lot is left to interpretation. The creative effects and camera work (some from the perspective of the undead), and generally decent acting, make for a marvelous movie experience. Zombi 2 is - or was - a phenomenon back in the day, and is rightfully a classic. Downright enjoyable, ahead of its time and - on this disc especially - sharp looking as if it was shot yesterday.

This new edition for Zombie (by now superceded by a more recent one that has a 4K UHD disc and some more extras on it) comes in a lenticular packaging just like a few other recent upgrades such as that of Maniac. The image quality is, simply put, astounding. This new 4k Scan of the original uncut camera negative materials offers impeccable clarity, sharpness and detail as well as contrast levels. You have never seen this movie look that good, and it is more than just a minor upgrade from the previous editions. It's so crisp as if looking out the window, I can only imagine the extra detail and sharpness the even newer 4K UHD must have to offer, but this is already quite as good as it gets, if only more old movies were this well-preserved, it is a marvel.

As for sound, the disc offers original mono tracks as well as upmixes. Generally, as with this one, the upmixes are perfectly alright, as they didn't overdo it with the mixing and you're basically left with the original experience, plus some very subtle added atmosphere and a hint of stereo capability. It's not much, but it's a great update for the home cinema experience without tainting the original work.

The intro by Guillermo del Toro on this 40th Anniversary Edition is a really nice addition to a release like this, but it's just really short. If you were lucky you got this release in one of three different lenticular covers. Since the disc is region code free, this might be a great import even if you live outside the US or Canada, especially because they have included three audio languages and a whole range of subtitles making this a truly world wide release. The extras disc is also a BluRay, and then there is a CD with the excellent original soundtrack as well as a booklet with a new essay by Stephen Thrower, the author of the book Beyond Terror: The Films of Lucio Fulci.

Extras (Feature BluRay): There is a tremendous audio commentary with Fulci expert Troy Howarth, Author of Splintered Visions: Lucio Fulci and His Films and another second audio commentary with Star Ian McCulloch and Diabolik Magazine Editor Jason J. Slater. That's perfect nerd material to re-watch the movie numerous times and learn so much, it's fascinating. There' also a new interview with Stephen Thrower, Author of Beyond Terror: The Films of Lucio Fulci who also supplied some booklet liner notes, as well as trailers, TV spots, galleries and radio bits.

Extras (Bonus BluRay): You'll find an interview with Ian McCulloch, Richard Johon, Al Cliver and Ottaviano Dell'Aqua on there, as well as one with Fabrizio de Angelis, one with Elisa Briganti and Dardano Sacchetti, and one with Sergio Salvati and Walter Patriarca, one with Gianetto de Rossi and Marizio Trani we well as Gino de Rossi, and one with composer Fabio Frizii and one with Fulci's daughter Antonella. Then there's some more Guillermo del Toro for those who thought, like me, that the intro was a bit short.

What a joy to revisit the movie like this, and even more so to then dive into some of these amazing extras. They really outdid themselves on this one. The movie looks and sounds just fucking awesome. This has to be on everyone's shelf.

Published on December 1st, 2020 as party of this year's #Deucember. Screenshots via Bluray.com