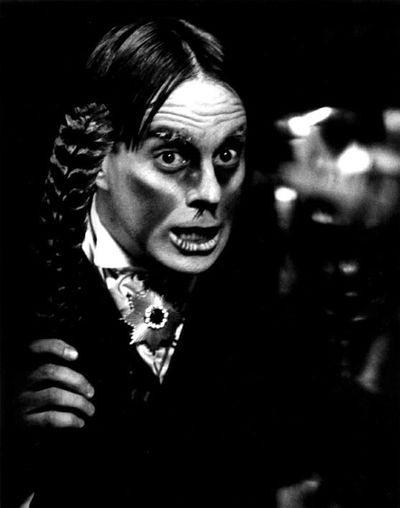 John Zacherle aka Zacherley (September 26, 1918 – October 27, 2016) was an American television host, radio personality, singer, and voice actor. He was best known for his long career as a television horror host, often broadcasting horror movies in Philadelphia and New York City in the 1950s and 1960s.[1] Best known for his character of "Roland/Zacherley," he also did voice work for movies, and recorded the top ten novelty rock and roll song "Dinner With Drac" in 1958.[2] He also edited two collections of horror stories, Zacherley's Vulture Stew and Zacherley's Midnight Snacks.

In 1954 he gained his first television role at WCAU-TV in Philadelphia, where he was hired as an actor playing several roles (one was an undertaker) in Action in the Afternoon, a Western produced by the station and aired in the New York City market. Three years later, he was hired as the host of WCAU's Shock Theater, which debuted on October 7, 1957. As the host, Zacherle appeared wearing a long black undertaker's coat as the character "Roland," pronounced "Ro-land", who lived in a crypt with his wife "My Dear" (unseen, lying in her coffin) and his lab assistant, Igor. The hosting of the black-and-white show involved interrupting the film to do numerous stylized horror-comedy gags parodying the film, an influential change which pioneered a now-standard television genre. In the opening sequence, Zacherle as Roland would descend a long round staircase to the crypt. The producers erred on the side of goriness, showing fake severed heads with blood simulated with Hershey's chocolate syrup. During the comedy "cut-ins" during the movie, the soundtrack continued to play on the air, while the visual feed switched briefly to a shot of Zacherle as Roland in the middle of a related humorous stunt, such as riding a tombstone, or singing "My Funny Valentine" to his wife in her coffin. The show ran for 92 broadcasts through 1958.

He was a close colleague of Philadelphia broadcaster Dick Clark, and sometimes filled in for Clark on road touring shows of Clark's American Bandstand in the 1960s. Clark reportedly gave Zacherle his nickname of "The Cool Ghoul." In 1958, partly with the assistance and backing of Clark, Zacherle cut "Dinner with Drac" for Cameo Records, backed by Dave Appell. At first, Clark thought the recording – in which Zacherle recites humorously grisly limericks to rock and roll accompaniment – was too gory to play on Bandstand, and made Zacherle return to the studio to cut a second tamer version. Eventually both versions were released simultaneously as backsides on the same 45, and the record broke the top ten nationally. Zacherle later released several LPs mixing horror sound effects with novelty songs.

The purchase of WCAU by CBS in 1958 prompted Zacherle to leave Philadelphia for WABC-TV in New York, where the station added a "y" to the end of his name in the credits. He continued the format of the Shock Theater, after March 1959 titled Zacherley at Large, with "Roland" becoming "Zacherley" and his wife "My Dear" becoming "Isobel." He also began appearing in motion pictures, including Key to Murder alongside several of his former Action in the Afternoon colleagues. A regular feature of his shows continued to be his parodic interjection of himself into old horror films. He would run the movie and have "conversations" with the monster characters. He kept his "wife" in a coffin on stage. His co-star was in a burlap sack hanging from a rope. The on-air conversation consisted of Zacherle repeating the words he heard from the sack. 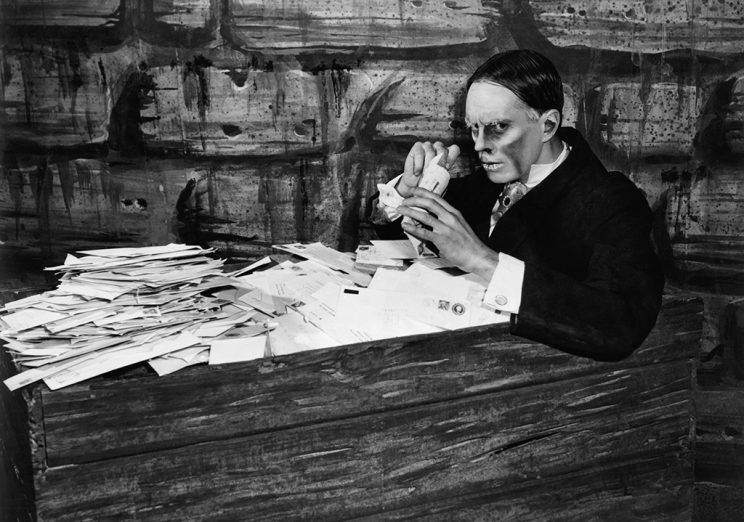 In a 1960 promotional stunt for his move to WOR-TV, Zacherley-- by then, a Baby Boomer idol-- staged a presidential campaign. His "platform" recording can be found on the album Spook Along with Zacherley, which originally included a Zacherley for President book and poster set which is highly collectible today. Also, in 1960, he was a guest on CBS TV's "What's My Line", on the October, 30th broadcast, as the final guest. Two of the panelists had to disqualify themselves, as they knew his identity.

In 1963 he hosted animated cartoons on WPIX-TV in New York. He also hosted the TV show Chiller Theatre in New York on WPIX.

In 1964 he hosted a teenage dance show for three years at WNJU-TV in Newark called Disc-O-Teen, hosting the show in full costume and using the teenage show participants in his skits.

In 1967, he became a morning radio host for WNEW-FM. Two years later in 1969, he became the station night broadcaster (10 PM–2 AM) for a progressive rock format. In 1971 he switched his show to WPLJ-FM, where he stayed for ten years.

In the early 1980s he played a wizard on Captain Kangaroo, appearing without his Roland/Zacherley costume and make-up. He continued to perform in character at Halloween broadcasts in New York and Philadelphia in the 1980s and 1990s, once narrating Edgar Allan Poe's The Raven while backed up by the Philadelphia Orchestra. 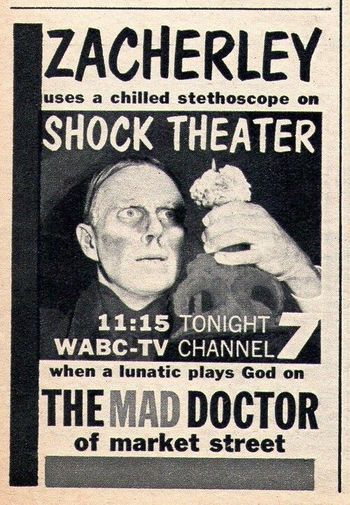 In 1986, he hosted a direct-to-video program called Horrible Horror, where he performed Zacherley monologues in between clips from public domain sci-fi and horror films.

In 1988 he struck up a friendship with B movie horror director Frank Henenlotter, voicing the puppet "Aylmer," a slug-like drug-dealing and brain-eating parasite, one of the lead characters in Henenlotter's 1988 horror-comedy film Brain Damage, and cameos in his 1990 comedy Frankenhooker, appropriately playing a TV weatherman who specializes in forecasts for mad scientists.

In 2010 Zacherly starred in the documentary, The Aurora Monsters: The Model Craze That Gripped the World. The film was written and produced by Dennis Vincent and Cortlandt Hull, owner of the Witch's Dungeon Classic Movie Museum in Bristol, Connecticut. The documentary includes a number of short pieces featuring Zacherly and his puppet co-host Gorgo, of Bill Diamond Productions. The film went on to win a Rondo award.

Zacherle continued to make appearances at conventions through 2015, and to this day, Zacherle collectibles are still selling, including model kits, T-shirts, and posters. The book Goodnight, Whatever You Are by Richard Scrivani, chronicling the life and times of The Cool Ghoul, debuted at the Chiller Theatre Expo in Secaucus, New Jersey, in October 2006. Scrivani and Tom Weaver followed it up with the scrapbook-style "The Z Files: Treasures from Zacherley's Archives" in 2012.[3]

He made a special guest appearance in Harry Chaskin's award-winning animated short film, Bygone Behemoth and recent on-air appearances include a two-hour show at WCBS-FM with Ron Parker on Halloween, 2007. A picture of Zacherley alongside fellow horror host Dr. Gangrene appeared in the October 30, 2007 issue of USA Today in an article about Horror Host entitled Halloween horror hosts rise again on radio, TV, film written by David Colton. Zacherley and Chiller Theatre returned to the WPIX airwaves on October 25, 2008 for a special showing of the 1955 Universal Pictures science fiction classic Tarantula!.

The Broadcast Pioneers of Philadelphia inducted Zacherle into their Hall of Fame in 2010.[4]