Woman in the Box II/Review

< Woman in the Box II

Sequels have bad reputation, but it was obvious from the beginning that Woman in the Box II would surpass the miserable original. The first film was a hard core filled compromise effort, made direct to video, that Masaru Konuma only directed to get finance for his original story. The sequel is the film he would’ve delivered in the first place if given a chance. It’s also not hard to guess that the preceding disaster motivated Konuma to put some extra effort into this production. 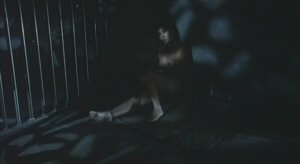 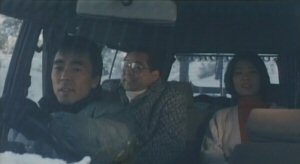 Indeed, Woman in the Box II redeems even before the storyline kicks off. While the first film showed how a maniac couple kidnapped an innocent girl, and then later moved to the torture phase, the sequel opens with the camera panning in a dark cellar prison where the victim is lying naked on the floor, already tortured and being kept in captivity for a longer time. The atmosphere is lifted directly from horror films, with skillful camerawork and excellent score making it all the more effective.

It turns out that the opening is not just a lucky shot, nor is it misleading. Woman in the Box II is not a pink film with horror, it’s a horror film with pink. And it’s mostly impressive. The story is set on a ski resort where a lonely man lures tourists into his trap and kidnaps and tortures them. Not too far off from Psycho and Norman Bates, actually, but without the mother. While the film is filled with dark images and even darker content, Konuma creates effective contrasts by mixing in beautiful mountain landscapes and outdoor scenes. The soundtrack is used effectively throughout the film. 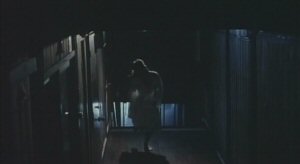 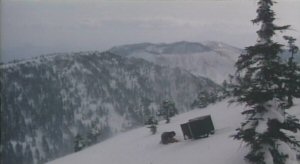 It’s almost a shame this film, too, is a Nikkatsu production. Konuma is still bound by the (soft core) genre requirements, which mean some ’less than vital for the storyline’ sex scenes. The film would work better as pure horror, although it’s very effective in this form, too. There isn’t much graphic violence, but the atmosphere is very threatening and intense. The cast doesn’t feature memorable performances, but no one goes below the (admittedly low) bar either. A small, hidden gem.