When we first meet "Willie D" (Roscoe Orman) he is livin the pimpin lifestyle and enjoying it to the fullest. The film opens very much like every pimp film should: Shots of Willie cruising in his funky purple and gold Dynamitemobile past the 42nd street grindhouses, while his "ladies" hook up with rich white men in fancy hotels. These girls don't work on the streets anymore, they only hustle the upper class johns! The badass main theme sung by Martha Reeves plays over the proceedings. 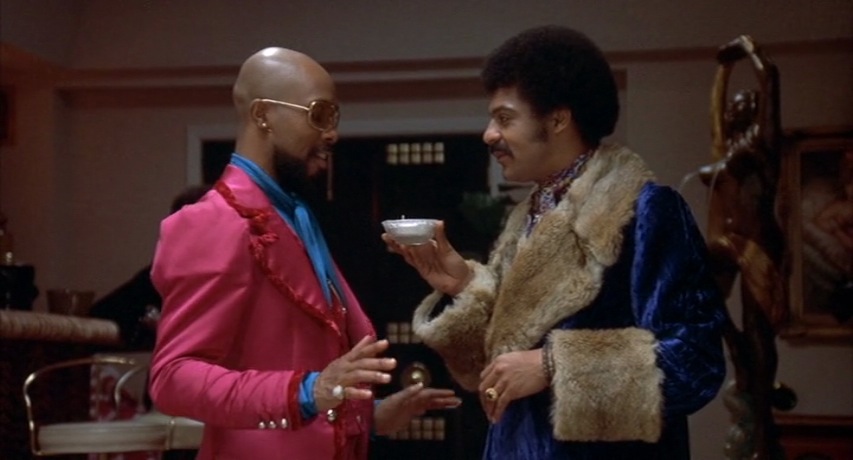 In Willie's mind he's in charge of the world around him, but he's gonna have a wake up call soon. The first chink in his armor is shown when one of his ladies is late for work. When she shows up, Willie gives her what for. Willie seems to have done his "the pimp rules" speech, but something's not exactly convincing about him. Willie and his partners have a gathering to discuss the current state of pimpin, (look for Robert Doqui, yes, King George from Coffy himself as one of Willie's fellow pimps!), and he offers another pimp some coke from his special "blow watch". After joking around for a few minutes, the main pimp of the area explains they have to start worrying about the heat (cops) thats coming down on them. They need to start sticking to territories and no more free hooking for their ho's. All the other pimps agree they should go that route (including one white pimp named "Milky Way"), but Willie seems hesitant. He puts up a fight, and shows he's not gonna go along with the group. Willie then says he has to "split".

Meanwhile the DA of the city, Robert Daniels (Blaxploitation film regular Thalmus Rasulala) and his sexy girlfriend Cora (Diana Sands) are talking about the state of crime, while rolling around in bed and having fun. Cora wakes Robert up by pouring a bottle of Coke on him. Cora has decided she's going to do something about the pimps and ho's working out on the streets. She realizes young black people need to be woken up and told a life of crime is a one way ticket to jail or the morgue. When Willie's main ho gets arrested and thrown in jail, Cora goes down to the station and tells her she needs to get out of that life. Willie gets her out of the jail and brings her home but Cora isn't far behind. She shows up when Willie isnt around and tries to tell the girls they are just slaves for him, that they should be working for themselves, not a bum like him. It doesnt do much, the girls want to live that way. 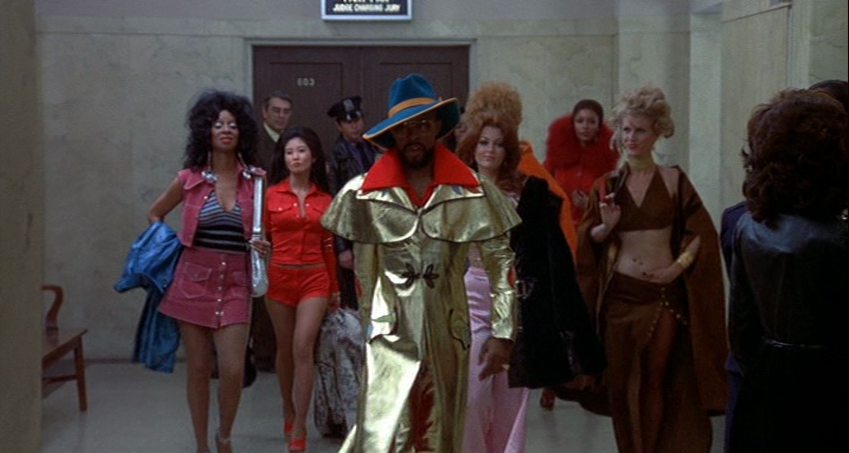 Throughout the film, there's a running joke about Willie's pimpmobile that keeps getting towed. Everywhere he parks it, its not long before the thing is taken away. This shows us that although Willie may be a flashy super pimp on the outside, he really is just putting on a front to seem cooler than he really is. The cops arrest Willie one day for no reason, they bring him in to basically give him a hard time. This pisses Willie off bad, and he tells the cops to shove it. They put Willie in a line up and after proving he isn't the guy they were looking for, he is let go. When he walks outside to get his car, the two cops that have been trailing him: Celli (George Murdock) and Pointer (Albert Hall of Apocalypse Now) confront him and say that what he's doing is wrong, like selling out his own "sisters" to make money for himself. Pointer then spits in Willie's face and we can see how much contempt he has for him. Willie calmly wipes the spit off and gets in his car, explaining all the false charges he was accused of. When Celli exclaims Willie must know all that stuff from reading up on it, Willie shoots back with a great line "No man, I just watch IRONSIDE".

Willie is having one bitch of a time with all the people out to get him, it's almost comical how many people want to ruin him. The head pimp that Willie turned his back on decides to jump him and they take him for a ride, only Willie has a gun hidden in his pants. When they tell Willie to drive to The Bronx at gunpoint, Willie guns the car and catches them off guard. He tells the one thug to get out and lay in the gutter, then he tells the main pimp to sit on the floor of the car. Willie buckles the seatbelt across his neck so he will "be safe " and takes off. When Willie gets to The Bronx, he makes the pimp strip down and leaves the guy there stark naked! A really funny trope thats been used in many films over the years. 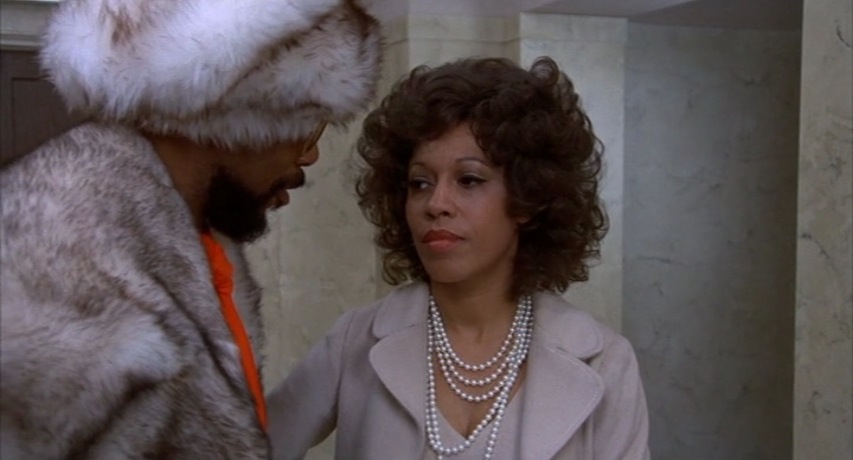 In a quick detour from the edginess of the whole pimpin world, we see Willie in fact has a family and they are regular, law abiding people. Willie offers his mother a gift and his sister seems to love Willie a lot. Willie's family dont seem to mind that he is a pimp, and his aunt acts as if she's impressed by this. We can also see what Willie has given up since becoming a flashy super-pimp: a family who loves him and an ordinary life.

The troubles never seem to end for Willie who gets chased through a construction site by Celli and Pointer. This time they are close as ever to getting him. The funniest thing about this sequence is the fact that Willie has this bright hot pink and white pimp suit on and he's getting it all covered in mud. Another comical aspect is Pointer running with this wacky style, its like he's trying to limbo while running. Hilarious! Willie barely escapes from Celli and Pointer after jumping on a crane like platform which takes him to the ground. So close...but Willie D is faster! 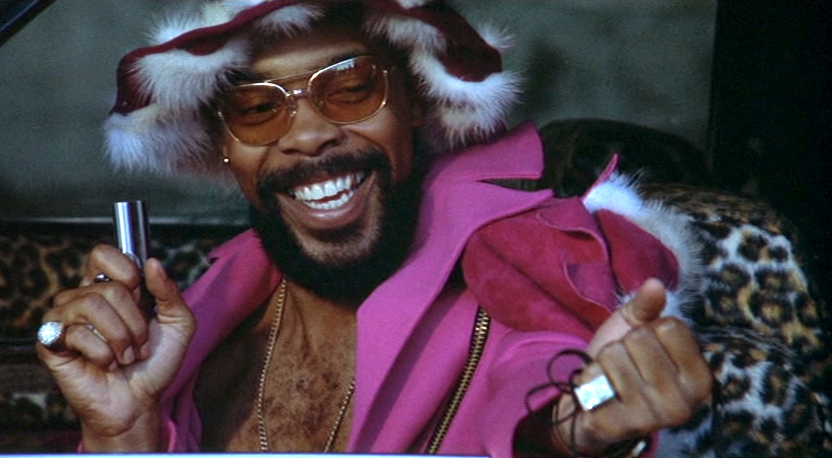 Willie returns to his pad and finds it destroyed and he's utterly exhausted. He collapses on his bed and not one minute later Pointer has a gun stuck in his face. They haul Willie in to jail and he's brought before the judge. Willie somehow gets out again, but he then seems to go nuts and begins to lose it. He even shoots his gun off at a pimp and a hooker (Foxy Brown's Juanita Brown). Willie's main ho, has been reduced to a scarred, afraid human being. Her face has been cut and she knows she cant continue living as a hooker.

At the climax of the film, Willie's entire pimpin business has been ruined. His mother collapses after attending his bail hearing and she's hospitalized. When Willie goes to visit her, she dies right in front of him and his sister. Willie finally breaks down and Cora tries to help give him advice. He finally comes to a realization that the pimping lifestyle is just a dead end.

Willie Dynamite is a true gem from the Blaxploitation genre. It's got an excellent cast, a super funky score, lots of humor and contains a story with a good moral message.