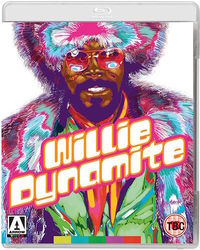 COMMENTS: Arrow Video's new hi-def Blu Ray transfer of WILLIE DYNAMITE (the only one you can get) looks beautiful. Since its a Universal Studios picture, the production value was high, so the print was nice even on the old DVD. Audio commentary by Sergio Mims is educational and fun to listen to for Blaxploitation and film historians. The only other bonus feature is the trailer. Overall, a supercool release recommended to exploitation film fans. Dig it. --Pete R.