< When the Screaming Stops

Something is attacking the inhabitants of a small town along the Rhine and ripping out their hearts. Angry villagers gather at a local pub to debate who, what, and why the killings continue. Attending this impromptu meeting is local crack-pot scientist, Professor von Lander, who has spent many hours perfecting an effective weapon to destroy a mythical beast that he’s certain is responsible for the killings; knowingly, von Lander listens to a tale spun by the resident beggar/musician who swears that the recent string of deaths signifies the return of a beautiful Rhine maiden, a woman cursed with the duality of a beast, returned from her sleep and feeding on human hearts to survive. Concerned for their safety, headmistress Elke Ackerman (smokin’ hot Silvia Tortosa) enlists the aid of hunter Sigurd (Tony Kendall) to patrol the grounds of her all-girl private school, hoping that whatever is doing the killing can be kept from their surroundings.

The following day Studly Sigurd arrives on campus riding his motorcycle, and causes quite a stir while strutting around in his open shirt and incredibly tight bell-bottom pants, basking in the attentions of the female students who crowd around him eager for attention. Elke takes an immediate dislike to this manly-man’s arrival and his subsequent affect on the entire student body’s libido, including her own. Tony Kendall plays his character with the ultimate touch of machismo, a cartoonish visage of manly good looks strutting around in tight pants while flirting with every attractive female he meets. Sigurd’s cavalier approach towards the opposite sex diminishes the relationship that eventually flourishes between himself and Elke, a failing of director Amando deOssorio’s characterizations. Curiously, deOssorio manages to subconsciously inject his penchant for male domination over women into Loreley’s screenplay, a predilection that manifests itself in just about every Amando deOssorio movie.

Silvia Tortosa’s character Elke, wears largely plain outfits with her hair tightly pulled into a bun, her strict demeanor given physical representation through conservative dress. Through deOssorio’s skewed viewpoint, Elke, a strict, woman-in-charge, could not possibly attract a stud like Sigurd; so, deOssorio bequeaths Elke with more “appealing” characteristics, appearances and dress afforded the usual attractive movie bombshell, a look deOssorio felt necessary to lend credence to Sigurd’s eventual attraction to her. Withholding the more voluptuous side of Elke until she and Sigurd finally embrace would have been an effective revelation; however, you can’t blame the filmmakers for their eagerness to show off the absolutely gorgeous Tortosa at their earliest opportunity. Early in the film she is shown lounging poolside in a two-piece bathing suit, or wearing sheer lingerie while preparing for bed, premature nuances to Elke’s character which undermine scenes depicting her dressed as a strict schoolmarm. 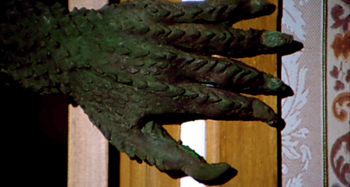 Sigurd patrols the school property during the evenings, amusing himself while prowling the grounds by watching the flirtatious displays given by students preening themselves in front of their open bedroom windows. Sigurd leers and winks at the girls while they smile and blow him kisses in a hilarious scene of voyeuristic male fantasy.

Refused access to their pool by Elke the following morning, Sigurd takes his studly self out into the countryside for a swim in a nearby lake. While scoping out the terrain, Sigurd spots beautiful Loreley (Helge Line’) lounging by the water’s edge in a fringed green bikini; the woman avoids him, picking her way through the muddy landscape as the camera captures the unmistakable body language of a very uncomfortable actress gingerly stepping through marshlands on the balls of her feet, obviously not thrilled about running through the muck barefoot while dressed in a bikini.

Sigurd revisits the marshlands and eventually makes contact with the mysterious woman, managing a romantic tryst with her inside a fisherman’s shed. Mistaking his love making prowess as the reason Loreley suddenly goes limp in his arms, Alberic, a muscle-bound thug, suddenly appears, reprimanding Sigurd for keeping Loreley “out” for so long. Loreley’s “keeper” then scoops her up into his burly arms and walks straight into the lake while a disbelieving Sigurd stares after them.

A happenstance meeting with Professor vonLander introduces Sigurd to the weird theories of the good doctor, theories involving his use of “moon rays” and the results of their “photochemical” reactions on the molecular structure of matter. Demonstrating convincingly on a human hand that slowly grows large, dark scales after being exposed to a chemical injection and simulated rays of moonlight, Sigurd is told by the scientist that a beast going through similar transformations roams the land, and that he has spent a lifetime developing a radioactively infused dagger with which to kill it. Among the scientists collection of laboratory animals is a live sheep, revealing a wry sense of humor on deOssorio’s part, who also includes a very brief homage to his highly successful Blind Dead films during this segment when he zooms in on a very familiar looking skeletal limb hanging among various objects displayed on the scientist’s laboratory walls, a shot effectively mimicking the zoom shot used during the finale’ of Tombs of the Blind Dead when the ghostly templar knights board a train and slaughter its passengers.

Several killings later, including the blind musician and the local scientist, our intrepid hunter finally accepts the idea that a half-human creature does indeed exist, and that he’s been smooching with her/it in the marshlands for several days! Armed with a handful of dynamite, Sigurd dives into the waters just below the fabled cliffs of Loreley and discovers an underwater cavern, the residence of the beast, where a wealth of treasures from previous doomed ships, along with a few resident “cave ladies” (wearing what appears to be the lion-fur bikinis used on de Ossorio’s previous film, Night of the Sorcerers) keeping the lizard/fish/woman company. Sigurd informs his girlfriend that he’s breaking off the relationship and that he has vowed to kill her to end her reign of violence. 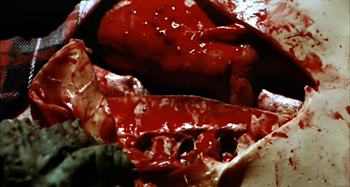 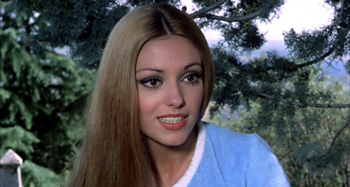 The underwater lair goes boom after Sigurd ignites the dynamite and escapes to the mainland where he scampers off towards the boarding school, realizing that breaking up with a lizard/fish/woman monster probably creates a dangerous situation for his “other woman.” Sure enough, Loreley targets Elke for revenge, but Sigurd arrives in the nick of time, using the radioactive dagger invented by the scientist to, in von Lander’s own grandiose words, “send her back into the legendary night from which she has come.”

Taking liberties with the myth of the Loreley (traditionally a siren who lured navigators of the Rhine to their deaths by enticing them to steer their vessels into the sheer, rocky cliffs), deOssorio crafts a tight creature feature utilizing the wonderful scenery of several locations, including the Alberche River in Madrid, Spain, the Rhine in Germany, and the ubiquitous ruins of El Cercon Monastery in Madrid, a location appearing in numerous European genre films of this era, including deOssorio’s own Blind Dead series and several Paul Naschy films.

Considering, as always, the time and money constraints associated with genre films of this period, the effects are very well done, aside from the occasional floppy rubber body part. Scenes of the creature ripping into hapless victims’ chests and extracting their hearts stand up well to the camera’s intense scrutiny. That said, it is disappointing that the creature itself is left shrouded in darkness for most of the film, an obvious rubber claw utilized for close-ups that announce the arrival of the beast, which waves the appendage in front of curtains or over door-knobs while cloaked in a black robe and hood. Quick shots of the monster’s face reveal the resemblance to a Chameleon, a creature shown earlier in the film among numerous animals on display in Professor von Lander’s laboratory.

Picked-up for distribution stateside by Independent Artists, the title was changed to When the Screaming Stops, and a gimmick involving a barely discernable red flash accompanied by an audio cue was inserted into the film to warn audience members of impending scenes of on-screen gore. This advertised “horror horn” stunt was used in conjunction with a barf bag printed with the film’s title and distributed to paying customers. Both of these gimmicks were not unique; a stomach distress bag was handed out to patrons of the Euro-hit Mark of the Devil in 1970, and the audio/visual alert made the rounds in the theatrical release of Chamber of Horrors in 1966.

Although the story is simple, the fabulous locations, effective use of gore, and the movie’s engaging characters guide viewers through an entertaining tale of supernatural hanky-panky; sexual tom-foolery that almost causes catastrophe for the manly Sigurd and the women and beasts who fall for his charms - two of which are displayed beneath his incredibly tight pants for most of the movie!