During the late 60s - early 1970s, the new rage in Exploitation Cinema was the Biker film. There were many good ones made during that time like: The Wild Angels (1966), Hell's Belles (1969), Satan's Sadists (1969), Bury Me An Angel (1971), Hells Angels on Wheels (1970) and Hell's Angels '69 (1969). With Michel Levesque's Werewolves on Wheels the horror and biker genres were combined to create a trippy, tongue in cheek monster movie that was put on double bills with other films at the time of its release like Evel Knievel (1972). NOTE: Director Michel Levesque previously worked with the "King of Sexploitation" Russ Meyer as art designer on films such as Beneath the Valley of the Ultravixens and Up!. 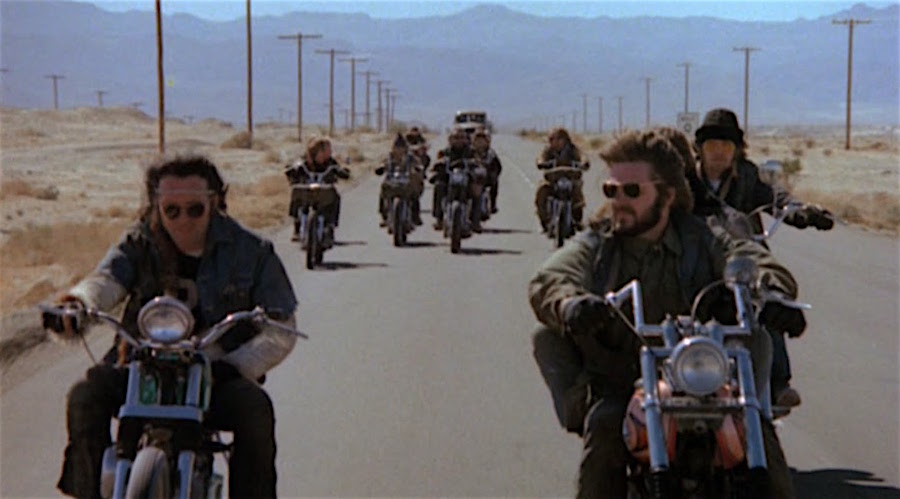 A group of bikers (called The Devils Advocates like in The Losers) are traveling across Southern California. The opening of the film is a groovy, fuzzed out rock intro as the gang cruise on the desert highways and bi-ways. They stop at a small cafe where the first thing they do is beat up a local "square", then they head inside and order some beers. The gang is led by Adam (Peyton Place's Stephen Oliver), a weird brutish hippy type biker who loves to joke around with the other members. His friend Tarot (Deuce Berry) reads tarot cards and tells people their fate. Helen (DJ Anderson) asks Tarot to read the cards for her, but he doesnt want to. Adam tells him to be cool and tell the chick her future. Tarot finally agrees and tells her what he sees. Well, lets just say it aint exactly positive. Another local comes into the cafe and the gang decide to give him a surprise. One of the bikers, Mouse (Owen Orr) grabs his "old lady" Shirley (Anna Lynn Brown) and tells the local what he needs is a woman! Shirley lifts up her blouse, exposing her breasts and the local begins to stare and studder: "Its a wo-wo-wo-wo..". Mouse throws her on the sofa and presses his face into Shirley's chest while the local hops on top of Mouse and grinds away (what the hell? he MUST be horny!) After their hijinks in the cafe, the gang hop on their bikes a keep on travelin'. 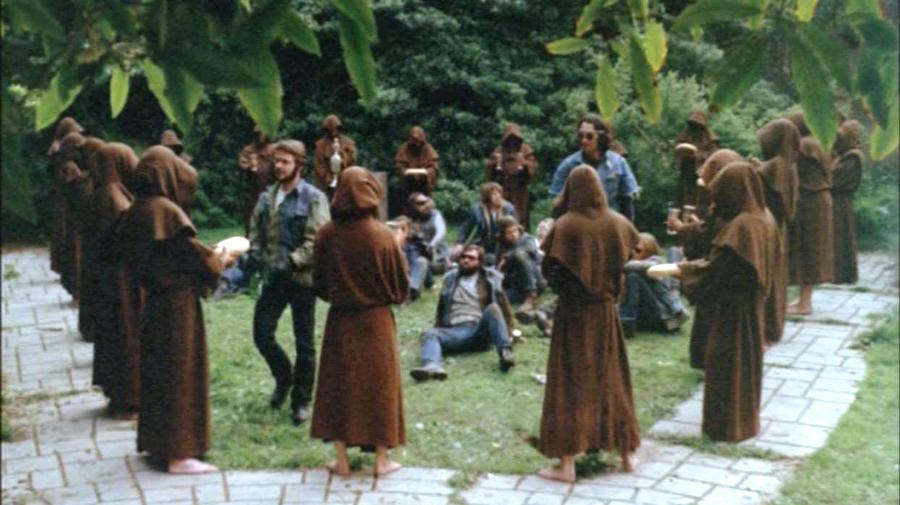 The group arrive at a strange place on the road where they notice a large church on top of a hill. The bikers are all drinking now and we get a real hippy style sequence where they just get wasted on booze and pot and roll down hills screaming to the church "Hey Lucifer!", "Hey Lucy!", "We're here man!" and such, laughing and acting like long haired monkeys. As the gang gets drunker, a large group of hooded monks surround them. They're led by the aptly named "One" (Severn Darden). They offer the bikers wine and bread, and the gang don't refuse. Adam & Co. grab the goblets of wine and the large loaves of bread and gorge themselves until they pass out. As night falls, the monks in the church begin to chant and we see that they aren't your ordinary God fearing brothers, they are worshipping old Beelzebub himself. Helen finally wakes up and walks up to the church where she is brought into the black mass. She dances nude with a snake (groovy!) and we get a bizarre satanic psychadelic sequence. The rest of the bikers rush into the church to find Helen where they get into a brawl with the monks and beat them up. During the fight, the monks mark each of the bikers with ashes from the satanic ritual (not good!). Adam, Tarot, Mouse and the other bikers decide to take off outta there! 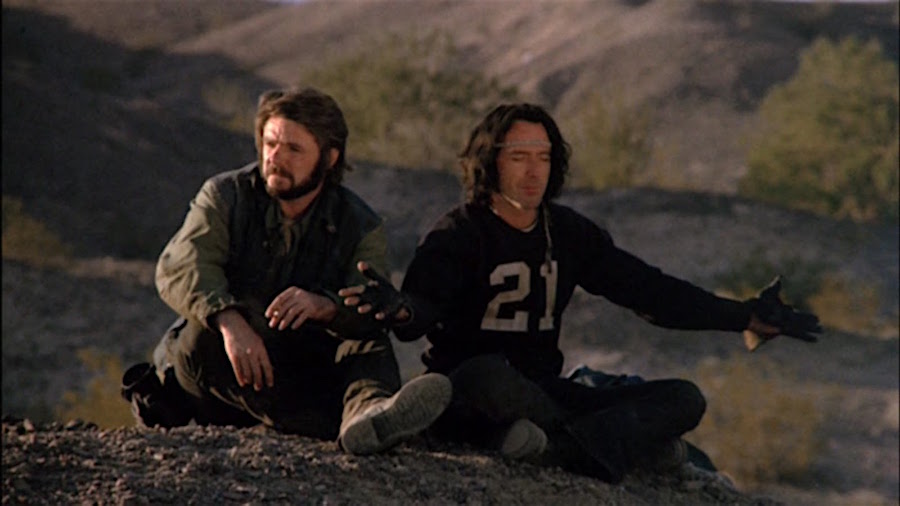 As the Devils Advocates travel along, strange things begin to happen. One night, they sit around the campfire and talk, drinking beers and getting high (hey its a 70s biker film!) but Adam is bitten by Helen and later Mouse is killed by Shirley (Trivia: this death sequence was so bloody in the original version the director had to edit it to get an R rating). The gang don't know that they have been infected with lycanthropy! Pretty soon The Devils Advocates are completely overtaken by the curse, which will turn them all into, yep, you guessed it: WEREWOLVES ON WHEELS! 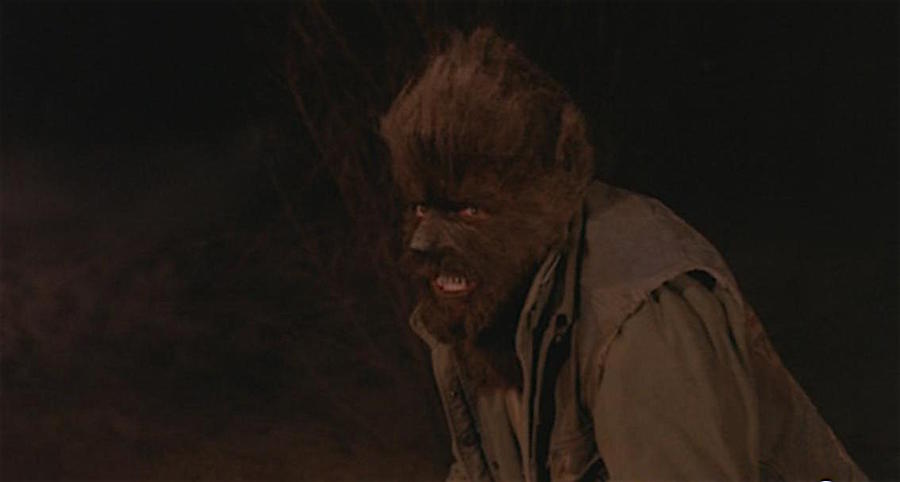 Werewolves on Wheels is a fun Exploitation film, and while the acting isn't particularly good, it's the kind of thing where you watch it and just have to laugh at the way the characters behave. There's lots of male on male hugging in the film (by Adam especially) that you can't help find strange since most of the time, bikers would rather punch someone out or stomp them. Well these bikers are more hippy than anything else. Free love babies! One sequence in the film, I found myself really laughing with is when the gang stop at this gas station in the middle of nowhere. There's this old attendant (Leonard Rogel, an extra the director found the day they shot this unscripted scene) with no teeth and a Billy Jack type hat. This guy is a total riot. As the bikers pump the gas (on an old fashioned gas pump that looks like a coffee percolater) he yells and screams at them saying all kinds of hilarious stuff that he made up himself. You can tell that even the actors had a hard time not laughing at this guy. He's a real character.