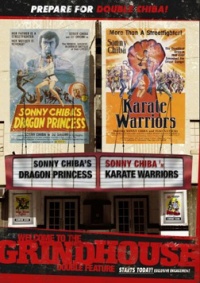 Dragon Princess: The BCI release is found in their Welcome to the Grindhouse double pack with Karate Warriors. The interlaced image is anamorphic and decently sharp, but the brightness level is set way too high. As a result colours have often gone totally missing. All the night scenes look like sun just exploded. The beautiful sunset background during the final fight is gone. There’s also color bleeding. The audio is in english only, in okay but not great condition. Still, this is way better than the old bootlegs. Just... well, there’s a reason why they are selling two films for $10.

As mentioned before, this is a double feature on one dvd. The program starts with two trailers (The Bodyguard and Legend of The Eight Samurai), and the first feature film, Dragon Princess, follows. It’s the American cut of the film. After the movie there’s an intermission and two more trailers (9 Deaths of a Ninja and Sister Streetfighter) before the second feature, Karate Warriors, begins.

Karate Warriors: The transfer is thankfully better than that of Dragon Princess. You can see it’s sourced from a poor print but it looks very much watchable. Print damage appears during cuts (first frames) throughout the movie, the image is sometimes greenish and colours look a bit pale. But on the positive side the colours rarely look too much off (although sometimes there’s a green shade on the image). The brightness level is pretty good, too. Underwhelming, but thoroughly watchable transfer and maybe more than you’d expect from a budget disc.

Audio is the english dub again. I was pretty distracted by it during the first 10 minutes but got used to it later. Dubbing wise it sounds okay, no extremely distracting voice acting here. Thankfully this is one of Yamaguchi’s less serious action movies (watching Worthess to Confess dubbed would’ve been a nightmare). The sound is generally a bit shrill which is a shame but considering this only a disc for temporary it’s alright I think. I’m unaware whether this US cut is identical to the japanese version (except from the english language credits of course) but I didn’t notice any footage that didn’t seem to belong to this film.