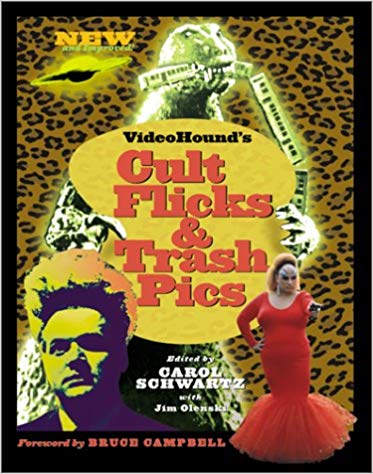 Fans of offbeat classics, fringe cinema, and midnight mondo sleaze will gravitate to this new and improved version of VideoHound's Cult Flicks & Trash Pics. Cult diva and connoisseur of mongrel video Carol Schwartz and her stellar cast of notable critics and scribbling outpatients, deliver 1,300 irreverent reviews of masterpieces and misfits, many of them rewritten and expanded. More than 250 are new to this edition, like Cannibal Holocaust, Switchblade Sisters and Ed Wood's 'I Woke Up Early The Day I Died'. Carol adds anime, underground and Hong Kong flicks to the weird, wild and wonderful mix. This much fun ought to be illegal. Cult fans will appreciate the increased number of cinematographers, writers and cast members in the entries; DVD availability; a Cult Connections resource guide to help further fanatic pursuits; and more, yes more movie taglines and quotes. (Amazon)

Published in 2001, Videohound's Cult Flicks and Trash Pics contains 1313 reviews plus 64 salutes (from Forrest J. Ackerman through Ed Wood). The reviews cover horror, scifi, fantasy, blaxploitation, drama, comedy, musicals, exploitation and all points in between. The book is filled with stills, posters and quotes. The reviews are alphabetical, from Abbott and Costello Go to Mars to Zu: Warriors from the Magic Mountain, and the films are rated on a scale from four bones ("The best of the best as well as the best of the beasts") to WOOF! ("not worth anyone's time"). There are also indices covering actors, directors, writers, composers and cinematographers, plus all kinds of categories. Definitely worth reading over and over.