The Section 3 List: This presents the official additional 82 titles that were designated under "Section 3" of the Obscene Publications Act by the Director of Public Prosecutions. These titles were liable for seizure and forfeiture by the police, removed from sale or hire and then destroyed; although they were not ultimately prosecuted. This amazing list was discovered whilst researching legal paperwork for the original "VIDEO NASTIES: THE DEFINITIVE GUIDE" and finally clears up why so many additional titles were historically considered to be "Video Nasties". Every shocking Section 3 title is presented with its original trailer and a newly filmed featurette that includes a wide range of notable genre journalists and acclaimed media academics that explore and uncover the sordid history of each release. 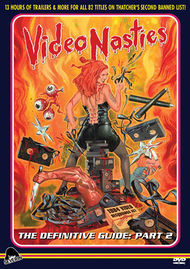