An ex-Vietnam vet/cop/race car driver named Kowalski (Barry Newman) is working as an auto delivery driver. His latest job is to take a 1970 white supercharged Dodge Challenger from Denver Colorado to San Francisco in two days. To make things more interesting he bets his local speed dealer that he can make it there in under two days. Kowalski speeds off and this begins a film that not only is an high octane car chase, but an existential story about traveling the road of life. 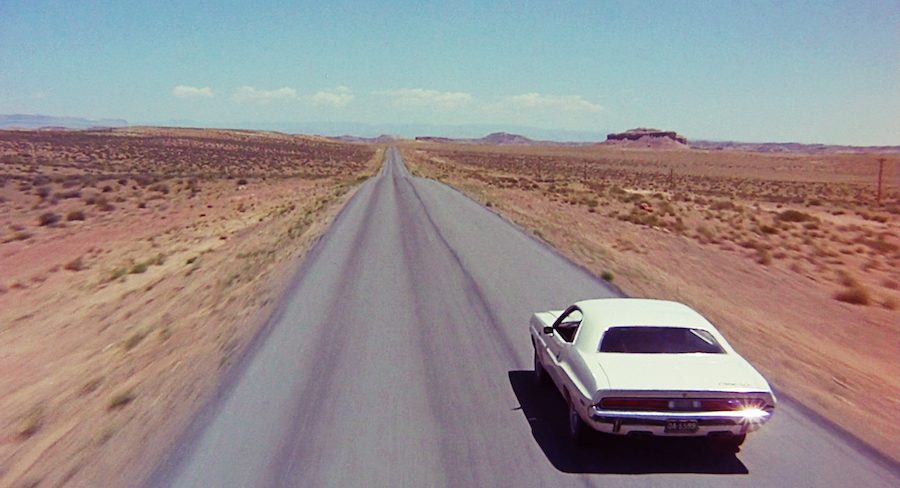 From the very start we get a feeling that this guy Kowalski is unstoppable. Policemen try to get him to pull over but he has no time for them so he just bumps them off the road. Kowalski has been a cop and through flashback sequences we learn that he knows firsthand that the police are just as corrupt as any crook.

We also see different periods of his life and these clips add pieces to the puzzle about Kowalski and why he is where he's at. When word spreads that a mysterious driver is being chased by every cop around, a blind radio DJ named Super Soul (Cleavon Little) sees this chase as a metaphor for freedom. He calls Kowalski "The last American hero" and a cult following forms around him. Super Soul acts as Kowalski's eyes and ears and several times throughout the film, the two communicate by a strange kind of ESP. Note: Look for John Amos (TV's Good Times) as Super Soul's production manager.

As Kowalski burns his way across the highways and biways of Colorado, Nevada and California, he meets several strange characters including a driver who tries to race him/run him off the road, two gay men who try to rob him (look for a sign on their broken down vehicle that reads: JUST MARRIED), an old snake wrangler (Game of Death's Dean Jagger) who helps Kowalski hide from the helicopters that are flying over the desert looking for him. Kowalski's last meeting is with a hippie biker who gives him some more speed. We also get to meet the biker's girlfriend, a woman who drives around naked on a motorcycle. She reminds Kowalski of his dead girlfriend who drowned while surfing a few years earlier. Actors Paul Koslo (The Losers) and Robert Donner (High Plains Drifter) play two racist policemen who beat up Super Soul in retaliation after Kowalski gets away from them.

As well as the incredibly sharp direction by Richard C. Sarafian and his DP John Alonzo, another big thing that stood out for me in this film was the dialogue. It's so well written, very poetic and precise. Not only do you get some incredible action sequences featuring the car but you get a really captivating story to bring it all together. I also loved how the film starts at the end, then brings us back to the beginning again. Yet another very cool aspect.

The soundtrack for Vanishing Point (like Easy Rider) is one of the first films to be scored by pop music of the time. You'll hear all kinds of classic tracks by up and coming artists such as Mountain, Bonnie and Delany, pre "Betty Davis Eyes" Kim Carnes and many more!