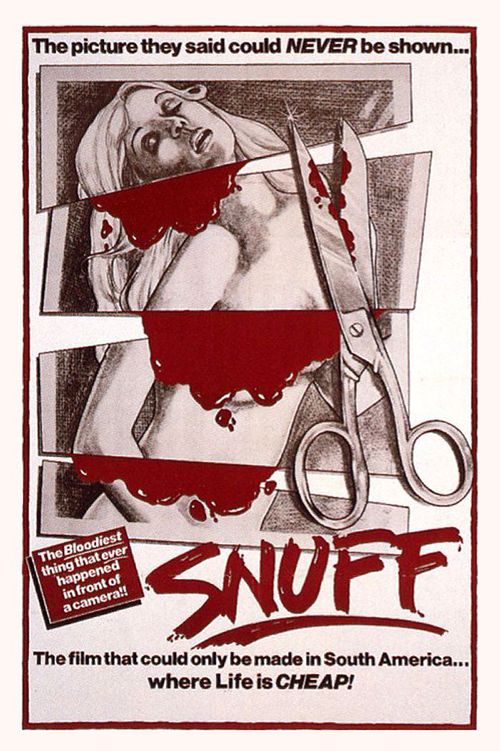 Snuff started out as a low-budget exploitation film titled Slaughter [a] made by the husband-and-wife grindhouse filmmaking team of Michael & Roberta Findlay. Filmed in Argentina in 1971 on a budget of $30,000,[2] it depicted the actions of a Manson-esque murder cult, and was shot mainly without sound due to the actors understanding very little English. The film's financier, Jack Bravman, took an out-of-court settlement from American International Pictures to allow it to use the title Slaughter for its Blaxploitation film starring Jim Brown. Some sources state that the Findlays' film received an extremely limited theatrical release,[3] while others indicate it was never screened theatrically at all under its original title.[1] In any event, independent low-budget distributor and sometime producer Allan Shackleton took the film and shelved it for four years—but was inspired to release it with a new ending, unbeknownst to the original filmmakers, after reading a newspaper article in 1975 on the rumor of snuff films produced in South America, and deciding to cash in on the urban legend. He added a new ending, directed in a vérité style by Simon Nuchtern,[7][8] in which a woman is brutally murdered and dismembered by a film crew, supposedly the crew of Slaughter.[9] The new footage purportedly showed an actual murder, and was spliced onto the end of Slaughter with an abrupt cut suggesting that the footage was unplanned and the murder authentic. This new version of the film was released under the title Snuff, with the tagline "The film that could only be made in South America... where Life is CHEAP!"[10] Shackleton also removed all other credits from the film to increase the air of mystery surrounding its production.[11

For its release Snuff distributor Shackleton reportedly hired fake protesters to picket movie theaters showing the film.[6] Although the film was exposed as a hoax in Variety in 1976, it became popular in New York, Philadelphia, Los Angeles and Boston.[12] Twenty female protesters protested the film's return engagement in Rochester, New York at the Holiday Ciné.[citation needed] Four of those protesters were arrested after they broke the poster frame to destroy the film's poster.[citation needed]

The rumours persisted that the film showed a real-life murder.[13][11] "[P]rompted by complaints and petitions from well-known writers, including Eric Bentley and Susan Brownmiller, and legislators", an investigation began into the circumstances surrounding the film's production[11] conducted by New York District Attorney Robert M. Morgenthau, who dismissed the supposedly "real" murder as "nothing more than conventional trick photography—as is evident to anyone who sees the movie".[12][13] Morgenthau reassured the public that the actress apparently dismembered and killed in the ending of the film "is alive and well", having urged the police to trace her.[14] A similar situation happened with Ruggero Deodato's Cannibal Holocaust, which actually was filmed in South America. Deodato was charged with murder because censors in Italy thought some of the actors were actually murdered for the camera. Deodato presented them alive and well and the charges were dropped, though the film remained banned for years.