Over the years there’s been lots of movies that I’ve heard great things about then finally watched and either was a) impressed by them or b) found them completely overrated (a word I don’t like to use often). One of those many films would be Monte Hellman’s Two Lane-Blacktop (1971). As a fan of both road movies and “carsploitation” films I knew the cult reputation it had. I think my first introduction to the film was when I read the book Waiting For The Sun by Barney Hoskyns, which was about the different eras of California pop music (everything from Jazz to Alternative Rock). There was a passage in it about two musicians The Beach Boys drummer Dennis Wilson and singer-songwriter James Taylor who were chosen to play the lead parts. Neither were trained actors, but exuded the kind of rebel cool that fit in perfect for the kind of characters they would be playing. 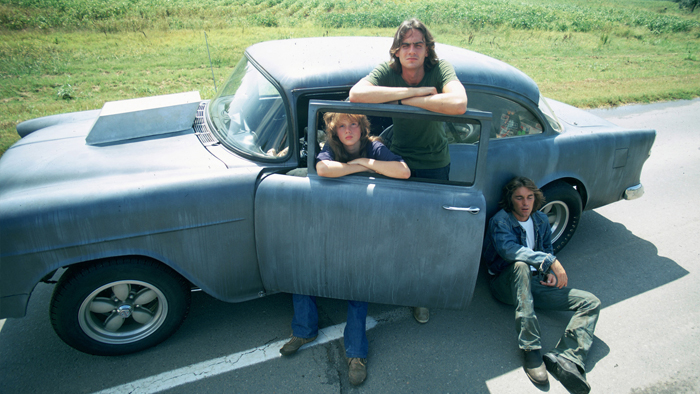 After seeing Two Lane Blacktop the first time, I was surprised because I actually wasn’t impressed with it at all, in fact I thought it was a boring and pointless exercise. The story follows two nameless friends “The Mechanic” (Dennis Wilson) and “The Driver” (James Taylor) who live on the road and make money taking part in auto races in different towns. Their hot rod of choice is a 1955 Chevy 150 two door sedan. The film completely fetishizes this car, for instance when they stop at gas stations they have to gently take off the trunk cover and check the engine which has a hatch front. Car nuts inquire whats under the hood etc and they humbly tell them the specs. All they seem to do otherwise is drive around in silence and when they do talk, you guessed it, it’s about the precious car. The story begins in Needles, CA and moves south on Route 66 through Arizona and New Mexico then east, all the way to Tennessee. On their travels they pick up a hitchhiker (Laurie Bird) and then encounter “GTO” (Warren Oates) an older fellow driving a bright yellow 1970 Pontiac who passes them on the road and waves as if to taunt them. Later on when the men catch up, a competition is suggested in which they make a bet on a cross country race to Washington D.C., with the winner getting the pink slips (ownership) to the other car.

Interestingly, the film, which takes place mostly on the road, has no score, it only features some minimal background music. For example you can hear The Doors’ “Moonlight Drive” in one scene and Kris Kristofferson’s “Me and Bobby McGee” in another playing on a stereo. I think the choice to not include sounds playing over the film definitely adds to the sense of quiet realism it conveys but also to its detriment, causes you to lose interest in certain sections. When we’re driving along with these characters, they hardly speak, all we really hear is the squeaking of the chasis, and if you’ve been in this situation yourself you know it’s rather boring. Neither Taylor or Wilson were particularly good actors (they even flub lines), but they do deliver mostly believable performances if you take them for blank, aimless drifters. Their character personalities are clearly meant to be minimalistic but it comes across as if they’ve cut off all human emotion and refocused everything into the car they live in, which makes sense but also doesn’t provide a lot in terms of development. Any dialogue spoken is about what’s going on with the car’s functionality rather than their real thoughts and feelings. To some that may come across as cool and detached but I just found it lifeless and dull. Co-star Laurie Bird plays the typical hippie chick of the era, someone who seems to bounce from place to place, (and man to man) carefree and aloof. The film’s saving grace is definitely Warren Oates’ GTO, the oldest of the group and who provides the conscious emotional charge the film desperately needs. I feel if he hadn’t been in the film it would’ve been a completely empty experience.

I've continued to ask myself what is it about Two Lane Blacktop that makes it such a cult favorite? Is it just something that hipster film fans claim to love without really knowing the reasons why? Well first I do think it needs to be seen more than once to get some kind of general appreciation for what the filmmaker wanted to express. The movie is beautifully shot and edited (there’s some honestly incredible imagery of the heartland and people who inhabit it) yet at the same time it feels devoid of purpose. It comes across as just a meandering story about some rather uninteresting people living on the highway in total freedom and their obsession with cars. I honestly didn’t care about these characters at the beginning and I still didn’t at the end. My view is if you happen to be a hardcore gearhead you might find it much more entertaining to watch than your average movie fan. Personally I find films like Easy Rider (bikes, not cars), Vanishing Point or even Dirty Mary Crazy Larry are just more satisfying road movies. These other films actually share what I call the “New Hollywood dead end” theme with Two Lane Blacktop but don’t play the pretentious arthouse meditation angle and contain much more excitement and overall impact.